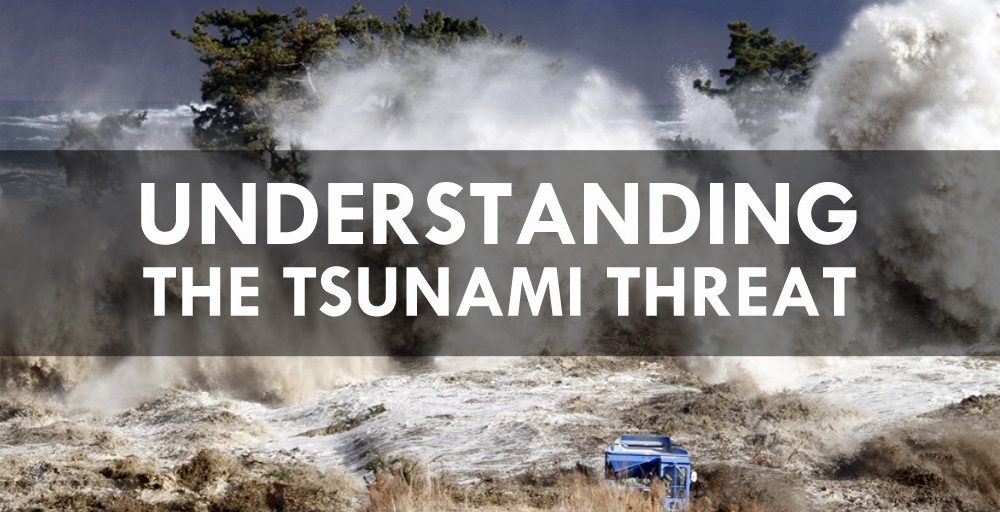 Just after midnight on August 17, 1976, a magnitude 8 earthquake shook the areas around Moro Gulf in Mindanao, including Cotabato City. But the disaster did not stop there; less than 5 minutes later, a tsunami as high as 9 meters roared and swallowed 700 kilometers of coastline. When the sea ebbed to its peaceful state, around 8,000 had died from the combined effects of the earthquake and tsunami, with the latter accounting for 85% of deaths and 95% of those missing and never found. The event, now known as the 1976 Moro Gulf Earthquake, is recognized as the deadliest earthquake that ever hit the country. 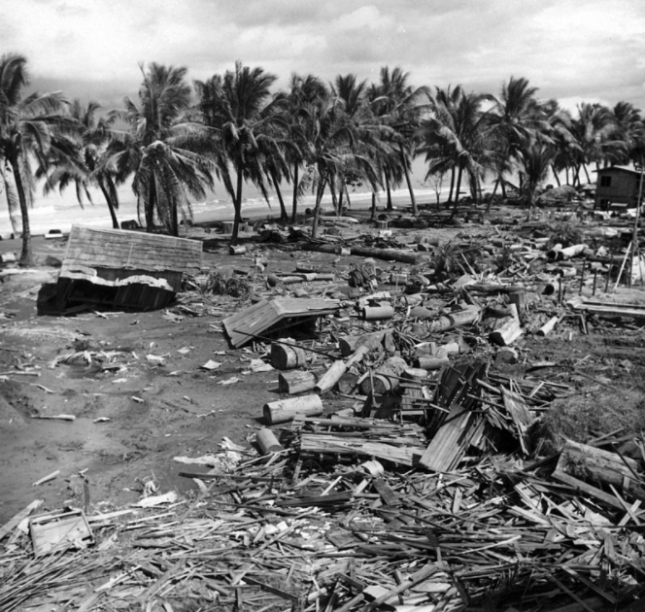 Devastation of the 1976 tsunami at Barangay Tibpuan in Lebak, Mindanao (Photo from Wikimedia Commons)

Almost two decades later on November 15, 1994, Mindoro was rocked by a magnitude 7.1 earthquake. Like what happened in Mindanao, majority of the 78 casualties of the Mindoro earthquake was due to the 8-meter high tsunami that occurred 5 minutes after the quake.

The truth is, though Filipinos are aware of devastating tsunami happening in other countries like Japan and Indonesia, they do not often associate these natural disasters in their homeland. But as past events indicate, deadly tsunami can occur locally. As Undersecretary of the Department of Science and Technology (DOST) for Disaster Risk Reduction-Climate Change Adaptation (DRR-CCA) and Officer-In-Charge of the Philippine Institute of Volcanology and Seismology (PHIVOLCS) put it, “Tsunami are very fast in the Philippines and we need to prepare for them.” 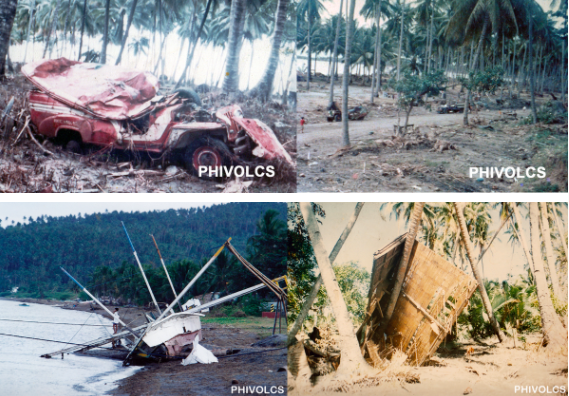 In observance of World Tsunami Awareness Day last November 5, PHIVOLCS organized an online press conference to spread the word about tsunami. Mostly generated by under-the-sea earthquakes, tsunami are characterized by a series of waves with heights of more than 5 meters. According to Solidum, such earthquakes can be triggered by underwater landslides, volcanic eruptions, and the more unlikely meteor impacts. These cause the seafloor to lift, causing the water it carries to rise.

There are two types of tsunami—the distant and local. Distant or far-field tsunami is generated outside the Philippines, mainly from countries bordering the Pacific Ocean like Chile, Alaska (U.S.) and Japan.  With these events being monitored by The Pacific Tsunami Warning Center (PTWC), the Philippines has 1 to 24 hours of preparation before the tsunami’s arrival, depending on its origin.

But with local tsunami, lead time is cut down to a mere 2 to 10 minutes after the earthquake. “Preparedness is very important because rapid response is needed for locally-generated tsunami. The trenches are where the large earthquakes and tsunami can be generated, and we are only the country wherein trenches can be found on both sides. Hence, both sides of the country need to prepare for tsunami. Aside from that, the eastern side of the country faces the Pacific Ocean or the Pacific Ring of Fire where earthquakes and tsunami can also be generated,” said Solidum.

What PHIVOLCS is doing

Part of the Tsunami Risk Reduction Program of PHIVOLCS are the Tsunami Hazard Mapping and Modeling, and the Tsunami Hazard Risk Assessment, both of which aim to understand tsunami, manage their hazards and risks, and identify priority actions for response and recovery. To detect possible tsunami, PHIVOLCS set up its Monitoring and Detection Networks Development.

Aside from the 107 seismic stations that receive data for earthquakes and tsunami, there are also 29 real-time tide gauges all over the country.  Through the hazards and risk-assessment software code REDAS, PHIVOLCS can evaluate potential earthquake hazards, create tsunami simulations, and predicting the number of affected people. “The total population exposed to tsunami would be close to 14 million,” said Solidum. “But they will not be affected at the same time. It would depend on where the tsunami would occur. In NCR, for example, the prone population would be around 2.4 million. And the next highest would be 1.6 million in Region VII, 1.2 million in Region VI— and in Region IXA, around 1 million.”

Meanwhile, HazardHunter Philippines, which is open for public use, can assess hazards depending on the user’s specific location. “HazardHunter can also give you a more detailed tsunami hazards assessment because it can provide you a map showing the different areas that will be affected by different tsunami heights. It is color coded, indicating areas prone to various tsunami heights.” Solidum appealed to the public to take advantage of the “Report a Disaster” website. Here, people can post pictures and videos of current risks and hazards in their areas, and describe disasters impacts, which can help the government’s risk and impact assessments. 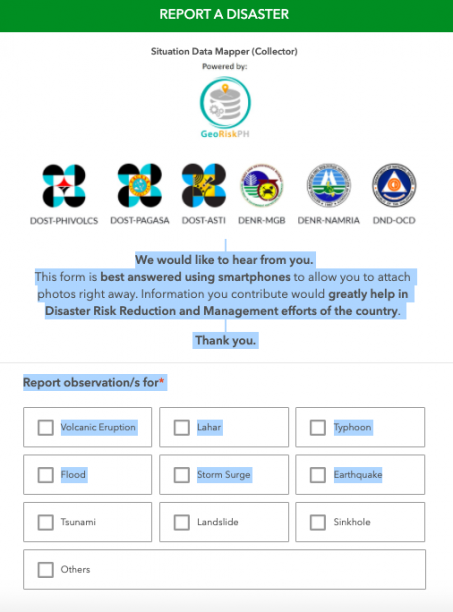 “In the Philippines, we use a simple tsunami information or warning scheme,” explained Solidum. “We will evacuate once the tsunami information is categorized as a tsunami warning. We expect a destructive tsunami of more than 1 meter and this would need immediate evacuation of coastal areas. Boats at sea are advised to say offshore — in deep waters.”

Because local tsunami can be very fast, people need to know its natural signs:

Shake – refers to a strong earthquake.

Roar – refers to the unusual sound of the returning wave, which indicates a tsunami.

After an earthquake, Solidum recommends for people near the shore to immediately move to elevated ground inland, or take refuge in tall and strong buildings. “If they have not moved at all, once they hear the tsunami and there are unusual sounds, there might not be enough time. They really need to respond immediately,” warned Solidum.


3. Never go down the beach to watch for a tsunami. When you see the wave, you are too close to escape it.


4. During the retreat of sea level, interesting sights are often revealed. Fishes may be stranded on dry land thereby attracting people to collect them. Also sandbars and coral flats may be exposed. These scenes tempt people to flock to the shoreline thereby increasing the number of people at risk.

Solidum stressed the importance of community-based preparedness, built on planning and drills to create the following output:

The devastation of several typhoons this year, coupled with the country’s location in the Pacific Ring of Fire, are proof that the Philippines is prone to various hazards. Because of the

COVID-19 pandemic, Solidum admitted that PHIVOLCS had to rethink their training methods.  “Before, we actually go down to various coastal communities and conduct lectures in the evening, so that people who worked in the daytime can also attend. But the pandemic has enabled more people to listen because of the social media platform and our webinars. We’ve reached more people in terms of information campaign. But we hope that local government disaster managers will do the actual preparedness at the community level.”

Solidum noted that though COVID-19 continues to cause loss of lives and the disruption of public services, mobility and economic development, tsunami can create far more devastating impacts. “We will see the physical impacts through buildings, infrastructures, property, water supply pipes, electrical supply, communication system, roads, bridges, and ports. This is in addition to the physical impact on people because of the collapsing houses or the impact of the large volume of water. We have science, technology, and innovation from DOST that can help in preparedness and disaster risk reduction. We need to use it, but we need to share this information to the communities and the public,” he ended.