As of 3:00 a.m. today, a Tropical Depression was spotted at 2,015 kilometers east of Southern Luzon. According to PAGASA Weather Forecaster Loriedin Dela Cruz, though the Tropical Depression is not expected to make landfall, it may enter the Philippine Area of Responsibility (PAR) tomorrow afternoon (September 23). Once it becomes a Tropical Storm, it will be called by its local name, “Paeng”. 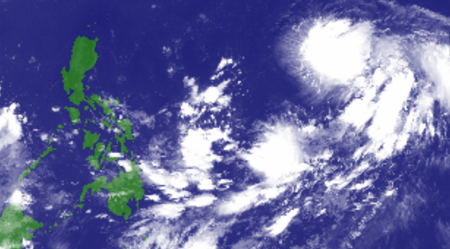 Partly cloudy to cloudy skies with isolated rain showers will be experienced in Metro Manila and the rest of the country. 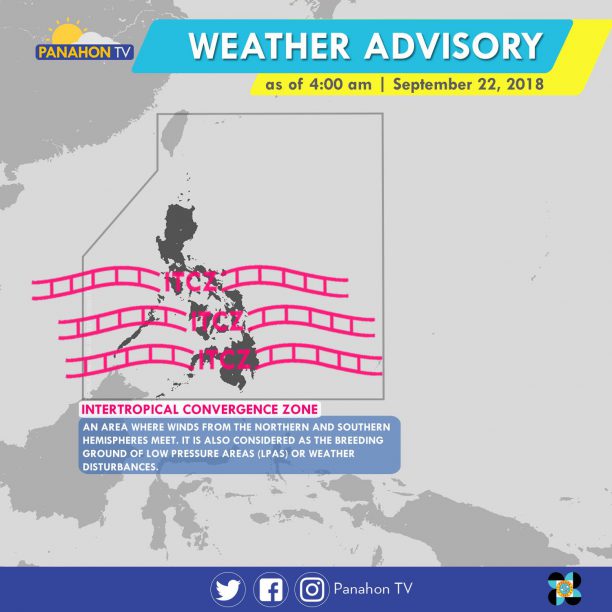 After bringing rains in Bicol Region, portions of Visayas and Mindanao, Tropical Depression Bising has weakened into a Low Pressure Area (LPA).

At 4:00 AM today, the LPA was estimated at 725 kilometers east of Juban, Sorsogon. In the next hours it will still bring cloudy skies with light to moderate rains and isolated thunderstorms in Eastern Visayas, Caraga and the province of Palawan.

PAGASA earlier explained that Bising recurved due to the strong wind shear near the Philippines, pushing tropical cyclones away from the landmass.

Strong to gale force winds associated with the surge of the Northeast Monsoon are also bringing rough to very rough seas in these provinces:

More than five years in the making, the undefeated American boxer Floyd “Money” Mayweather Jr. will finally exchange blows with eight-time, eight-division champ Manny “Pacman” Pacquiao. As the entire nation eagerly anticipates the battle, here’s a quick guide to one of the biggest boxing fights in decades.

IN A NUTSHELL: ALL YOU NEED TO KNOW ABOUT THE FIGHT OF THE CENTURY

WHEN:
The two best pound-for-pound fighters in the world will face off in the Welterweight showdown on Saturday night (May 2) in Las Vegas. The fight will air in the Philippines on Sunday, May 3.

MAYWEATHER: Orthodox.
One of the most common stances in boxing, the right-handed Floyd will be leading with the left side of his body. Michael Olajide Jr. of Vogue writes Floyd is a “consummate boxer. Abides by the rule, ‘Hit and don’t get hit.’ Defense before offense.”

Meanwhile, Sean Wagner-McGough of CBS Sports describes Mayweather as “the crafty, savvy boxer, a defensive wizard. But if anyone can break is going to break through the defense and land some meaningful blows on Mayweather, Pacquiao is the guy.”

PACQUIAO: Southpaw.
Manny is left-handed but he will be leading with the right side of his body. Olajide states “Pacman attacks suddenly with speed and power from awkward angles, which makes his punches hard to defend against. Offense is everything.”

Wagner-McGough adds that Pacquiao, being “one of the most aggressive, offensive forces of his generation, is the perfect contrast to Mayweather’s conservative style. It won’t be easy. You don’t connect often on Mayweather so he has to be even more active.”

THE VIEWING:
With ticket prices soaring and selling like hotcakes within a mere 60 seconds, the Mayweather – Pacquiao mega bout smashed all Pay-Per-View records. The fight will also be aired live in public on wide screen TVs. Fans can also watch and reserve tickets in participating bars, restaurants and hotels.

THE EARNINGS:
It is considered the biggest fight of this century and the biggest cash cow in boxing history. But Mayweather will earn a bit more than Pacquiao due to the 60/40 split they agreed on.

THE CHAMPIONSHIP BELT:
Costing a million dollars, the especially designed championship belt presents one-of-a-kind features.
Crafted in Mexico, the belt is made with green leather, the same material used in Ferraris, and studded with 3,017 Emeralds. It also contains 800 grams of Gold and some silver.

Representing the countries affiliated with the WBC, it showcases 165 national flags, and features the faces of former WBC president Jose Sulaiman, Mayweather, Pacquiao and the legendary Muhammad Ali.

THE ODDS:
Aggression, speed, angles and feints are the key points for Pacquiao to win this bout. Meanwhile, Mayweather will have to focus on countering, timing, and impeccable defense.
Mayweather remains to be the undefeated man, knowing for throwing harder punches as suggested by his KO ratio. However, Pacquiao’s offensive style is one that Floyd has never fought before.

But whether or not the fight will result into win for our country, Panahon TV reminds us to gear up for our yearly bout with May weather.

This month is the peak of the Hot and Dry Season; so maximum temperatures are likely to be recorded at this time. In Metro Manila, the forecast temperature plays between 23 to 36 degrees Celsius.

The country will continue to experience warm and humid weather conditions due to the prevailing Easterlies. These are warm winds blowing from the east that pass through the Pacific Ocean, generating thunderstorms mostly over the eastern section of the Philippines.

The Ridge of High Pressure Area may also reach the northern regions. This weather system is characterized by very light winds and clear skies.

Meanwhile, the axis of the Intertropical Convergence Zone is also expected to affect the southern regions of the archipelago. ITCZ is the breeding ground of Low Pressure Areas (LPA) and tropical cyclones. This is brought about by the convergence of the winds coming from the northeast and southeast that causes thunderstorm formations.

LPAs may be expected to form and affect the country, with a chance of intensifying into a tropical cyclone or bagyo. During the month of May, the Philippines has an average of 1 to 2 tropical cyclones, with the forecast track record of hitting Southern Luzon and Central Visayas.

From the second week to the latter part of May, frequent thunderstorm formation occurs. Simply put, this month will have more rains experienced compared to April. Normal rainfall in Metro Manila is 174.98 millimeters but with the existence of the El Niño, forecast rainfall in the said area plays between 144.2 to 159.4 millimeters this month.

Metro Manila and the rest of Luzon can expect, at times, cloudy skies and isolated light rains.

On the other hand, the rest of Visayas and Mindanao will enjoy fair weather, apart from isolated cases of rains or thunderstorms.

Meanwhile, PAGASA Weather Forecaster Meno Mendoza shares that the expected monthly rainfall and average temperature in the Philippines this month will be below normal to normal range, particularly in the eastern sections of the country.

Temperatures in the mountainous areas of Luzon will still be slightly cooler, while the lowland areas can expect near normal temperatures, he added.

Visayas will have slightly warmer weather as Mindanao can expect near normal temperatures this March.

Ruby continues to weaken as it traverses the landmass of Southern Luzon. With maximum sustained winds of 60 kph, Ruby is now downgraded to Tropical Depression, the lowest category of Tropical Cyclones.

PAGASA Weather Forecaster Glaiza Escullar said the weakeaning of Ruby is due to the friction between the landmass and the weather disturbance, and the intrusion of the northeast monsoon or amihan–cold and dry air mass that is not favorable to cyclone intensification.

At 4 AM today, Ruby was located at 80 kilometers southwest of Ambulong, Tanuan City in Batangas, moving westward at 13 kph. (FOR REVISIONS PAG MAY LATEST LOCATION)

Escullar confirmed that if Ruby maintains its velocity, it is expected to exit the Philippine Area of Responsibility on Wednesday.

Apart from those under Public Storm Warning Signal no. 1, the rest of Central Luzon, Bicol Region and MIMAROPA will have cloudy skies with light to moderate rains and thunderstorms.

Because the amihan is now affecting Northern Luzon. cold weather and light rains are expected over Cagayan Valley, the Cordillera and Ilocos Regions.

Here is a list of areas that accumulated the highest rainfall during the passage of Ruby.

If it maintains its speed and direction, it is expected to enter the Philippine Area of Responsibility (PAR) tomorrow, Thursday, and will be given the local name “Ruby”. Upon entering the PAR, the typhoon will bring moderate to occasionally heavy rains over Southern Luzon and Visayas.

In a press briefing held earlier today at the PAGASA Weather and Flood Forecasting Center, two scenarios are still expected to happen. However, most meteorological models show a higher chance of landfall activity.

PAGASA Weather Forecaster Aldczar Aurelio said the first possible outcome is the typhoon making landfall over Eastern Visayas, bringing moderate to occasionally heavy rains. Aside from possible flash floods and landslides, storm surges of up to 3 to 4 meters could also occur.

On the other hand, the second scenario shows that if the high pressure area (HPA) weakens, it will give way for Hagupit to re-curve away from the country, leading to Japan. Everyone is advised to monitor updates regarding the approaching typhoon.

No direct effect yet

Hagupit is still far to directly affect the country. However according to PAGASA Weather Forecaster Glaiza Escullar, the outer cloud band of the typhoon is gradually reaching PAR, bringing cloudy skies with light to moderate rain showers and thunderstorms over Eastern Visayas.

Meanwhile, the northeast monsoon or amihan continues to prevail over Nothern and Central Luzon. Cagayan Valley will have cloudy skies with light rains while the regions of Cordillera, Ilocos and Central Luzon will experience partly cloudy to cloudy skies with isolated light rains. Metro Manila and the rest of the country will be partly cloudy to cloudy with isolated rain showers or thunderstorms.

Gale warning includes the seaboards of Northern Luzon and the eastern seaboard of Central Luzon. Fishing boats and other small seacraft are prohibited from venturing over the seaboards of Batanes, Calayan, Babuyan, Cagayan, Ilocos Norte, Ilocos Sur, La Union, Pangasinan, Isabela and Aurora.

Based on the climatological records of PAGASA, Typhoon Camilla (1949), Typhoon Aning (1966) and Typhoon Seniang (2006) have almost the same location where Hagupit would originate as it enters the PAR.