Despite material advances and the amassing of unprecedented wealth, serious global problems remain unsolved. This is all the more striking when it is seen alongside worldwide efforts to maintain peace, resolve conflicts and end poverty by major international peace-keeping bodies, public and private.

Territorial disputes, religious and racial discord, the collapse of family values, and an aggregate of environmental issues are flaring up on all continents. Added to this is the COVID-19 pandemic which has caused catastrophic economic debt. It seems like a perfect storm.

Just such dilemmas drew the late Rev. Dr. Sun Myung Moon and his wife Dr. Hak Ja Han Moon to speak out for the realization of an ideal world. Their vision: one human family bound together by the love of God. For decades, they have advocated the philosophy of interdependence, mutual prosperity, and universal values which challenges us with the novel concept of seeing our own purpose in life fulfilled in the well-being of others.

To emphasize these values and help address related problems, the Universal Peace Federation (an NGO in general consultative status with the Economic and Social Council of the United Nations), will be hosting the latest in a series of on-line virtual summits. The Rally of Hope will be held August 9, 2020 beginning at 8:40 AM (Manila time). The official theme is, “One Million Rally of Hope for the Realization of a Heavenly Unified World of Interdependence, Mutual Prosperity, and Universal Values.” 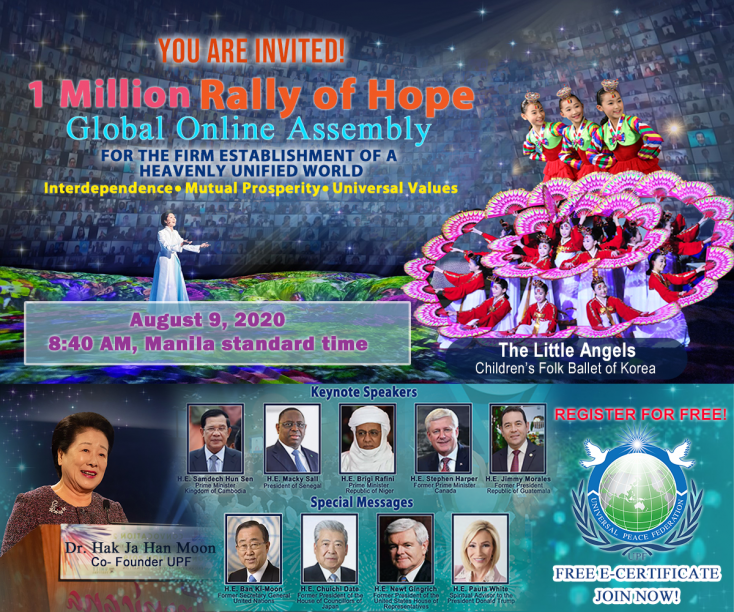 Ban Ki-moon, former UN Secretary-General and Chairman of the National Council on Climate and Air Quality in Korea, will give the welcome address. Following this, Rev. Paula White, spiritual advisor to President Donald Trump, will give her special remarks. Congratulatory messages from the Hon. Chuichi Date, former President of the House of Councillors of Japan, and the Hon. Newt Gingrich, former speaker of the United States House of Representatives will follow.

Interspersed with first-class entertainment, keynote addresses will be given by H.E. Hun Sen, Prime Minister of Cambodia; H.E. Macky Sall, President of Senegal; the Hon. Brigi Rafini, Prime Minister of Niger; H.E. Dick Cheney, former Vice-President of the United States of America; and other world leaders. Finally, Dr. Hak Ja Han Moon, co-founder of the Universal Peace Federation and host of the Rally, will give her keynote address.

E-certificates will be available upon request. In addition, all participants will have a chance to learn more about the Universal Peace Federation and its worldwide movement.

To register for the Rally of Hope visit http://www.upfasia.org/rallyofhope-register.

Ready for the COVID-19 Vaccines

How Safe Are You this Pandemic?

I Won’t Be Home for Christmas