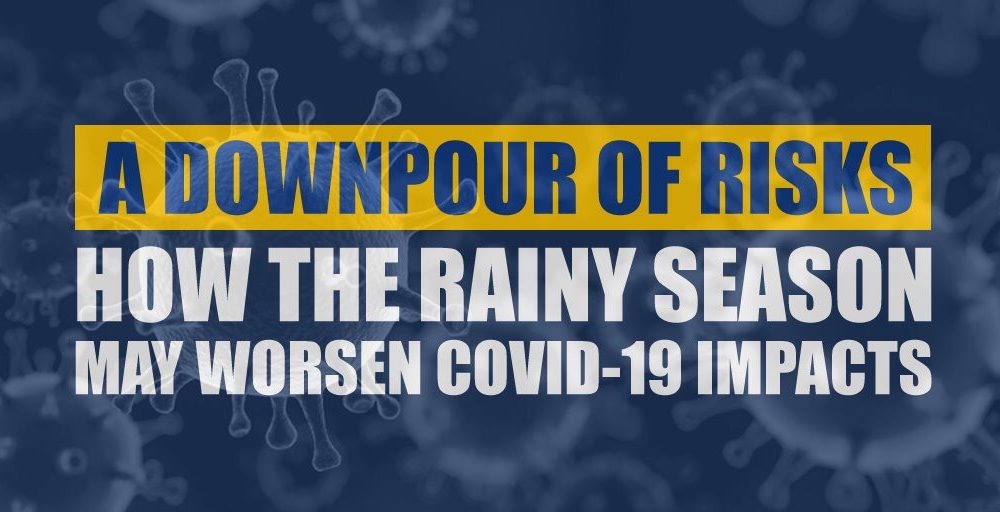 Managing the rainy season this year is vastly different from the previous ones as the Coronavirus Disease 2019 (COVID-19) continues to pose threats on the country’s public health, economy, and environment. During this time, tropical cyclones, combined with the enhanced southwest monsoon (habagat), are expected to bring floods, storm surges, destructive winds, and landslides which may hamper efforts in curtailing the spread of the virus. According to the Philippine Atmospheric, Geophysical and Astronomical Services Administration (PAGASA), 6 to 10 cyclones may enter the Philippine Area of Responsibility (PAR) from July to August. Additionally, there is a 50% chance that La Niña may develop in the last quarter of the year, bringing wetter conditions in the eastern section of the country.

Typhoon Season. Two tropical cyclones have traversed the PAR since the first COVID-19 case in Manila on January 30. Typhoon Ambo, internationally known as Vongfong, made landfall six times on May 14 and 15, while Tropical Depression Butchoy hit the landmass twice on June 11. Both pummeled the coronavirus-stricken Luzon.

Aylen Labiano, who has been selling agricultural products beside an ecotourism road in Lucena, Quezon for nearly a year now, recounts in Filipino how Bagyong Ambo impacted her livelihood. “The recent cyclone devastated vegetation and banana trees, which prompted suppliers and sellers to raise prices. But people want low-cost food since a lot of them lost their jobs, and the situation has not yet normalized. If typhoons continue to ravage our livelihood, we will not be able to make ends meet.” 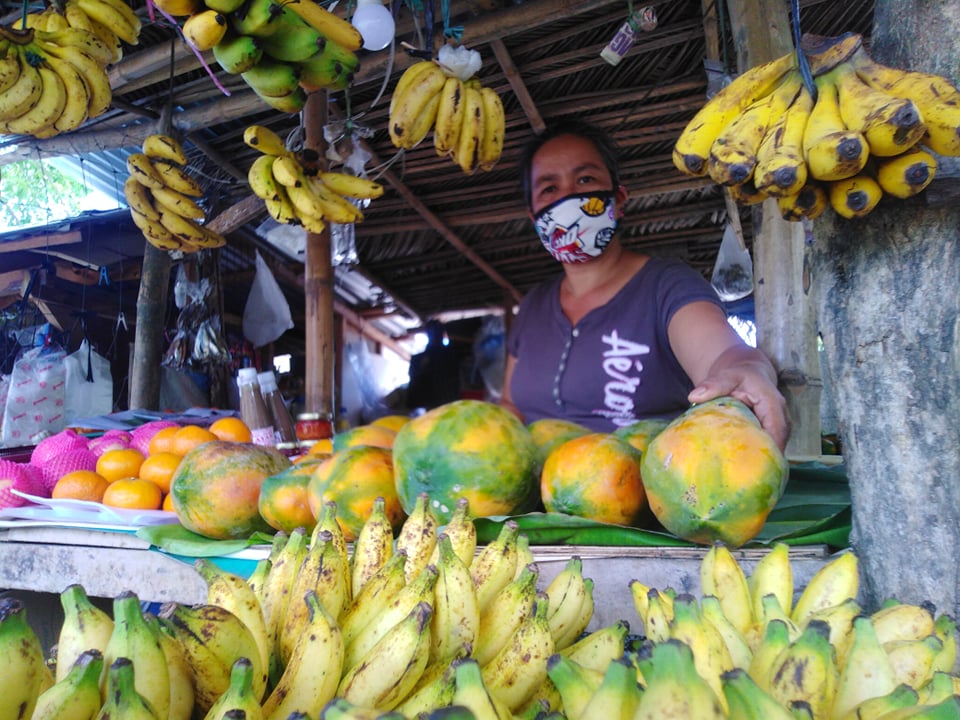 Agricultural Uncertainty. Agricultural loss due to Typhoon Ambo is estimated at Php1.37B.

19-year old Carl Ian Pedregosa from San Francisco, Quezon shares how his family monitored the news to prepare for the typhoon. “But when the rains arrived, we experienced power outage, which lasted for more than a week. Some coconuts, which were supposed to be extracted for oil, also fell during the storm. We fed them to the hogs instead.” Pedregosa also worries about how power interruptions can not only make it difficult for his family to stay updated, but also disrupt his education in the coming school year, especially with academic institutions planning to utilize online learning.

Felled coconut trees in Quezon Province, one of the top agricultural producers of copra in the country.

While studies say that rain may help dilute the virus on contaminated surfaces, it also favors other diseases that may strain our healthcare system.

Monsoon Diseases. With the rains comes a downpour of diseases, ranging from the easily curable, such as diarrhea and cough, to the downright deadly, including leptospirosis and typhoid fever. Meanwhile, the World Health Organization (WHO) clarifies that there is still no evidence supporting the possible transmission of COVID-19  through mosquitos and houseflies. To date, no peer-reviewed studies have proven that the ongoing seasonal change has weakened the potency of the virus, and if it can interact with other viruses to develop worse symptoms.

But the real problem lies with how symptoms of monsoon diseases are almost similar to those of COVID-19’s. “Whether people tested positive or negative for COVID-19, we will need to test them for other possible diseases which will make the process longer,” states Dr. Generoso Roberto of the Philippine Society of Public Health Physicians (PSPHP).

The Department of Health (DOH) targets to license 65 COVID-19 testing laboratories by the end of July to test 1.5 to 2% of the population. To date, there are 62 accredited labs with a rated testing capacity of 50,000 daily, prioritizing suspect cases, individuals with travel history, and healthcare workers with possible exposure, whether they are symptomatic or asymptomatic. However, there is still a gap between rated and actual capacity with 12,000 to 16,000 people tested a day due to manpower and supply chain issues— problems that arise globally.

Confirmed Symptoms. The United Kingdom has included anosmia, or loss of taste or smell, as a predictor for COVID-19. Experts say that patients infected with COVID-19 usually transmit the disease before their symptoms manifest, their ability to infect peaking until the third day after symptoms start showing.

“We also need to plan where we’ll be admitting patients diagnosed with other diseases if certain hospitals are designated as COVID-19 treatment sites,” Dr. Roberto explained. Meanwhile, people living in rural areas, especially in remote islands, will face the challenge of transporting patients and doctors to the barrios during the typhoon season. “This means that patients can develop severe symptoms by the time they’re brought to healthcare facilities,” Dr. Roberto explained.

Though virtual healthcare seeks to keep patients at home, the system is not inclusive of, and accessible among the marginalized. According to the Speedtest Global Index, upload and download speeds for mobile and fixed broadband in the country are still below the global average. The Social Weather Stations (SWS) also shows that only 22.4% of Filipino families in the country owns a personal computer at home.

The country is still on its first wave of COVID-19 cases when the government gradually eased quarantine measures, allowing some businesses to reopen. Though this move aims to save the economy from socioeconomic impacts, such as unemployment and hunger, it may also worsen, not only the health crisis, but also disaster risks.

“We need to do scenario building or disaster imagination so we can prepare for complex emergencies,” says Science and Technology Undersecretary Renato Solidum, Jr. in Filipino. Government and private sectors should have continuity plans for their public service and businesses since the pandemic may coincide with hazards that often transpire in the country, such as earthquakes, tsunamis, and volcanic eruptions.

On March 11, days before the Enhanced Community Quarantine (ECQ) in Luzon, volcanologists placed Mount Kanlaon in Negros Island under Alert Level 1, prohibiting people around its 4-kilometer-radius danger zone for possible sudden phreatic eruptions. A series of volcano-tectonic quakes has been observed since June 21. Meanwhile, Mayon Volcano has been under Alert Level 2 since March 2018.

Urbanized cities are highly exposed both to the pandemic and the negative impacts of natural hazards due to their dense structures and population. According to Solidum, the government’s Balik-Probinsya program may be a good solution to decongest cities as long as comprehensive safety protocols are strictly employed. This program, institutionalized through Executive Order No. 114, seeks to encourage people, especially the informal settlers, to return to their home provinces.

Metro Manila, considered as the seat of government, is no exception to looming catastrophe. Here lies the biggest portion of the West Valley Fault (WVF), an active earthquake generator traversing Bulacan, Quezon City, Marikina, Pasig, Taguig, Muntinlupa, Rizal, Laguna, and Cavite. These areas are part of the Greater Metro Manila Area (GMMA), a megacity with an estimated population of 20 million. About 35% of its populace are informal settlers, many of them living below poverty line.

WVF’s massive earthquakes occur every 400 to 600 years. Its last movement that caused a magnitude 5.7 quake was in 1658 or 362 years ago. According to a joint study by Australia and the Philippines, the fault’s next movement may produce a magnitude 7.2 earthquake, resulting in 34,000 deaths due to collapsed buildings—and an additional 18,000 fire-related fatalities in the metropolis. Furthermore, infrastructures, lifelines, and about 40% of residential buildings are likely to be heavily or partially damaged, causing 2.3 trillion pesos worth of damage. The management of such a huge disaster requires close coordination, which the current pandemic hampers.

If protocols are not properly implemented and followed, evacuation centers during disasters coupled with monsoon diseases may be a breeding ground for more health risks. A person with COVID-19 may infect dozens of people, including Disaster Risk Reduction and Management (DRRM) officers who are on the frontline during rescue and relief operations.

DRRM offices help by providing transportation for COVID-19-related patients, manning centers for Persons Under Monitoring (PUM), and disinfecting public spaces, among others. But if a natural disaster strikes, people like Alex will even have a more difficult time doing their duty. “It will be hard for the DRRM frontliners responding with merged Search and Rescue and COVID-19 personal protective equipment. We also worry about funds because we’ve already spent so much during the Taal eruption, assisting 11,000 evacuees, followed by the pandemic response.“ 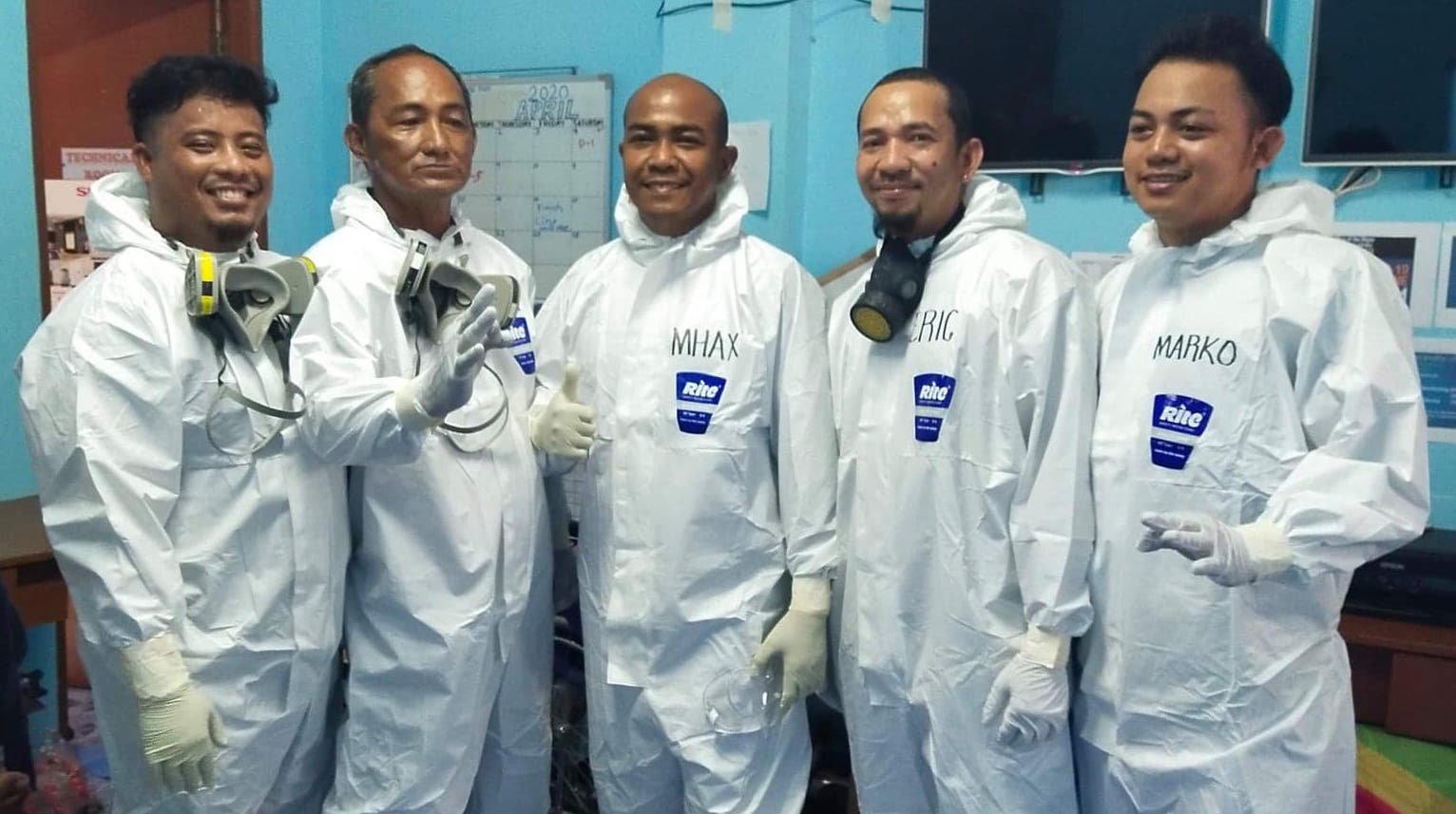 The Need for Disaster Imagination

Solidum explains that disaster imagination means preparing for worst-case scenarios and their possible impacts. “People and the Local Government Units (LGUs) should know the hazards in their areas so they can plan appropriately. What if an earthquake transpires? What are its impacts? Have we identified the vulnerable population? Where are we bringing them?”

A study conducted by the International Organization for Migration (IOM) in 2014 exposed that more than 90% of evacuation sites in Eastern Samar were partially or completely devastated during the onslaught of Typhoon Haiyan, locally known as Yolanda. These were churches, schools, and community centers, which were identified by LGUs as safe.

On June 13, the Office of Civil Defense (OCD) provided LGUs with guidelines so they can meet the health standards of the COVID-19 National Task Force in conducting online Pre-Disaster Risk Assessment. This allows LGUs to prepare their inventory of resources, logistical requirements, relief packs, and evacuation centers. “If we conduct pre-emptive evacuation, we see to it that everybody is protected. We should be observing social distancing and we limit the number of people in the evacuation centers. We also see to it that our responders are protected,“ says OCD’s Operations Service Director Harold Cabreros.

Risk Management during the Pandemic

The Philippine Institute of Volcanology and Seismology (PHIVOLCS), PAGASA, and the Mines and Geosciences Bureau (MGB) have developed Hazard Hunter, a tool that Filipinos can use to assess seismic, volcanic, hydrometeorological, and climatological hazards in their locations. It is free and readily- available online, especially useful for property owners, buyers, land developers, planners, and other stakeholders.

It is also important to know what to do before, during, and after several natural hazards. 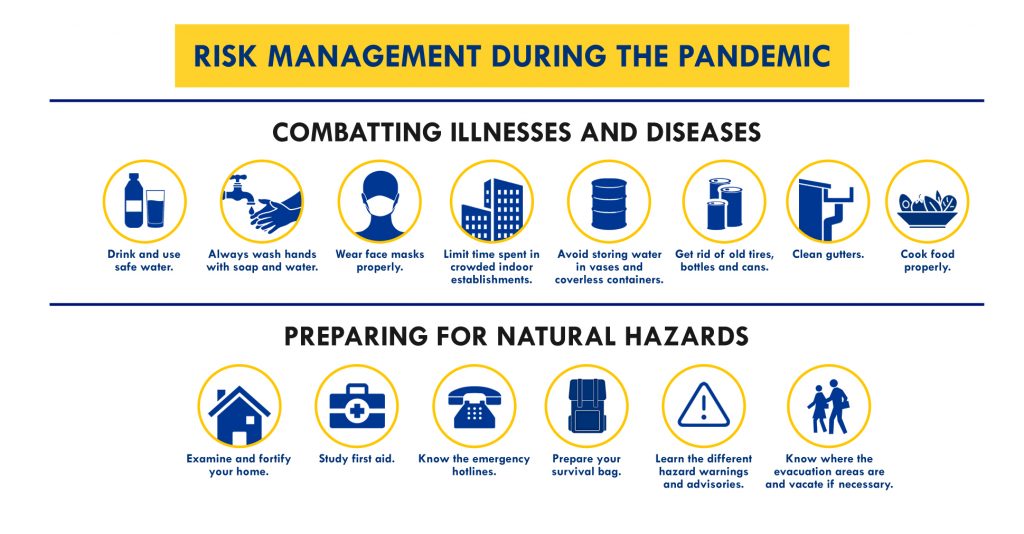 This global crisis is not just about adapting to changes, but also preparing for complex emergencies. With inclusive, sustainable solutions, everyone—even the weakest—can be empowered to rise up to the challenges.

Mayon Volcano is about to erupt. Are you ready?

Weathering the Changes of 2017

Top 8 Deadliest Storms in the Philippines