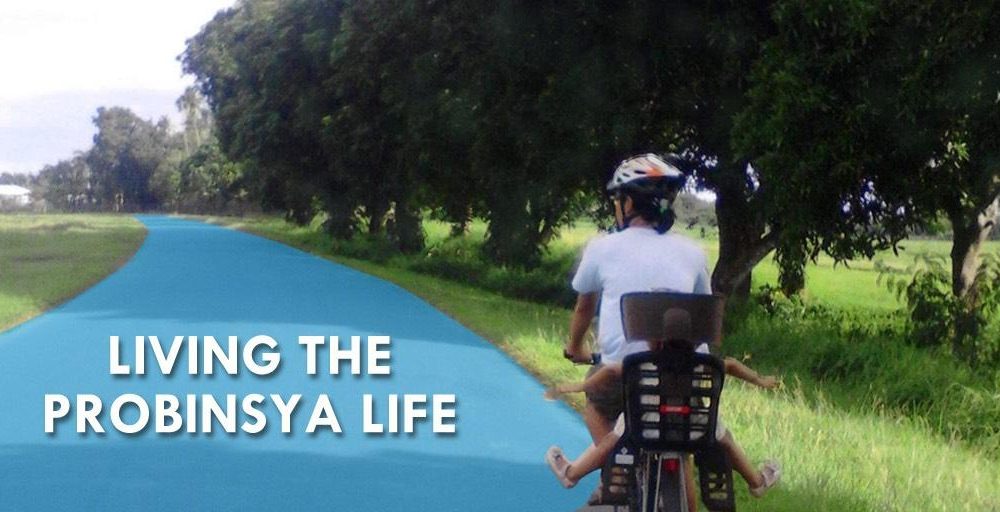 The new year is just around the corner, which means most people are making plans and resolutions to spark positive changes in their lives. By letting go of attitudes, habits and situations that no longer serve them, people are better attend to their needs, improving the quality of their lives.

One significant change some make is to literally move beyond their comfort zones—and by that, we mean changing their places of residence. According to a survey released by the Philippine Statistics Authority in 2012, internal migrants were at a whopping 2.9 million between 2005 and 2010. While 45.4% merely changed cities, more than half (50.4%) were long-distance movers who changed provinces. The latter movers came from Calabarzon at 27.7%, the National Capital Region (NCR) at 19.7%, and Central Luzon at 13%.

NCR is the top choice of migrants outside Metro Manila, as shown by the World Bank’s Philippines Urbanization Review in 2017. In the previous decade alone, the country’s annual increase of urban population was at 3.3%, making the Philippines as one of Asia-Pacific’s fastest urbanizing countries.

But what about the second-biggest population of long-distance movers who moved out from NCR? Their significant number shows that there are Filipinos who choose to trade the modern conveniences of city life for the slower-paced rural setting. We get to know some of these brave migrants, and the steps they took to make such a major change. 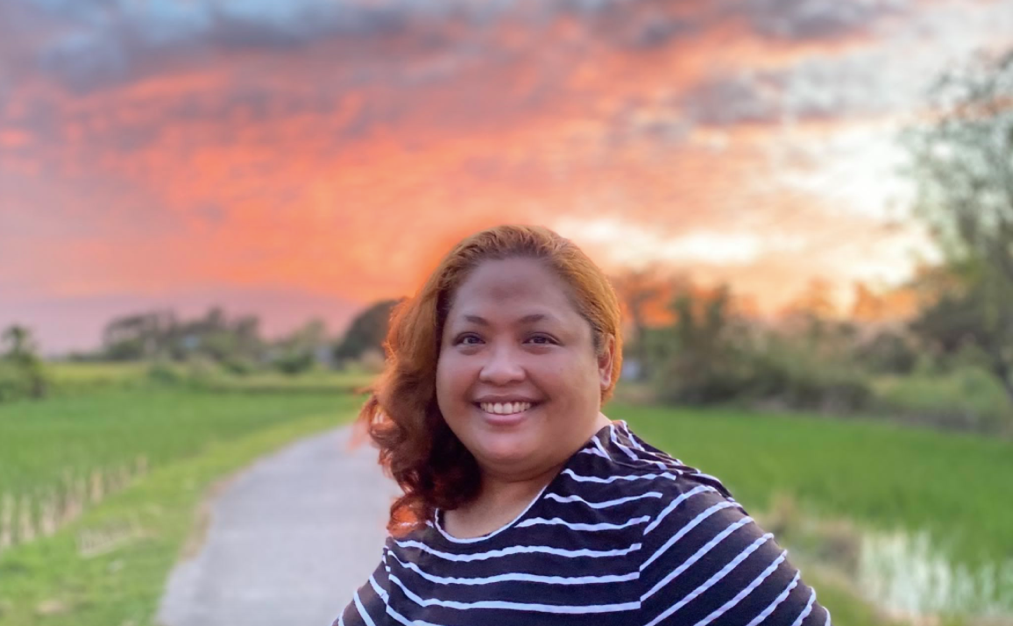 Residence history: I was born and raised in Quezon City right up to when I started working in Makati. I eventually had to move away from our childhood home to be nearer my work. I was pretty much the city girl and enjoyed having everything accessible.

In 2007, I decided to try out the probinsya life with my family. We moved to Negros, in a house by the sea. I woke up to and was lulled to sleep by the sound of the waves— and I loved it. After about a year, I got pregnant with my second child. Just then, job offers in Manila started coming in, so I decided to move back to the city. My family followed, and we settled back in my childhood neighborhood.

Reason for moving to Pangasinan: I’ve been working from home full time. Meanwhile, my favorite cousin put up a farm in their family property in Pangasinan. My family and I would go for short visits and I would always enjoy my time there. My cousin needed help running the farm, and one of my sisters and I were getting really tired of the city life so we floated around the idea of moving to the farm for months before finally deciding.

Also, my kids were growing up and needed their own space. I needed my own space too and with how multi-bedroom rentals are in Manila, there was no way I could afford them. That and the fact that my sister and I can work anywhere as long as we have internet cemented our idea for the move. 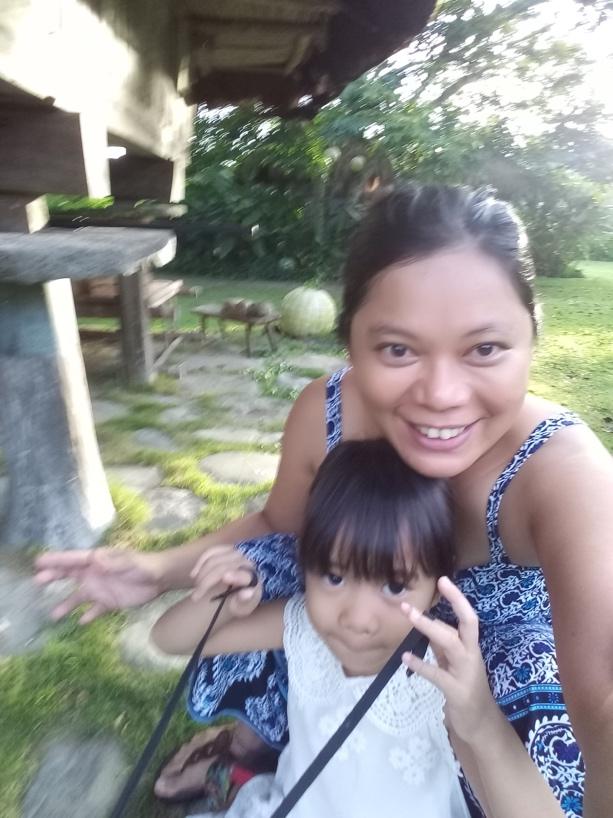 Residence of history: I was born and raised in Ilocos Sur, and went to Manila to study in UP Diliman in 1997. Since then, I never left the campus, staying in dorms and rentals even after I graduated and took my master’s degree. When I became pregnant with my daughter, our family moved to Makati, and when we needed more space, we relocated back in Quezon City.

Reason for moving: I was coming home from a workshop I’d conducted near ABS-CBN. It was raining on a Friday before a holiday payday. I couldn’t get a cab or a free seat in jeepneys. My daughter was only a year old then, and in my desperation to go home, I started walking, hoping I could catch transportation along the way. But I only got inside a jeepney in Quezon City Circle, and even then, the vehicles weren’t moving. So I got off and ended up walking all the way to our house in Visayas Avenue, Quezon City. It was then I told my partner that we should move out of Manila.

We chose Laguna because my partner wanted to live somewhere near Manila. Because I’m a licensed teacher, I felt I could find a job anywhere. I also liked Laguna because I had fond memories of it—it was there I finished a part of my master’s thesis, and my older brother has been living in Los Baños since 2008. Knowing he was there was a huge plus because I knew I could count on him if we needed help. 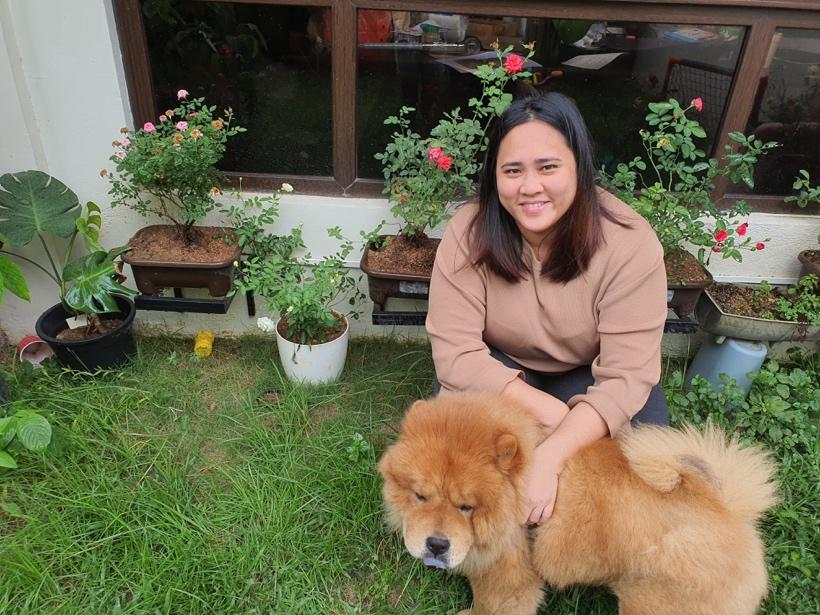 Residence history: I have always been a Manila girl until I got married and moved to the borderline of Cainta and Antipolo in Rizal.

Reason for moving: My in-laws bought this house in the 1980s, and since it wasn’t being used, they suggested that we renovate it and live in it. My husband and I agreed because we didn’t have to pay rent. It didn’t occur to us that we would be far from everyone; we just wanted to have our own space without incurring so much cost. 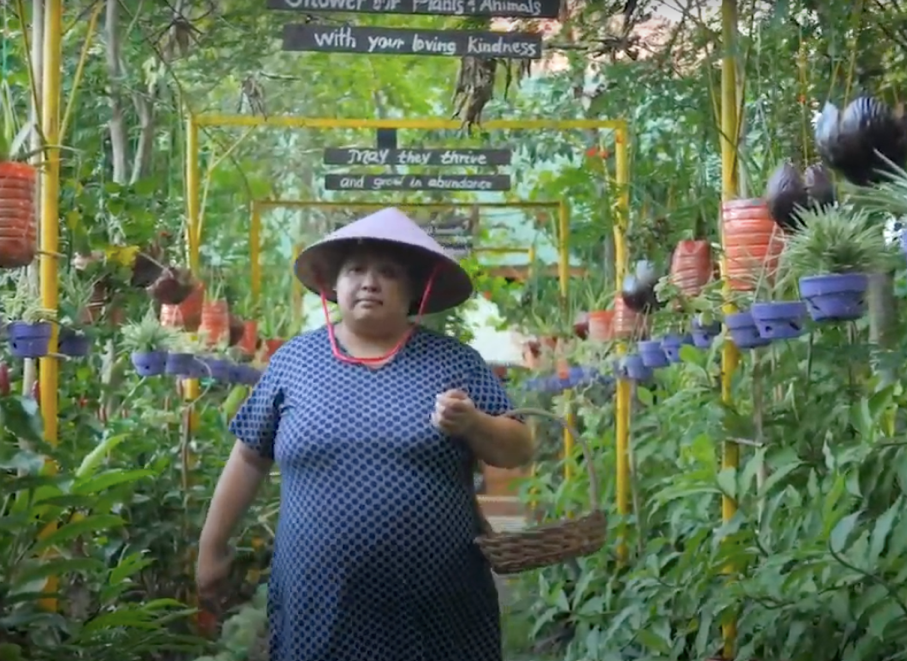 Layla about to harvest vegetables in the farm

What are pros of probinsya living?

Layla: I sometimes miss not having everything at the drop of a hat or being far away from my friends, but waking up to bird song or seeing the night sky peppered with stars, feeling closer to the earth and things that grow are things that I cherish and am very grateful for. Anywhere you live, there will be challenges, but I feel like my soul is calmer here. My sister and I would often joke that we’re having an eternal summer vacation. We used to just spend short vacations here; now, we live here and we love it no less, maybe even more.

Liwliwa: We enjoy each other as a family. Before the pandemic, we’d often hang out at IRRI (International Rice Research Institute) and UPLB (University of the Philippines Los Baños). The air is fresher, and we get to see fireflies. We like exploring other parts of Laguna; we’ve gone camping in Cavinti and Caliraya. Our diet has become healthier because we directly source from local farmers. I think it’s more peaceful and safer here, and the rent is much cheaper. Right now, we live in a 4-bedroom house with two bathrooms and a backyard—and the rent is a fraction of what we’d pay in Manila with the same facilities.

Aya: It’s less dusty here. In Manila, it would take only two days to get a thick film of dust in your room. Back when we didn’t have neighbors, we could see the mountain, which looked dramatic during sunrise. Even when it’s summer, we don’t feel the heat. Over the years, the area has gotten more developed, with more small hospitals and community malls with groceries, so it’s now convenient to live here. 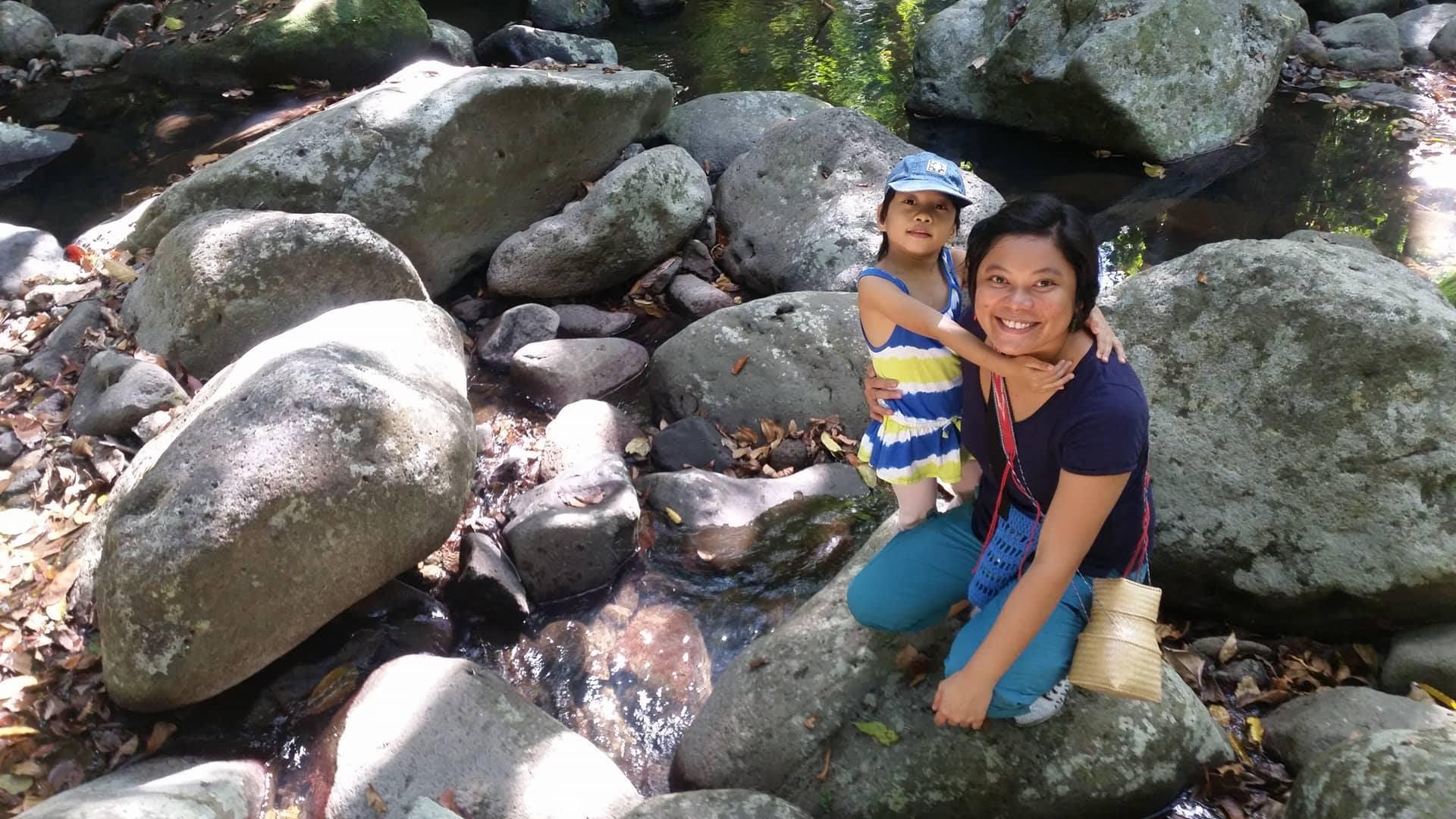 Liwliwa and her daughter at the Makiling Botanic Gardens

What are the cons of probinsya living?

Layla: What we really found challenging to adjust to at first was the early time shops would close. In Manila, restaurants, bars and stores would be open late at night. Here, only 7-11 and the evening pop-up carinderias would be open beyond 8 p.m. During the pandemic, closing times became even earlier, and a lot of the small shops and eateries closed down for good. We didn’t use to have delivery services for the various cafes and restaurants that started popping up early last year, but now we do. We often had power outages and I never thought I’d consider owning a generator but here we are.

Liwliwa: To get to Los Baños, which is where all the action is, you take a jeepney that has to be full before it leaves the terminal. So even if we’re near Los Baños, travel time takes about an hour. Public transportation is a real challenge, especially when I get home late from the occasional gig in Manila. When that happens, I’d call my brother, who’d fetch me with his motorcycle. Eventually, my partner and I were able to buy a car, which allowed us to move around during lockdown.

Aya: I had to get used to the silence. As early as 4 a.m. in Manila, I’d hear jeepneys warming up their engines. Noise was a constant companion, even at night. Here, I only hear birds and the tuko. I found it weird at first.

In my area, traffic is a perennial issue because there’s only one road to take if you want to go to the city—and that’s the Marcos Highway. The problem is compounded when there’s roadwork along the highway. If we’re traveling out of the country, we have to book a hotel near the airport because there’s no way we can leave at a decent hour and arrive in time for our flight.

Mostly retirees live in our huge village, so one time, when my daughter was looking for playmates, we had to walk several streets before we found kids her age. 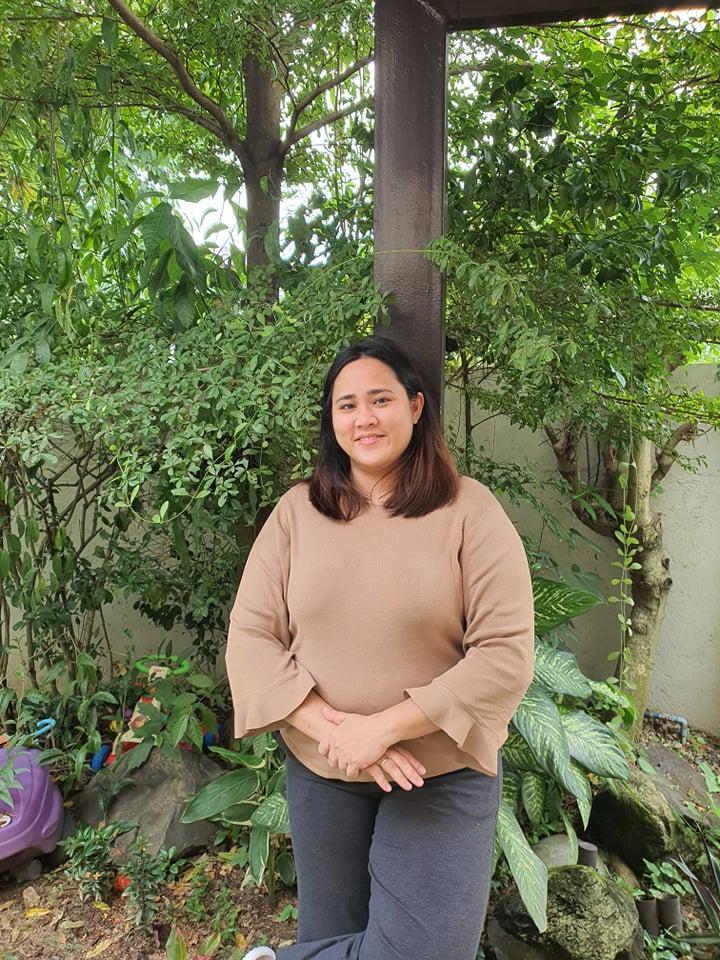 Aya in her backyard with a flourishing malunggay plant behind her.

Are you happy with your decision to move?

Aya: We’re happy living here. If someone asked me advice about moving out of Manila, I’d tell them to always look for the nearest hospital, drugstore and grocery store. Since they would be living away from family, they need to know where to get their essential goods and services. Here, we learned to be self-reliant, especially when there’s flood. Our shelves have to be well- stocked all the time. Still, it’s more refreshing to live outside the city.

Liwliwa: When we made the decision to live in Laguna, I was ready for countryside living. I think  we always idealize the province as a good place to bring up our families, but what matters more than the place is the people you’re be living with. I think our family will thrive wherever we end up because we get along with each other.

Layla: Living the probinsya life really drove home for me how we take many things in our life for granted. Whether you’re living in the city with the many conveniences that are easily accessible or here in the laid-back province, you don’t know what you have until it’s gone. We always feel like we’re missing something; we want what we don’t have, so much so that we forget what we do have at this moment. I am thankful I have the luxury of looking out my window and saying hello to a beautiful bird, or eating sweet, seedless papaya from our backyard tree in the same way I am thankful now for the many years I spent in the city, and eventually (when things are better) being able to go back there for a quick visit to see friends and the places I missed. Probinsya life really teaches you to slow down, take in as much of the view as you can, enjoy the little things every day, and be thankful for each one.

What It Really Means to be a Ninong or Ninang

Beyond the Pandemic: A Closer Look at Wuhan