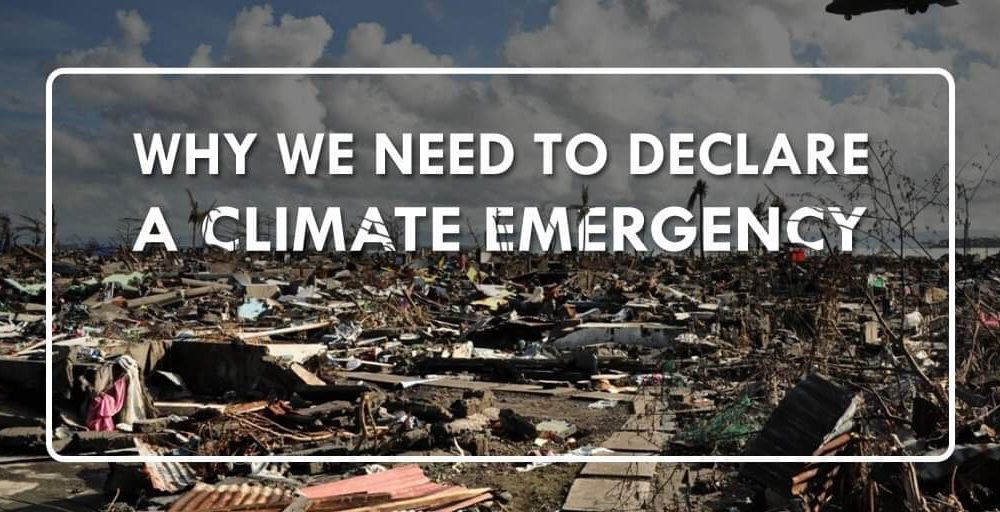 In 2019, “climate emergency” was chosen as the Word of the Year by the Oxford Dictionaries, which defined it as a “a situation in which urgent action is required to reduce or halt climate change and avoid potentially irreversible environmental damage resulting from it.”

Since the United Kingdom’s climate emergency declaration in 2016, more than a thousand local governments in 28 countries have made their declarations, pushing for more urgent measures to address global warming.

In the beginning of 2019, then 16-year-old Greta Thunberg, a Swedish environmental activist, urged global leaders who attended the World Economic Forum to act on climate issues. Her now infamous words, “Our house is on fire,” sparked youth-led environmental rallies all over the globe. On September 20, 2019, around 4 million people worldwide took the streets to participate in Global Climate Strike, the biggest climate protest in history. 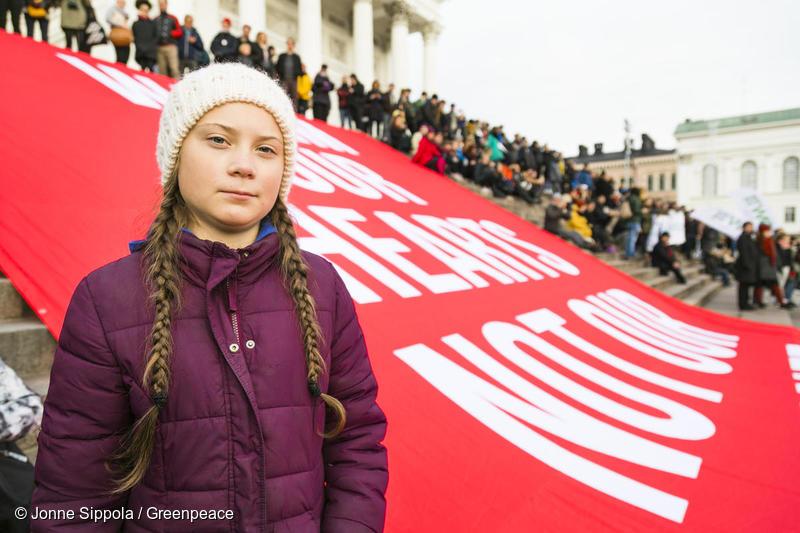 Greta in 2018, participating in a Helsinki rally

Why Climate Emergency Became a Buzzword

2019, which marked the last year of the hottest decade on record, saw a wave of climate emergency declarations across the globe. It was also the year when the Intergovernmental Panel on Climate Change (IPCC) released its first comprehensive report on how agriculture and other forms of land use worsen climate change, and vice versa. With rising temperatures come extreme weather events, droughts, forest fires and pest outbreaks that threaten global food supply.

The United Nations Office for Disaster Risk Reduction (UNDRR) supplemented these findings with a report published on the International Day for Disaster Risk Reduction last October 13. The UNDRR report on the human cost of disasters from the past 20 years (2000-2019) showed a staggering 45% increase in major recorded disaster events, compared to data gathered between 1980 and 1999. In the past two decades, over 7,000 disasters claimed more than a million lives, resulting in global economic losses of US$2.97 trillion.

Majority of the disasters are climate-related, particularly floods—which have doubled in the last twenty years— and storms, which increased by almost 40 percent. Major increases were also observed in droughts, wildfires and extreme temperature events.

With these planet-threatening climate impacts, climate emergency declarations seek to compel all sectors of society, including the government, businesses and the media, to recognize the need to take immediate action. 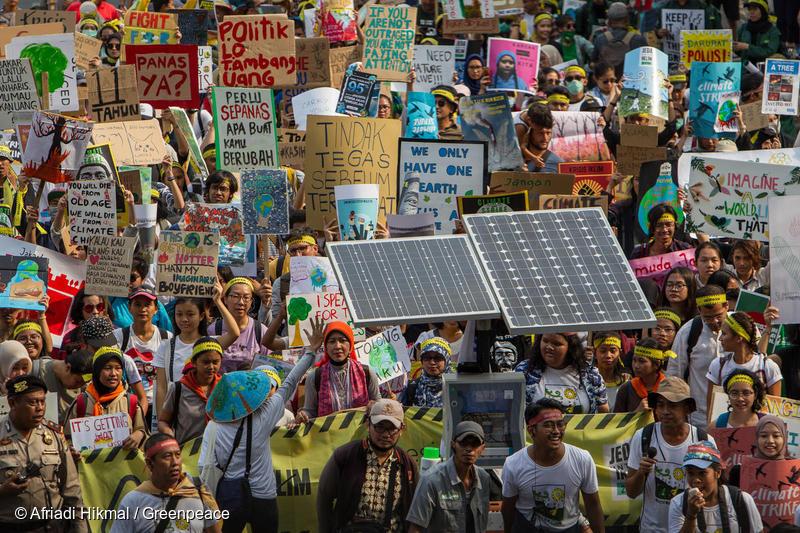 Declaring a Climate Emergency in the Philippines

The Philippines has yet to declare a climate emergency, something which environmental group Greenpeace has been pushing for since December last year, when Typhoon Tisoy devasted Northern Samar and Bicol, prompting provinces to issue a state of calamity. The typhoon, which halted Manila’s airport operations for twelve hours, forced hundreds and thousands of people into evacuation centers, and left 17 dead.

Greenpeace activists marched to Malacañang, calling on President Rodrigo Duterte to immediately declare a climate emergency. “Year after year, Filipinos are identified among the most impacted globally by this crisis, an emergency situation made worse by the big polluters—fossil fuel companies who have lied and covered up about how their operations have been driving the climate crisis and who have been raking in trillions in profits at the expense of millions of people who suffer from its impacts,” said Lea Guerrero, Country Director of Greenpeace Philippines.

According to the Germanwatch-published Global Climate Risk Index 2020, the Philippines ranked 2nd in the counties most affected by impacts of weather-related loss events in 2018. But in terms of facing the highest risk of climate change hazards, the country topped the list of the Global Peace Index.  Greenpeace stressed the need for climate impacts to be addressed since the country’s poorest regions and provinces are the most prone to sea level rise, extreme weather events, and landslides. 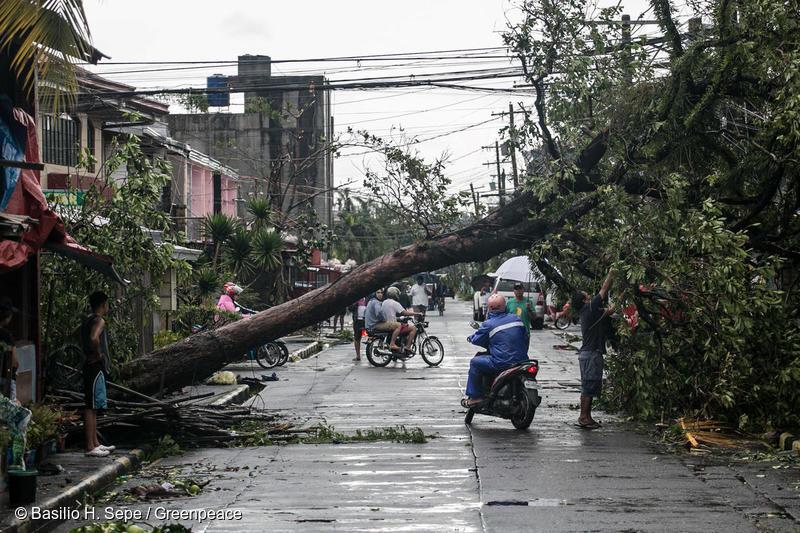 Climate Emergency and the Pandemic

This year, Greenpeace renewed its call for a climate emergency declaration, pushing for climate action and climate disaster risk reduction to be at the heart of the government’s COVID-19 recovery plan. “Unless the worst impacts of the climate crisis are averted, the cost in human lives and economic losses will continue to rise to catastrophic proportions,” said Greenpeace Philippines Climate Justice Campaigner Virginia Benosa-Llorin. “The Duterte administration must use the opportunity of the COVID recovery to build in strong climate action into a response that will enable the country to weather other future crises that may happen alongside the climate emergency.”

A way to do this is to maximize renewable energy (RE) sources, also strengthening the country’s commitment to the the Paris Agreement on Climate Change, which aims to keep global temperatures below 1.5 degrees. According to Greenpeace’s Southeast Asia Power Sector Scorecard, the Philippines was an early leader of RE after the introduction of the 2008 RE Act. But through the years, this commitment died down, causing coal to make up more than half of the country’s energy mix. Because of this, the country has grown dependent on imported fossil fuels, which have tripled in less than a decade.

But the report states that isn’t too late to make a turnaround. If the country transitions to RE, increasing it to 50% by 2030, it can still meet its global climate targets while ensuring a better recovery after the pandemic. Allocating the national budget for eco-friendly measures on health, energy, transport, water, food, waste and education, is believed to strengthen the country’s resilience and sustainability.

Greenpeace demands the following concrete steps from the government:

Last October, Department of Energy Secretary Roy Cimatu, who also heads the Cabinet Cluster on Climate Change Adaptation, Mitigation and Disaster Risk Reduction, released a statement in favor of the country’s declaration of a climate emergency. “The Philippines has already suffered billions of losses, damages and disruptions due to the impacts of hydrometeorological hazards, so there’s an urgent need to address more projected adverse impacts to ensure climate justice for the current and future generations of Filipinos,” Cimatu said.

In the meantime, Greenpeace and other environmental groups continue to monitor the government’s decisions and actions to make sure that their words are concretized by effective action.

How Climate Change Can Fuel a Pandemic

PEACE SUMMIT IN THE TIME OF THE CORONAVIRUS