Home > Blog > Pinoys off the Map 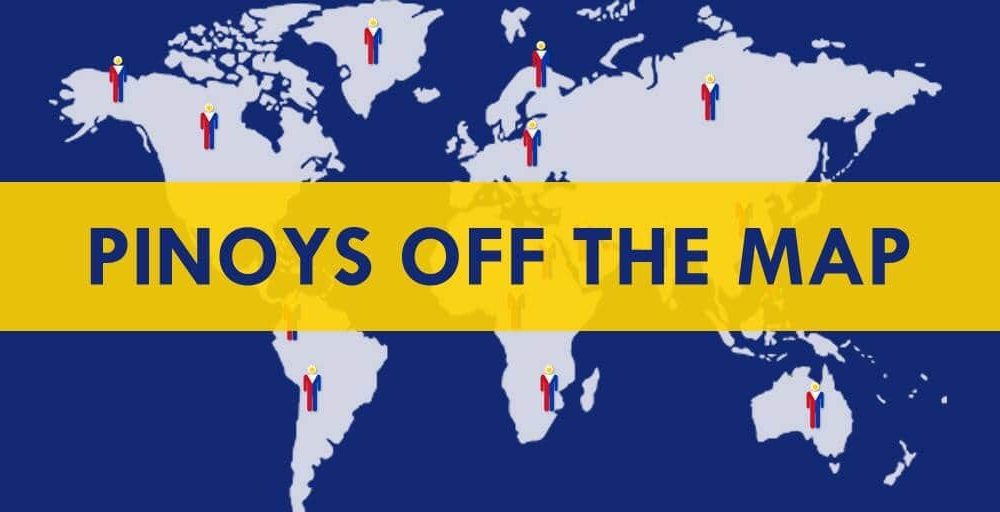 In terms of area, Alaska is the largest state of the United States of America. Located in the country’s extreme northwest, Alaska’s capital city is Juneau, known for its rich wildlife. Hundreds of bird species, and black and grizzly bears occupy its forests; while its waters are home to humpback whales and orcas, as well as wild trout, halibut and salmon, making Juneau a famous fishing destination. In summer time, between May and September, thousands of cruise-ship passengers make a stop in this picturesque city. Here, we find Chris Mariano, who’s been living in Juneau for three years. She shares with us stories about her new home. 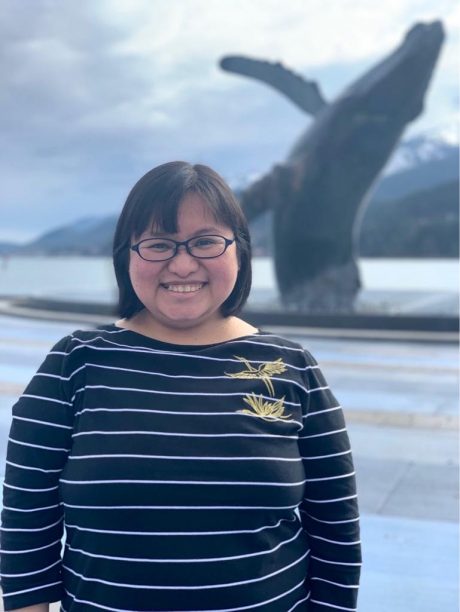 Chris Mariano, a Juneau resident since 2017

The first thing I noticed when the plane touched down at the Juneau International Airport was how bright it was. It was already 9:30 p.m., but the sun was still in the sky, blurred and subdued right as it was about to set. It was the last day of May in 2017, and the first day of the rest of my life. At that moment, it hit me that I was in a radically different country.

Right outside the boarding gates, the huge glass window showed the parking lot with a breathtaking background of towering snow-tinged mountains. The view was pretty as a postcard, except that it was big and real. I had to pause and breathe, Wow.

My family had been living in Juneau for 15 years, and they’d told me what life in Juneau was like. I thought I knew what to expect, but it turned out that everything was still going to be a big adjustment for me. Still, after more than a decade, I had my family with me—and with them, I felt that I could face anything. 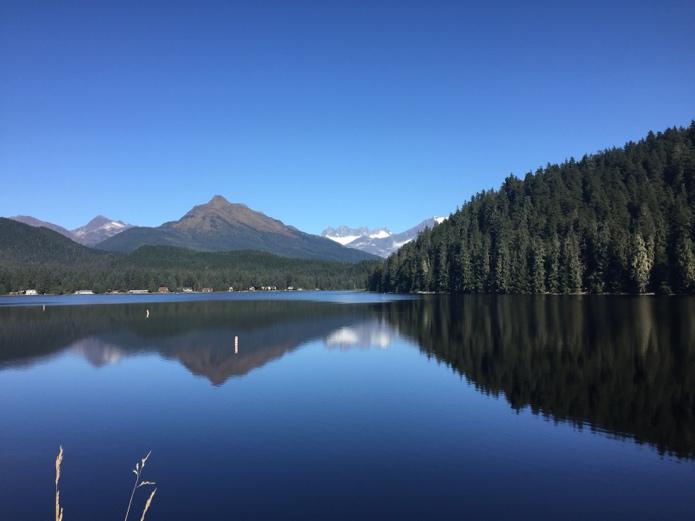 If I had been a minor at the time my family’s immigration application was approved, I could’ve gone with them to the U.S. But by then, I was already 26, and no longer considered a dependent. They called this “aging out,” when the children turned 21 before their green cards were processed. My parents and three sisters flew to Alaska to make their home there. I had to wait before a separate petition could be filed for me. It would take years.

At first, being left behind wasn’t too hard for me because I lived in a compound with relatives, so I still enjoyed a sense of family. I worked in advertising, which was both exciting and hectic, and I felt like I was moving up in the world. But when the holidays came, my relatives would go to their in-laws, and I’d make my own plans. I spent one Christmas with friends, volunteering for the Make-a-Wish Foundation. After we had spent the day with a young girl and her family at a theme park , my friends had to go to a family reunion. Although they invited me—maybe out of politeness, maybe pity—I went home alone.

But as I got older, I realized that I couldn’t be a part of my family’s milestones. One of my sisters got married and I wasn’t able to attend her wedding. Another sister graduated high school, then college. Eventually, I would have two nieces and a nephew that I would only see once in a while. I saw my family growing older in 2D through my computer screen. That was when it began to hit me that none of us were getting any younger, and I was missing out on so many things.

In the blink of an eye, 15 years had already passed. So when my petition was finally approved, I was ready to go and join my family. 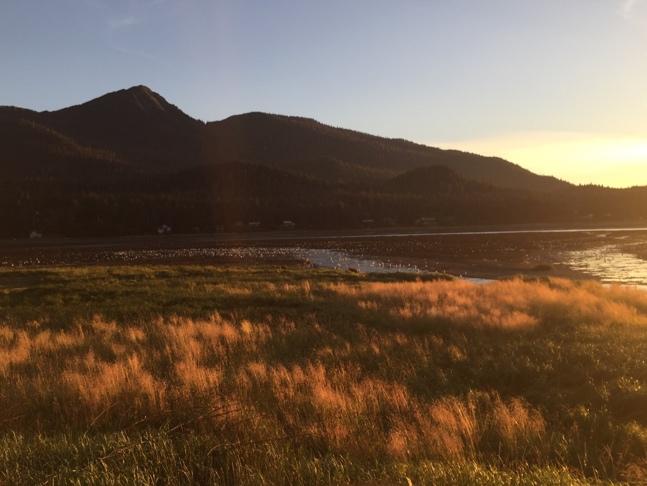 My trip to Alaska to live there was my first time in the States. My first impression of Alaska was really good. I spent my first few weeks going around Juneau and visiting other places in Southeast Alaska. Everyone told me that I was lucky that we were having a good summer then. But since I was still adjusting to the weather, I wore jackets throughout the season.

Juneau is the state capital and has about 36,000 people, but it’s still rural in a lot of ways. We only have strip malls and the roads are narrow. It’s halfway between a small town and a city, and it’s a great place to ease myself into living in a different country. The people are nice, and there’s a huge Filipino community here. There’s a bust of Jose Rizal sitting in a small spot downtown called Manila Square. When I walk the street, I see a lot of Filipinos, and on the bus, some strangers would offer me a seat because I’m Filipino. I would chat with them and discover what a small place Juneau really is, like how this woman I’m talking to turns out to be the aunt of my friend’s husband and so on. Simple things like that have made Juneau a nice place for me to live in. 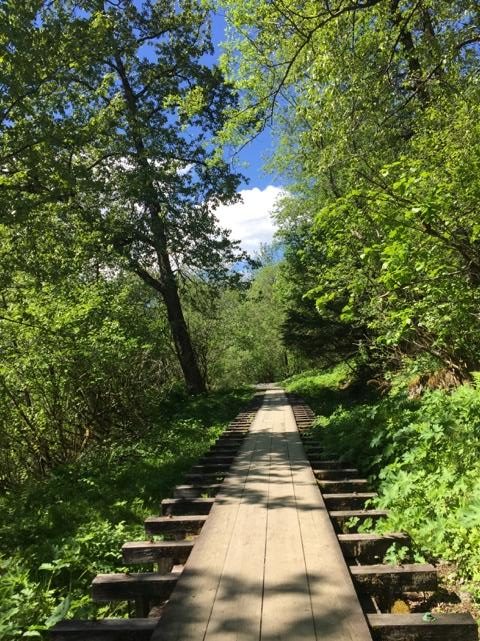 Mountain trail during the summer 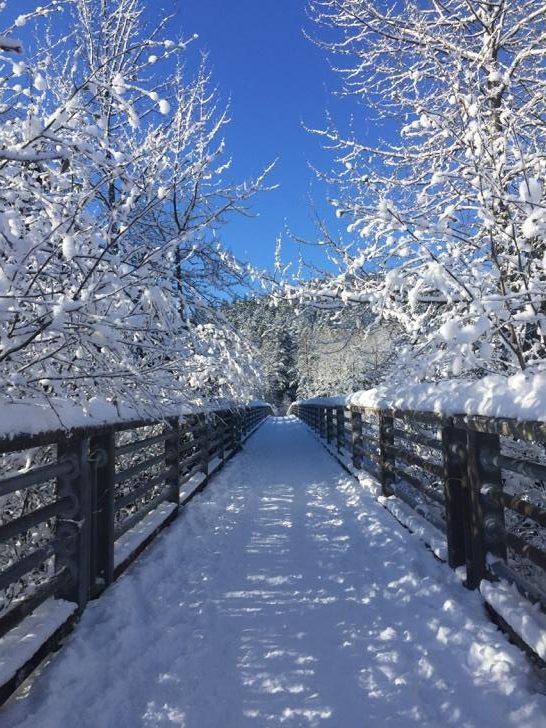 Frozen bridge during the winter

The biggest adjustment I had to make was getting used to northern summers. I know that the extreme north have it worse with their 24 hours of sunlight, but as someone from the Philippines, it bothers me that it never gets completely dark here at night during the summer. When I see sunlight, I automatically think that I have to be active and productive.

One time, I was finishing up my day at 2 a.m. and each time I looked out the window, it would already be light out. They call this civil twilight, that period before sunrise and after sunset when it would still be light outside. Even though the light isn’t particularly bright, I still couldn’t sleep. I’ve always been sensitive to light. I have to use thick curtains and eye masks to be able to sleep. 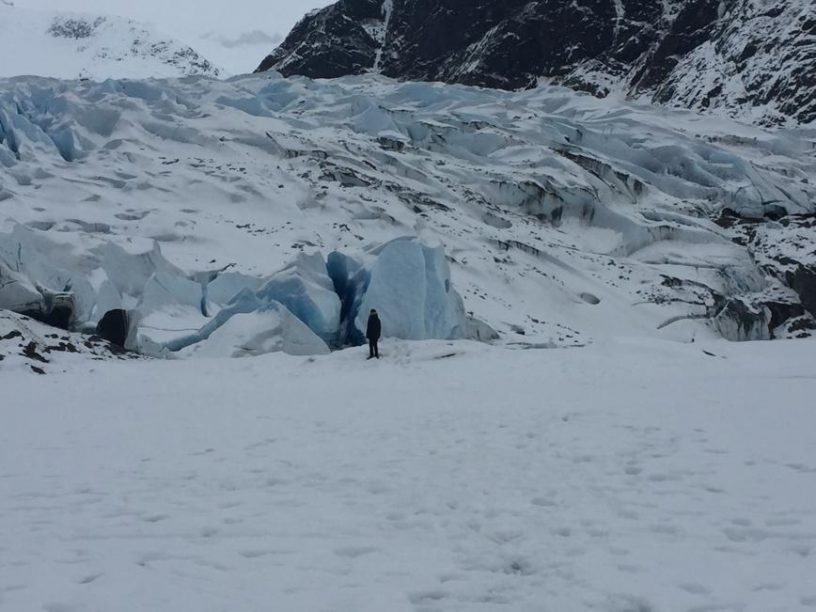 Walking across the frozen Mendenhall Lake

I like the winter better, when the opposite happens—the nights are long and the days are short. There were times that I’d wake up at 8:30 a.m., and it would still feel like dawn, or when I’d end my workdays at 4 p.m. when it would be completely dark.

In terms of weather, June is supposed to be the driest month so that’s the time we go out and travel. It’s very pleasant, and never gets too hot. But for the most part of the year, Alaska has rainy weather—much more rain than I’ve ever had in the Philippines. 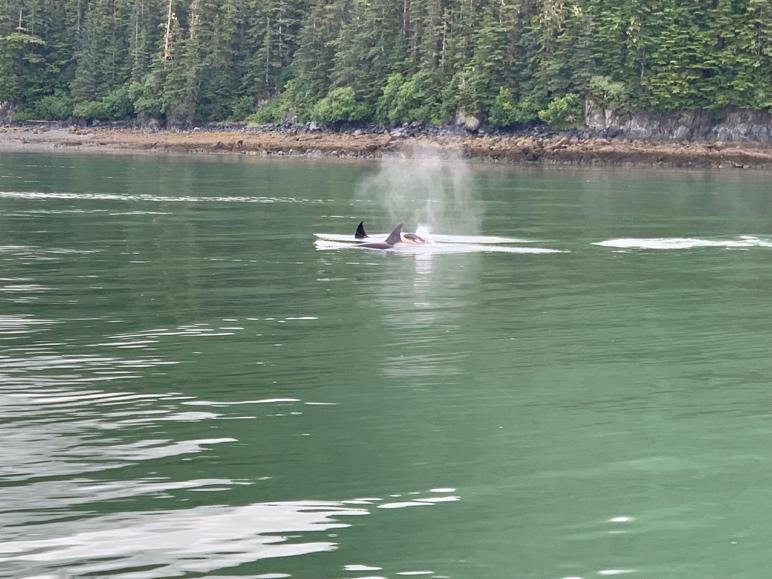 When it’s sunny, Juneau is really beautiful. Sometimes, when I’m riding the bus, I look out the window and just appreciate the place. It’s found in the Tongass National Forest, which is the largest U.S. national forest, and the largest remaining temperate rainforest in the world.

At the end of our street, there’s a gorgeous mountain, which I can see it from my bedroom window. Our home is about 35 minutes from the Mendenhall Glacier on foot, so during pre-pandemic summers, I would take a walk there almost every afternoon. During my work breaks, I would often invite a work colleague to walk around the downtown area. One of my favorite places is a cemetery just a few blocks from our office. It’s built on a hill and is the resting spot for the founders of Juneau. When I have time a little more time during my lunch break, a friend and I can even manage a short hike. On hikes, it’s common etiquette to greet and make eye contact with the people you meet on the trail. It’s a great safety measure too, since they may be the last people you see before you meet an accident or get lost. After the hike, I would return to the office, feeling energized and ready to tackle work.

Black and brown bears are known to make an occasional appearance in Juneau. That’s why everyone is mandated to lock up their food and garbage. Bears that are attracted to your neighborhood because of improperly disposed garbage can become ongoing threats and nuisances, and threats like them would have to be put down. Many Alaskans are used to bears. If one wandered into your neighborhood, you would know better than to approach it; if you saw one on a trail, you would keep your distance and make as much as noise as possible to drive it away. 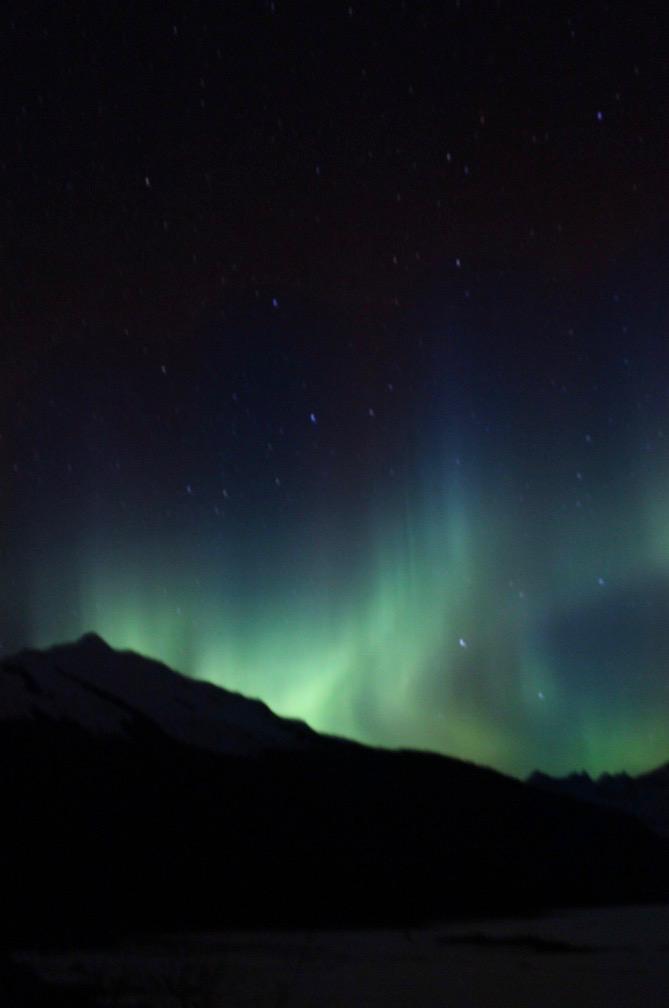 Alaska is famous for the northern lights, and we would see this even as far south as Juneau. They feel otherworldly, these bright dancing lights that come in waves and streams. Sometimes you get different colors, like whites and green and purples. I’ve been lucky enough to see them from my bedroom window, and a few times, I’ve seen come and go for about an hour.

What I really like about my job as an employee of the state’s Department of Education is that I get to travel in different parts of Alaska. But the pandemic put a stop to this, and I now work from home.

Currently, we have less than 20 active cases in Juneau. Although we’re not mandated to wear masks, we’re strongly encouraged to do so. When you take a stroll downtown, you’ll see half of the people wearing masks, although there are not a lot of people strolling downtown to begin with. Some restaurants are open for dine-in, but others have removed some tables to allow for more social distancing. At home, my family takes a lot of precautions. We always mask up and keep our masks by the door. We sanitize our groceries and wipe surfaces. We even sanitize our mail. 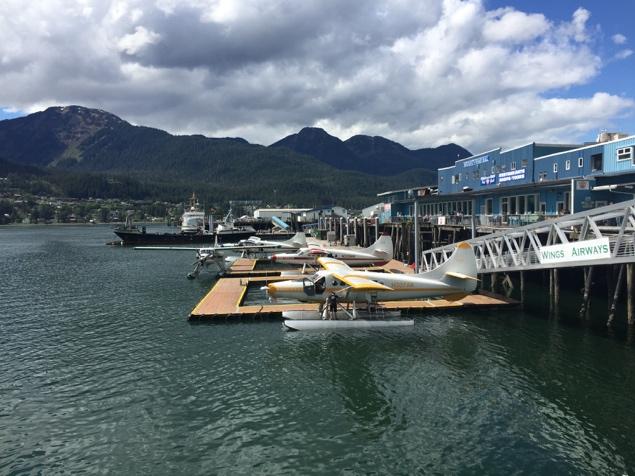 One can board a sea plane to explore other parts of southeast Alaska.

I suppose it helps that living in Juneau means embracing the outdoors. There are not a lot of cramped buildings where people would have difficulties keeping their distance. It also helps that it is relatively isolated. Among the U.S. capitals, Juneau is the only one that doesn’t have roads connecting it to the rest of the state; it’s been socially distancing even before social distancing was a thing.

In a way, this isolation is both a pro and a con: harder to get in, but equally harder to get out. Going places is one of the things I miss the most about the Philippines. There, I could easily go from Manila to Antipolo when I felt like it. Or when I’m in Aklan, where my parents are from, I could take a van and a boat ride just to meet up with friends in Boracay. I actually miss Manila traffic because that’s when I get to think. Before the pandemic, I’d take the long bus route home so I could stay on the road longer, but now I rarely leave the house. With my current work-from-home situation, I have no bus rides but I still have plenty of time to think. It makes me feel a little helpless to be here and away from my friends and relatives back home, because they seem so much further now more than ever.

But each day, it is enough to look out the window to where the mountains tuck us in, keeping us in place. It is enough to look across the dinner table to the people that keep me rooted. Here, they have a saying that goes, “You get to Juneau—by air, by sea, or by birth.” I got here by air, but I’m with my family now, and I have the rest of my life to look forward to.

Pinoys off the Map: Toulouse, France

Pinoys off the Map: Kingston, Jamaica

Pinoys off the Map: Tsukuba, Japan