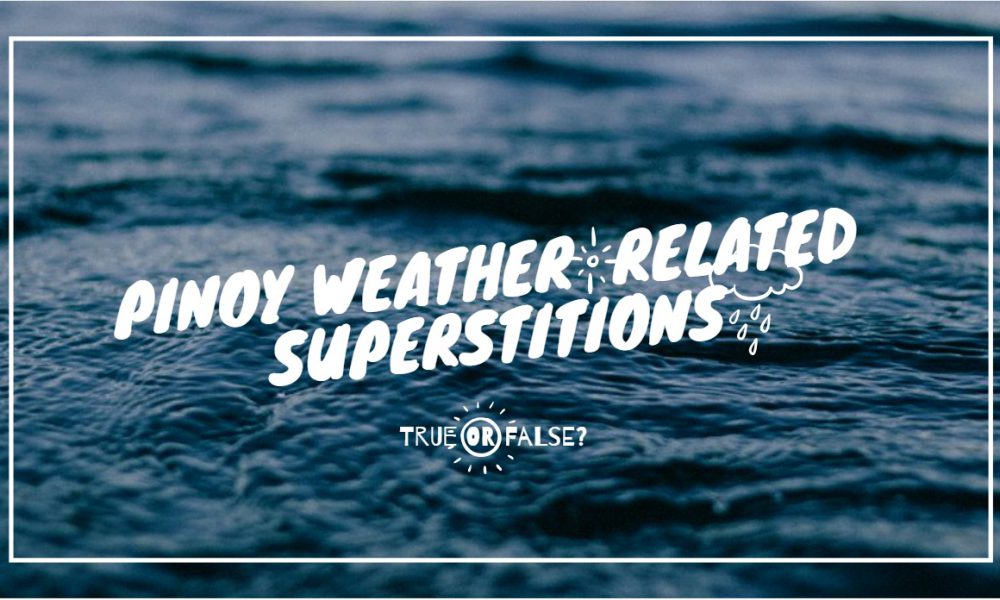 2019 has just begun, but the superstitions from our ancestors still thrive in our culture. Even an everyday thing such as the weather isn’t immune to such baseless beliefs. To help us debunk some weather-related superstitions, we consult experts from no less than PAGASA.

This is a usual saying we hear before heading out during the rainy season. Maybe this is rooted in the fact that red is a strong color and attracts whoever sees it—even lightning.

Regardless of your shirt’s or umbrella’s color, we have to be extra careful whenever we go outside during a thunderstorm. https://panahon.tv/beta/v2/web/blog/2015/06/squat-if-you-must-how-to-keep-yourself-safe-during-thunderstorms/

The earthy scent produced when rain falls on dry soil is called petrichor. Such odor may smell unpleasant to some people.

Petrichor is not known to cause any bodily harm – chemical, biochemical or otherwise. So have no fear of getting those tummy aches when inhaling that scent because it’s a bluff!

Nope, this one doesn’t need a scientific explanation. A person’s singing voice doesn’t have anything to do with the weather. This superstition may have been coined to discourage people who can’t sing to belt out tunes.

This myth, involving a tikbalang (a half human, half horse creature from Philippine folklore) is probably the most popular weather-related superstition.  Across the globe, it is generally believed that such weird weather indicates the wedding day or birthday of a trickster figure (e.g. witch, monkey, fox, etc.). That is why on these characters’ special day, the weather pulls its own prank on us, humans.

This scenario usually happens during the Hot and Dry, and Monsoon seasons. Isolated thunderstorms, which brings rain showers, can occur anytime during a hot, sunny day. Winds associated with a thunderstorm can blow raindrops into an area with no clouds, resulting in a sunshower.

Now that the expert have given their two cents, you can now face the day with your head held high, knowing that what you wear or how you sing won’t affect the weather. But remember, whatever the weather, it’s best to prepare for it to ensure your safety.

How to take IG-worthy Photos