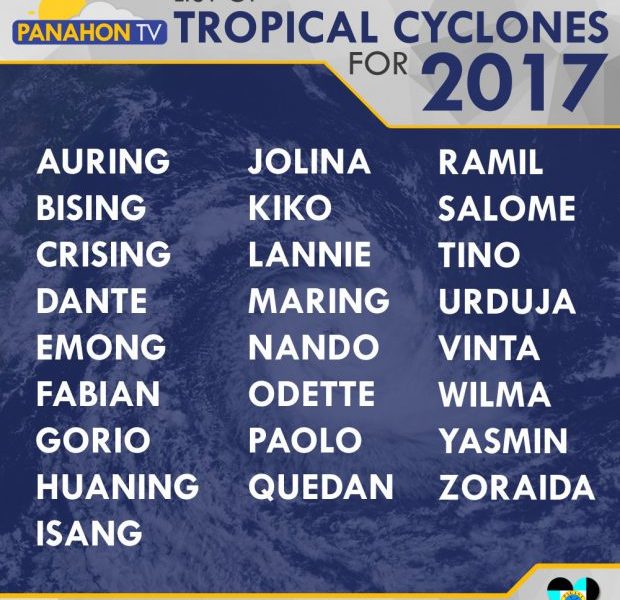 From weather and the environment, to disaster preparedness and climate change, 2017 has been a year of changes and adaptation. As we welcome the New Year, let’s look back at past issues which have helped shape the future.

PAGASA began using impact-based weather forecasting this year, wherein apart from forecasting weather conditions, effects of weather disturbances are also explained. This emphasizes the effects of a hazard rather than merely identifying it. Impact-based forecasting and warning services focus on translating meteorological and hydrological hazards into specific impacts, and the development of responses to mitigate such impacts. ​This year, 22 tropical cyclones visited the Philippines with the last two as the most devastating.

On December 13, the Low Pressure Area in Surigao del Sur intensified into a Tropical Depression and was named Urduja. Three days later, it made landfall in Eastern Samar, and continued to traverse Masbate, Sibuyan and Cuyo Islands and Taytay, Palawan. According to the National Disaster Risk Reduction and Management Council (NDRRMC), 1.8 million individuals were displaced by “Urduja,” while 47 perished. Right after “Urduja” exited the Philippine Area of Responsibility (PAR), Tropical Depression Vinta took over. Heavy rains from the storm inundated parts of Visayas and Mindanao where flash floods and landslides occurred. On December 22 and 23, the storm hit Cateel, Davao Oriental and Balabac, Palawan respectively. 720,000 were displaced, while 163 were reported dead.

In the last quarter of the year, PAGASA warned Filipinos to prepare for a developing La Niña, a weather phenomenon characterized by above-normal rainfall, colder temperatures and stronger winds from the east. According to the Climate Information Monitoring and Prediction Section of the weather bureau, the La Niña is not expected to last beyond March 2018 but the public is still alerted against possible effects.

Abroad, Hurricane Harvey swept through Texas in August where it killed 82 people and dumped 51 inches of rain, the greatest amount ever recorded from a single storm in the continental United States. In September, Hurricane Irma left a trail of destruction, taking 69 lives and displacing 1.2 million people in the Caribbean. Hurricane Maria struck in Dominca and Puerto Rico lastmonth, causing more than 1,000 deaths. Heavy rains also crippled Bangladesh, China, Hong Kong, India and Nepal this year.

Efforts to protect the environment continued in 2017. In February, the former Department of Environment and Natural Resources (DENR) Secretary Gina Lopez announced the cancellation of 75 contracts of mining firms that according to her “kills the watershed and kills our lives.” Three months later, Lopez’s confirmation of office was rejected by the Commission on Appointments. It was followed by a series of protests, which involved blocking the DENR head office gates in Quezon City, as the group disputed the alleged control of business interests in the government.

While Lopez was dethroned, another woman with a heart for the environment was crowned. In November, our very own Karen Ibasco was named Miss Earth 2017 with her winning answer to the pageant’s question: “Who or what do you think is the biggest enemy of Mother Earth and why?” Her reply was “I believe that the real problem in this world is not climate change; the real problem is us because of our ignorance and apathy. What we have to do is to start changing our ways, to start recalibrating our minds, and redirecting our steps, because together, as a global community, our micro efforts will have a macro effect to help save our home, our planet.”

Earthquakes also remained as the country’s staple disaster. The strongest among these were recorded in Tongkil in Sulu, Surigao del Norte, Batangas, Lanao del Sur, Davao Occidental and Ormoc in Leyte. The April earthquake in Mabini, Batangas recorded an Intensity 7 ground shaking and was felt in Cavite, Oriental Mindoro, Bulacan, Metro Manila, Quezon, Pampanga and Camarines Norte. Six persons were reported injured, and a state of calamity was declared in Mabini, Tingloy and Batangas City.

In November, the Philippine Institute of Volcanology and Seismology (Phivolcs) raised Alert Level 2 in Mt. Kanlaon in Negros Occidental after it showed an intrusion of magma that could lead to the volcano’s eruption. To prepare the country for future earthquakes, Phivolcs held simultaneous drills across the archipelago in every quarter of the year.

While United States President Donald Trump announced the country’s withdrawal from the Paris Agreement, talks about mitigating climate change continued. In June, the leader of the world’s second biggest carbon emitter said that the agreement imposed unfair environment standards in the US.

At the United Nations Climate Change Conference in November, negotiators from almost 200 countries approved a five-year work plan on “loss and damage” to formally address slow-onset impacts of climate change, non-economic losses and migration. Meanwhile, 47 of the world’s poorest countries, committed to generating 100% of their energy from renewable sources as soon as possible. They also pledged to update their nationally determined contributions before 2020 and to prepare long-term strategies.

2017 brought immense challenges on a global scale. But with each trial came the need to change the way we respond to issues on weather, environment, disasters and climate change. As we face another year, we come equipped with the lessons that we learned from the past year.

Dr. RJ Naguit: We Can’t Force People to Be Okay

PAGASA’s Crucial Role during the Pandemic