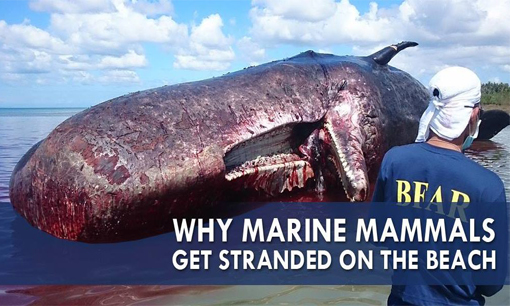 The scene looks straight out of a disaster movie. A 500-kilo false killer whale almost four meters long is washed up on the shore, its sleek and dark gray body mapped with scratches and wounds. It is still alive, but looks weak and disoriented. It seems even less capable to heave itself back into the deep.

The sight of a usually strong and lithe creature suddenly rendered helpless and pulled out from its environment seems like a portent of the world’s end. But the reality is that more and more incidents of marine mammal stranding are reported across the country. In fact, the false killer whale story is true, which took place in a barangay in Dansol, Pangasinan just last May. A month before, a melon-headed whale was discovered stranded along Agoo, La Union shoreline. 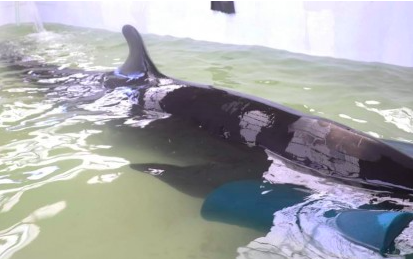 The false killer whale rescued in Pangasinan last May was named “Hope”. (photo courtesy of PMMSN)

“Stranding” or getting stuck on the beach usually happens to marine mammals, which include whales, dolphins, seals, walruses, dugongs, and polar bears among others. According to the National Oceanic and Atmospheric Administration, marine mammals have these distinct characteristics:

Dr. Lemnuel V. Aragones, head of the Marine Mammal Research and Stranding Laboratory (MMRSL) stated that the conventional hypothesis on why marine mammals get stranded is because they want to breathe easier. “When the marine mammal is weak, it’s hard for them to come up for air after being submerged in the sea for a while,” he explained in Filipino during a Panahon TV interview. “When  on the shore, they get to breath air but often times also a challenge if there are strong waves; thus, most stranders only have a slim chance of survival.”

MMRSL is involved in “the data collection, archiving and sometimes detailed examination of stranded marine mammals along the Philippine coast.” By studying the stranding phenomenon, it ultimately seeks to successfully conserve and manage our country’s marine mammals. According to Aragones, the awareness on stranding is relatively new among Filipinos. “The Philippine Marine Mammal Stranding Network Inc. (PMMSN) was established in 2005. Back then, Filipinos still didn’t know what stranded animals meant, so we only received a few stranding reports. But since 2009, when we have already trained quite a few representatives from various coastal regions nationwide, the reports climbed up. From 2014 until now, we record an average of more than 100 stranding reports a year.” 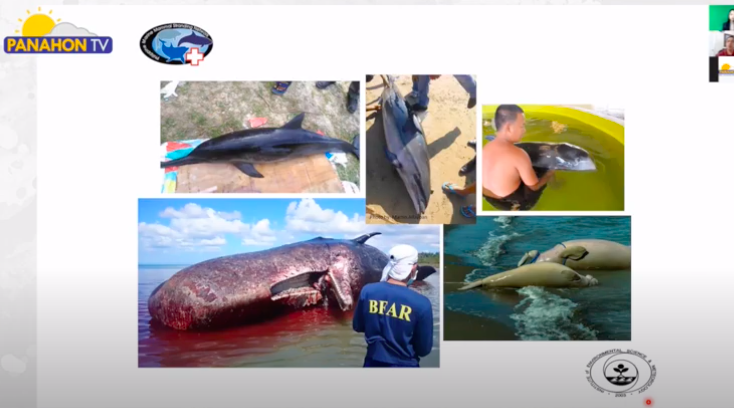 Based on PMMSN’s Stranding Manual, stranding is a complex phenomenon and has many possible causes. These include the following:

“The intermonsoon from March to April, when the amihan is transitioning into habagat, is when most strandings happen,” said Aragones. During this time, fishermen most likely flock to the sea because of the warm weather and calm waters. Unfortunately, they fish in areas also frequented by marine mammals such as dolphins and whales. “Some marine mammals may get entangled in fishing nets. Others find it hard to compete with the fishers for food, so probably they swim nearer and nearer to the shore, where there are unfortunately more threats, which may be attributed to  their stranding.”

For instance, a sudden low-pressure area that brings about localized thunderstorms may also cause marine mammals to be stranded. Aside from net entanglement, injuries from fishing interactions may come from dynamite fishing and illegal fishing gear.

Sometimes, mass stranding— the simultaneous stranding of more than two similar-size marine mammals—may have natural reasons. “Marine mammals have often tight social bond, which, in technical terms is called ‘altruism’. They have selfless concern for each other, so even if only one member is sick, the rest of the group will stay with the ailing mammal. Sometimes, this causes a group to be stranded on the shore,” Aragones explained.

But what should you do if you witness a marine mammal stranding? Aragones gives these tips:

1. Observe. Before doing anything, observe first if the stranded marine mammal is still alive. See if it is weak or injured, or if it has simply lost its way while chasing food. If the animal appears uninjured, leave it be. Often the animal can swim back to the sea once the water level rises. But if the animal looks weak, don’t push it back to the water. That’s because it’s in danger of drowning if it’s too weak to swim. Remember that mammals need to breathe air like us.

2. If the marine mammal is weak, assist and stabilize it. Do this by making sure that the top of its head where its blowhole is located is always above water. This prevents it from aspirating sand or breathing in water, which can enter its lungs and may cause damage and eventual death.

3. Report it to the Philippine Marine Mammal Stranding Network. According to the PMMSN website, you may report a stranding that needs immediate response by calling (47)252-9000 or 0928-5018226. Aragones stated that the PMMSN has trained almost 5,000 respondents across the country. All of them are linked to the LGUs, BFAR regional offices (and other NGAs) so if you witnessed a stranding event, you can also call the mayor’s office, the agricultural office, or the BFAR (Bureau of Fisheries and Aquatic Resources) regional office. These agencies can contact the trained responder in their respective areas. 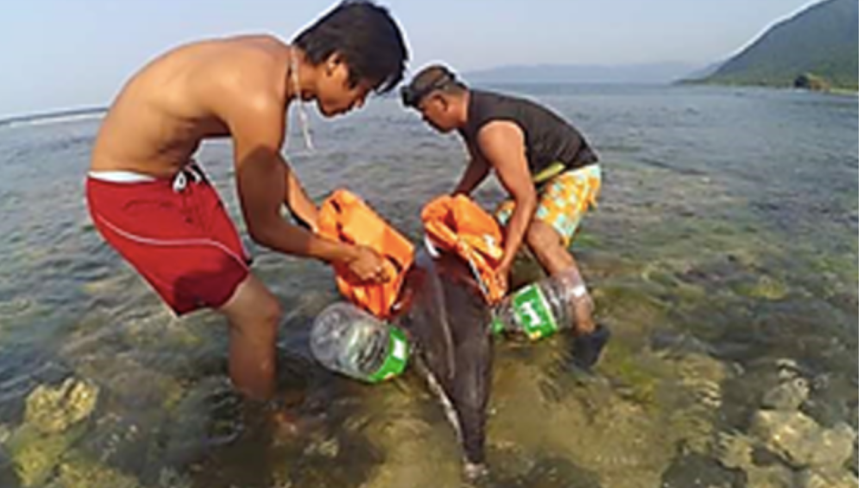 To better understand stranding, Aragones said it’s important to study it in the context of both the physical environment and the animals’ biology. “We are trying to corollate and associate all parameters that we could think of in relation to what is happening to these animals and their environment. We adopted a One Health approach, so I have former students working with me who looked for pathogens, others look for pollutants. There is a veterinarian MS student who looked at the medical aspect of the stranding, and a physics major who studied the physical environment.” Aragones and his team had a study whose publication will come out soon on the characterization of the sounds of dynamite blasting and its potential impacts on whales and dolphins who navigate, and find their prey and partner in the waters using their sense of hearing (biosonar).

The health of our marine animals also reflect the health of our seas, which are hubs for human activity. Many Filipinos live near the water, and depend on it for food. But the seas’ problems are part of a much bigger picture. “Our ecosystems are ailing. Our tropical rain forests are decreasing, our wetlands are totally ignored. The pollution in our rivers end up in the sea, and this affects our coral reefs, seagrass and mangroves. We assume that areas far from the sea are safe from disturbance. Unfortunately, that is not true. What we are seeing right now, based on our data, is that there are so many pathogens, parasites and bacteria that can cause diseases. Just imagine—the toxoplasmosis disease that causes meningitis in the brain is supposedly land-based as the reproduction of this parasite is completed through cats or feline. But we can now see this type of disease in cetacean species found in the deepest parts of our seas and oceans. It’s mind-blowing how widespread water pollution now is,” said Aragones.

Other human-induced pollutants found in our seas also come from our power sources and pharmaceutical products. Aragones stressed that wherever we are, we play a part in either damaging or saving our seas. “Whatever damage the mountains experience goes straight into the oceans. If we want to have a positive impact, we must have the initiative to change our habits. Be responsible. Don’t throw your garbage anywhere. Plastic is not the one at fault, it’s us, humans. I hope we realize that we are a mere part of this huge world of biodiversity, which is our planet’s most unique component.”

Everything we—or don’t do—impacts the oceans, which make up 96.5% of the Earth’s waters. Marine mammal stranding is now part of our impact, and is something we can address if we take better care of our planet.

Dr. Lem Aragones is Professor at and former Director of the Institute of Environmental Science and Meteorology of the College of Science at UP Diliman. He received a PhD in tropical environmental science from James Cook University, Townsville, Australia.

How Can We Solve Air Pollution?

How Environmental Care Protects Us From Disasters