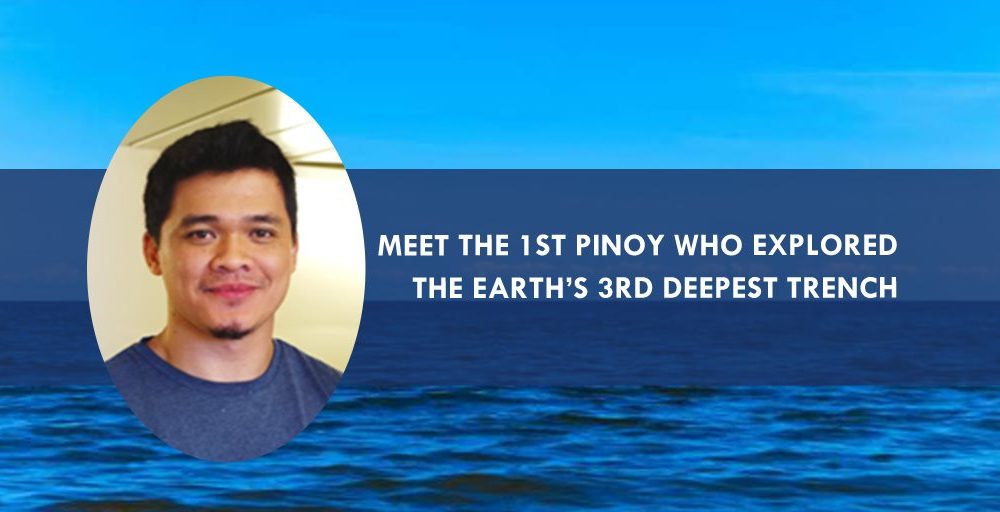 Despite it being the planet’s third deepest trench, not much is written about the Philippine Trench. What we do know is that it includes the Emden Deep, first discovered by a German ship called Emden in 1927. More than two decades later in 1951, a Danish ship named Galathea explored the spot, discovering a type of crustaceans called amphipods, bacteria and other organisms thriving in deep waters.

These bits of information were also what all Dr. Deo Onda knew about the Emden Deep. An Associate Professor and Deputy Director for Research of the Marine Science Institute (MSI) in the University of the Philippines Diliman, Dr. Ona is microbial oceanographer. He studies the ocean’s functions and movement, as well as the marine building blocks—the microorganisms. “My field is a very young field. It just started taking off in the past two decades,” he explained in an interview with Panahon TV. “The study recognizes that the foundation of the aquatic ecosystem are actually microorganisms—planktons, bacteria, and viruses. I’m trying to understand how these very small organisms affect large-scale processes and vice versa.”

The opportunity to further study the ocean, particularly the Emden Deep, came when Caladan Oceanic invited Dr. Onda to an undersea expedition last March. The American company is owned by explorer Victor Vescovo, who sets world records on exploration. In 2019, Vescovo explored the Mariana Trench, the ocean’s deepest spot. 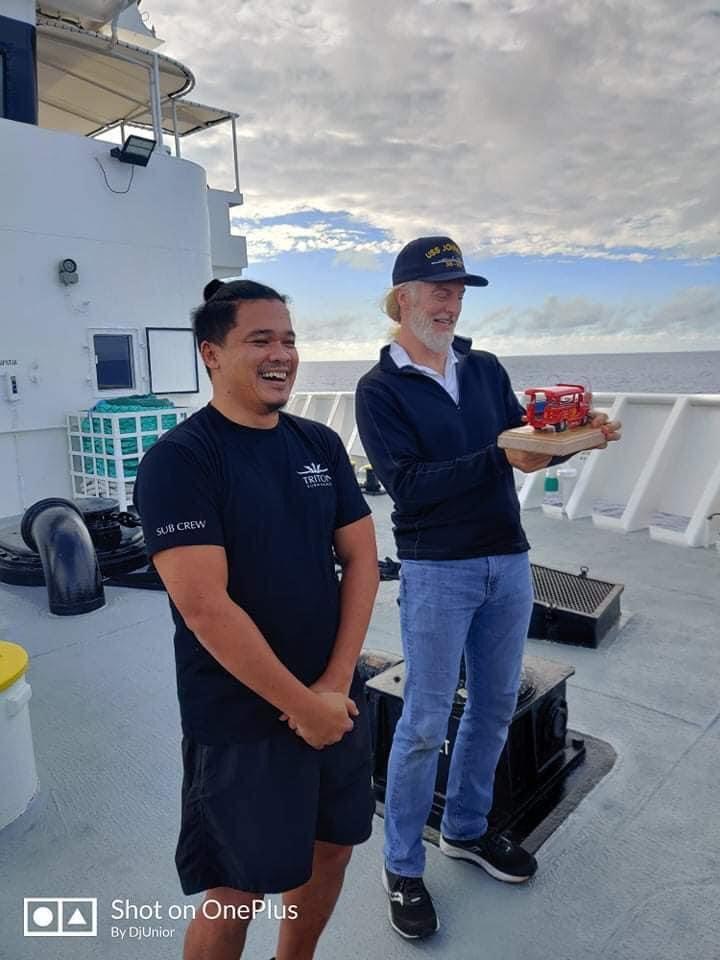 Vescovo marveling at a miniature jeepney from Dr. Onda.

Preparing for the trip

Though Dr. Onda was excited about the expedition, he didn’t think his fellow Filipinos would be interested in it. “Nobody knew I was going to dive into the Emden Deep. I didn’t even tell my mom,” he shared in Filipino. To start the journey, Dr. Onda first flew to Guam in preparation for the dive. “The news about my trip only came out when we left Guam. MSI thought it was newsworthy, so they did a press release. I suppose it was a bit of good news in the midst of the pandemic.”

Before Dr. Onda took on the journey, he spent a year doing paperwork, and preparing himself physically and mentally. “I needed to dehydrate myself a night before. I needed to do fasting because there’s no toilet in the submersible.” But the fact that he was going to see a place where no Filipino has gone before kept him excited. “Most of the things I teach in the university is based on books written by Western scholars. I was very excited because I will be able to share something that I’ve experienced myself—something I’ve seen myself and it’s just in our backyard.” 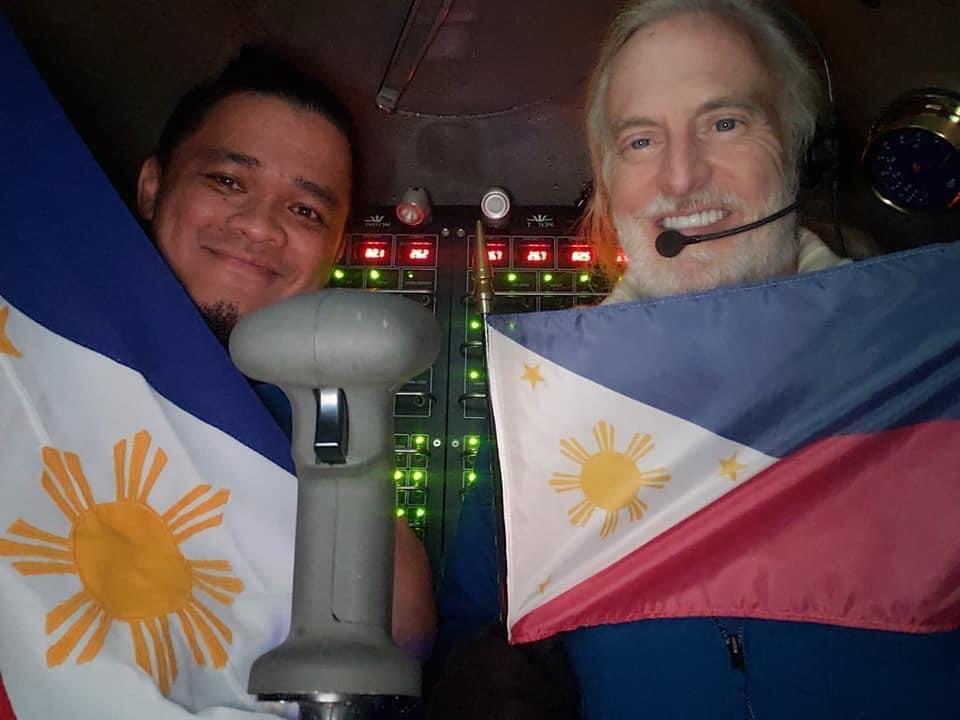 Dr. Onda and Vescovo waving Philippine flags at the bottom of Emden Deep.

The submersible bound for the Emden Deep was only big enough for Vescovo and Dr. Onda. The descent alone took four hours, accompanied by a gradual drop in temperature inside the craft. “It began getting cold at around 5,000 to 6,000 meters. Victor wore a winter jacket and boots. But I was used to the cold because I lived in Canada for a while. It was like being inside a refrigerator.”

Fifty meters before touchdown, Dr. Onda took out the Philippine flag from his pocket. “I was trying to represent 106 million Filipinos down there. I felt the pressure, but it was also a great privilege. As the first Filipino to go there, I knew that it was my responsibility to share what I’ve experienced.”

When the craft finally hit the bottom, Dr. Onda was in awe of being in one of the world’s deepest trenches. “It was a surreal feeling,” he shared.  “It was like watching a Martian movie. Then from afar, I saw something white and floating. I thought it was a jellyfish, but when we got closer, we discovered it was plastic.” This surprise discovery came like a punch to Dr. Onda’s gut. “I was pulled back to reality—seeing that plastic was a reminder that I was still on Earth. I study plastics as a scientist, but I was still hoping not to see it. It was painful seeing that human imprint at the bottom of the Philippine Trench. Human activities are affecting environments, even those in the deepest parts of the ocean.”

The Emden Deep was also quieter than he expected. To see if other creatures would appear, the explorers released a fish near the submersible. What they saw was a deluge of amphipods. “At 10,000 feet, you won’t really see fish. But we did capture a jellyfish on video.”

The craft stayed at the bottom for four hours. Within this time, Dr. Onda and Vescovo confirmed that the Emden Deep is around 10,088 feet—shallower than the previous Dutch expedition in the 1970s whose reported measurement was around 10,500 feet.

With his record-breaking journey, Dr. Onda hoped to remind fellow-Filipinos that they are people of the sea. “More than half of our population live on the coast. We depend on the sea’s bounty. If we want to ensure our survival, we need to take care of the ocean.”

He also stressed the interconnection between humans and the environment. “Our deeds affect even the deepest parts of the ocean. It’s sad to know that there are no longer pristine places on the planet. Plastic has reached even the world’s farthest corners.” Because of this, Dr. Onda urged the big players to address plastic pollution. “It’s not an issue of who uses plastic. It’s not about plastic straws or plastic bags. We need to call the attention of manufacturers. They have a big responsibility in shifting the demand for plastic. The government also has to create policies. To know more about our oceans, we need to value our scientists.”

When Dr. Onda held the Philippine flag at the bottom of Emden Deep, he wanted to raise awareness among Filipinos on their rich marine heritage. “I wanted to tell them that as Filipinos, we don’t need to look up or far. We need to only look down because we own the Emden Deep. I wanted to assert our country’s sovereign rights by waving our flag.”

Dr. Onda is also a big believer of dreams. “Carina Dayondon, the first Filipina to reach the summit of all the 7 highest peaks of the world once said, Ang bansang hindi marunong mangarap, walang nararating. (A country that doesn’t know how to dream won’t get anywhere.) I think expeditions like this are a manifestation of what humans can do if they dream.” He ended, “Sa mga kabataang Pilipino, sana ang kuwentong ito ay maging inspirasyon sa inyo. Kung gusto mo maging doktor, hindi lang doktor ng hospital, mayroon din doktor ng dagat, doctor ng isda, doktor ng lupa, doctor ng gubat. Sana managinip ka rin. Maraming oportunidad para sa kabataang Pilipino.” (To the Filipino youth, I hope this story inspires you. You can be a doctor—not only in a hospital. You can be a doctor of seas. A doctor of fish. A doctor of earth. A doctor of forests. I hope you will dream. There are a lot of opportunities for the Filipino youth.)

The Rise of the Community PanTree

How Can We Solve Air Pollution?

Why Marine Mammals Get Stranded on the Beach