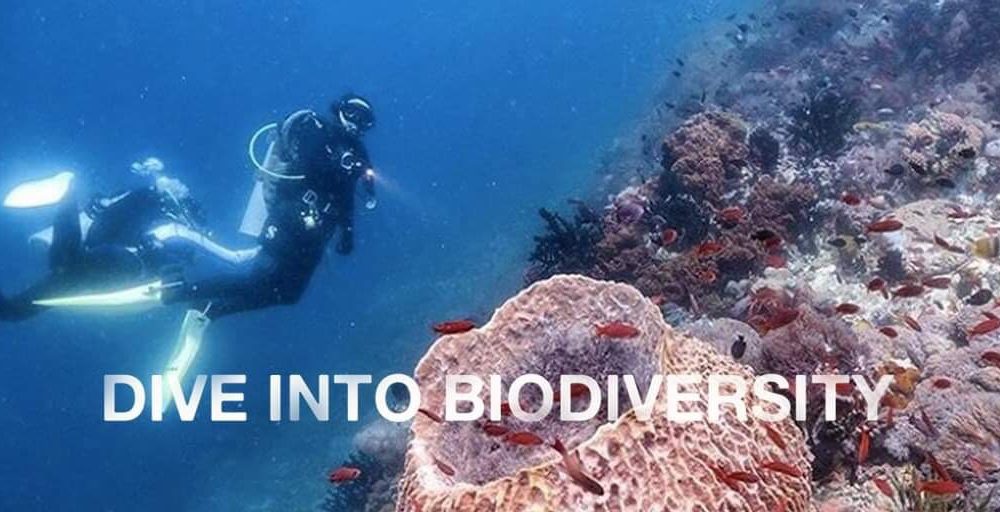 The Philippines is part of the Coral Triangle, which includes portions of Indonesia, Papua New Guinea, Malaysia, the Solomon Islands and Timor-Leste. According to the World Wide Fund for Nature, the Coral Triangle houses more coral reef species than any place on the planet. Coral reefs are the backbone of underwater life, and support a large ecosystem that protect coastal areas from large waves, and provide livelihoods for more millions of people.

But our country is more than just part of this blessed area; in fact, the Philippines is at the heart of it, with waters so bountiful, they could provide food for the whole Asian region. A 2005 study from marine conversation scientists identified the “peak of marine biodiversity in the central Philippine islands”, declaring it as the epicenter of marine biodiversity and evolution.

One of the ways to appreciate our rich underwater life is through scuba diving, a recreational activity that has become a major part of our country’s tourism. This has prompted a presidential decree declaring the second week of January as Best Dives Philippines Week, which promotes scuba diving while focusing on the conservation and protection of our marine resources.

In celebration of this event, Panahon TV interviews passionate Filipino divers who are constantly in awe of our country’s own aquatic allure. 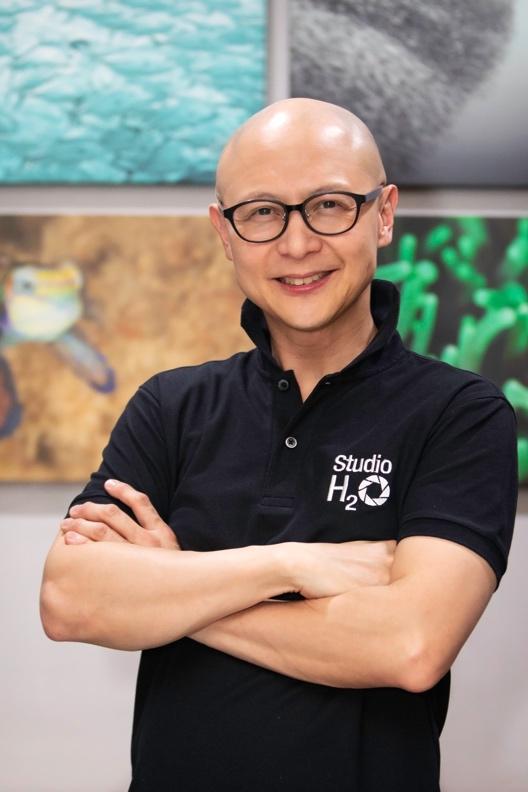 Introduction to diving: I’d always harboured a fear of water, having experienced three near-drowning incidents in my childhood. In 1991, during my late teenage years, I went to Boracay for the first time. It was far from the Boracay we know of today. I snorkeled for the first time, and I remember seeing a breathtaking coral garden that was untouched. This inspired me to try scuba diving with my friends.

I immediately fell in love with diving. My fear of drowning was completely eliminated because I had a tank of air with me the whole time I was in the water. The objective of scuba diving is to sink, with which I had no issues. 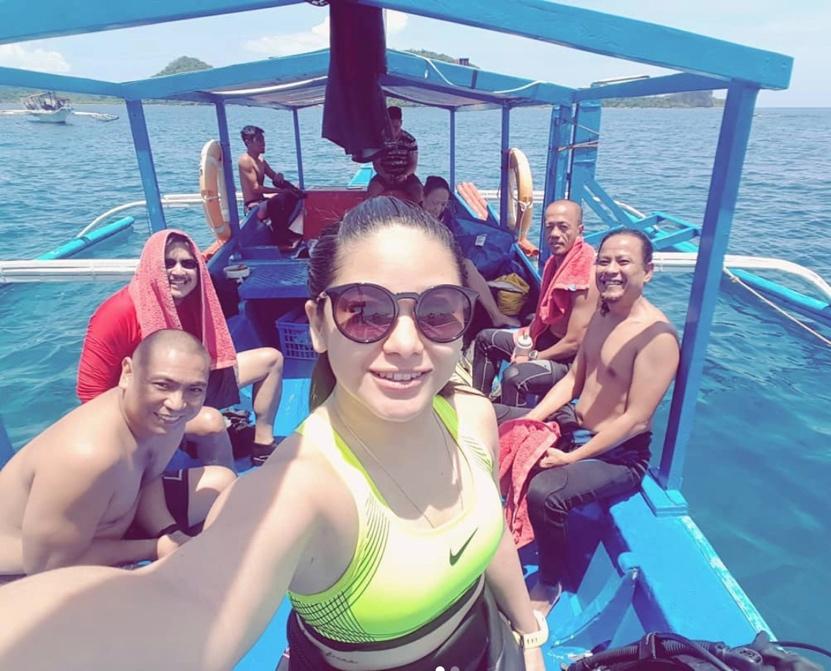 Introduction to diving: I got certified back in 2003 at the age of 17. Initially, my dad encouraged me to continue diving because of my health issues, which could be managed by proper breathing. Through diving, I got to enjoy weekends while cleansing my lungs. As I got older, diving became a way to relieve me from office stress. It gave me the strength to tackle a new work week. 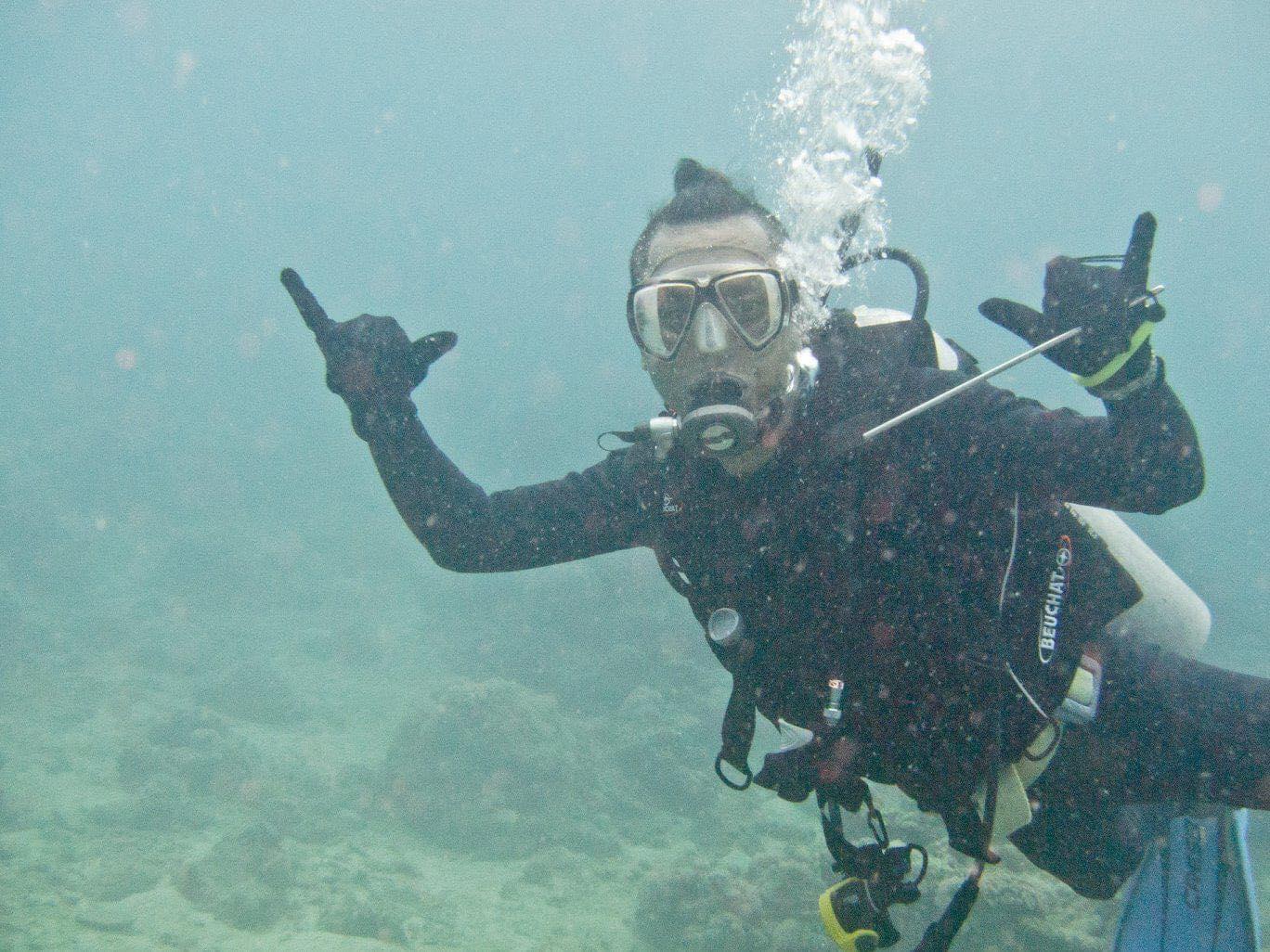 Introduction to diving: I decided to try diving after a team-building session in Quezon. On the boat ride to the resort, we experienced a bit of bad weather, resulting in huge waves and triggering my anxiety attack. Scuba diving allowed me to confront my fear of open water.

I like the silence and tranquility of being underwater. While diving, I find myself playing along an invisible line between panic and happiness. Aside from helping me deal with anxiety issues, diving recharges me and makes me maintain some form of discipline since in diving, safety always comes first. 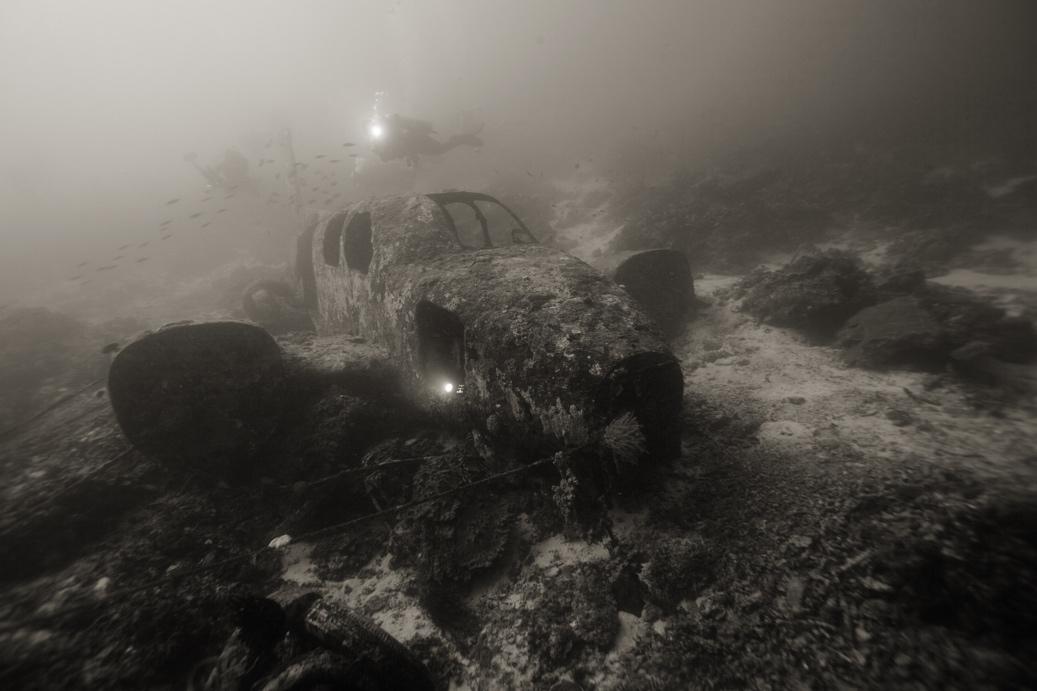 Wowie’s photo of the Tambuli plane wreck in Cebu won him a silver medal at the 1st Asian Underwater Federation Photography Competition in 2011.

For Wowie, diving has evolved from a mere hobby to a lifetime pursuit. “I’m like a first-time diver each time I go out to sea. I’m amazed every single time. The corals are so beautiful; I can’t even begin to describe them. The underwater colors are nowhere near to what you can find on land. That’s why I got into underwater photography—I wanted to show other people proof of how breathtaking our marine life is.”

Aside from being a Professional Association of Diving Instructors (PADI) Divemaster, Wowie is also an award-winning photographer and cinematographer, whose work have been featured on Nat Geo Wild. “You can take me to Europe and show me the stunning architecture, but I’ll still say nothing beats the view beneath the ocean,” he shares. “When you’re diving in other countries, you look up because you will see the great creatures—the whales and manta rays as wide as 20 feet. When you’re diving in the Philippines, you look down to see the breathtaking coral plantation.”

Part of Wowie’s job as an underwater photographer is capturing subjects unseen by the naked eye. “Dive guides who are former fishermen have a keen eye for these creatures. One time, my dive guide pointed to a patch of sand to indicate that I should train my camera on it.” It was only when Wowie pointed his highly-magnified lens on the sand did he see the subject. “I was so surprised! It was a whole colony of skeleton shrimps. They’re so small—like a fifth of a grain of rice. We have thousands of those kinds of species that people from all over the world flock here to see.”

Meanwhile, thresher sharks, which are deep-sea creatures and difficult to spot, abound in Malapascua, Cebu. Gerry considers seeing these elusive animals as his most memorable diving memory. “Seeing thresher sharks up close was surreal. It was my first dive outside Luzon, and I realized then that were so many dive sites that I hadn’t explored.”

At a young age, diving has made a deep impression on Kai so much so that she chose marine biodiversity as the topic for her undergrad thesis. “I realized that there was another world that we had to protect. Luckily, my thesis adviser was a rescue driver, so I was able to effectively communicate my love for the ocean, and my advocacy to keep it clean.” 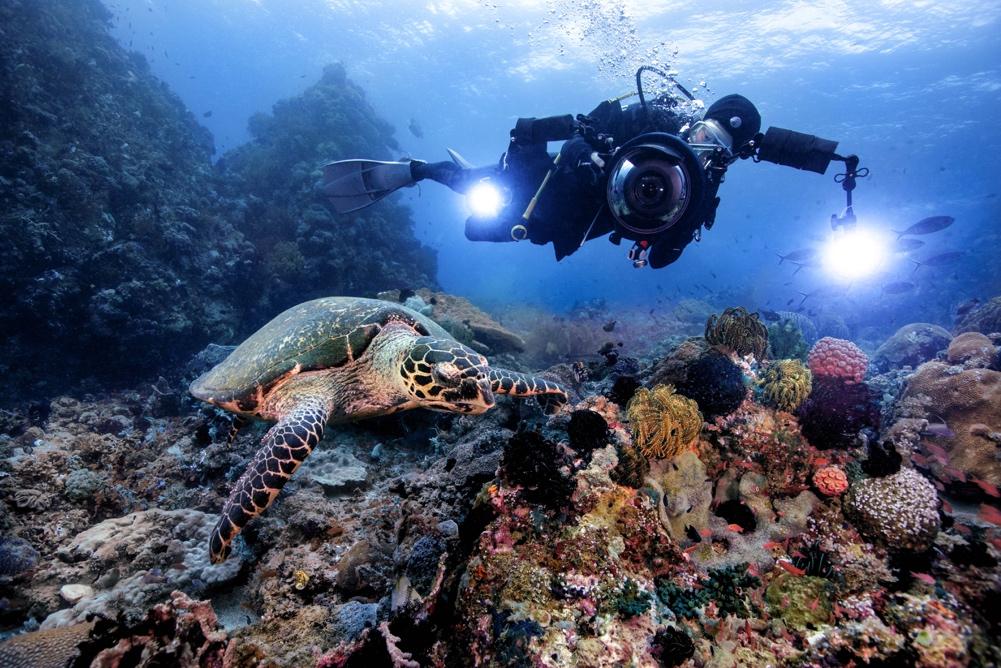 Kai makes sure not to touch anything underwater except for fishing nets that blanket corals. When she’s not diving, she automatically picks up trash along the shoreline and shares with non-diver friends the effects of trash on the oceans.

“I think every diver becomes an automatic conservationist,” says Wowie. “When you dive, you see how fragile the marine creatures are. For example, when you encounter a whale shark, you see up close its eyeball really trained on you and you can’t help but wonder what it’s thinking about you. You really feel that you’re just a guest there.”

Gerry agrees. “The amazement gets you to a point that you’ll appreciate the existence of life beyond what you have on land. I see how much our behavior as humans affect the rest of the living species on this planet. I just imagine if the tables were turned, and all of the life underwater threw their waste on land. How would I feel?” While diving, Gerry brings a small pouch to pick underwater debris. “It probably won’t have a massive effect with regards to how much we’ve polluted everything, but hopefully, the little things count.”

Environmental care also leads to improved livelihoods. Wowie shares how the diving industry had changed the lives of fishermen in Anilao, Batangas. “Some of them who used to do harmful fishing practices are now dive guides. They earn a lot more now, and know better than to throw their anchors into the water, which harm corals. They tell me how they can feed their families better, and how they are able to send their kids to school.” 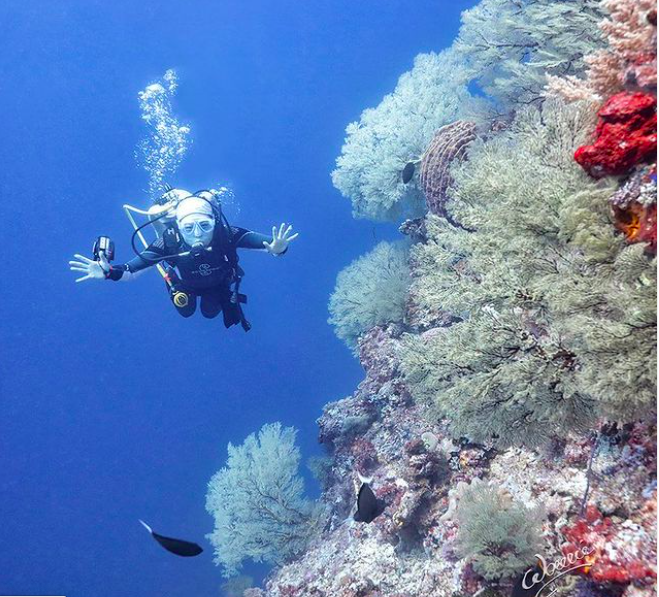 Diving in the Philippines

With the country’s thousands of islands, dive sites are numerous and varied. Our interviewees choose their top 3 diving destinations, and share why these are their favorites. 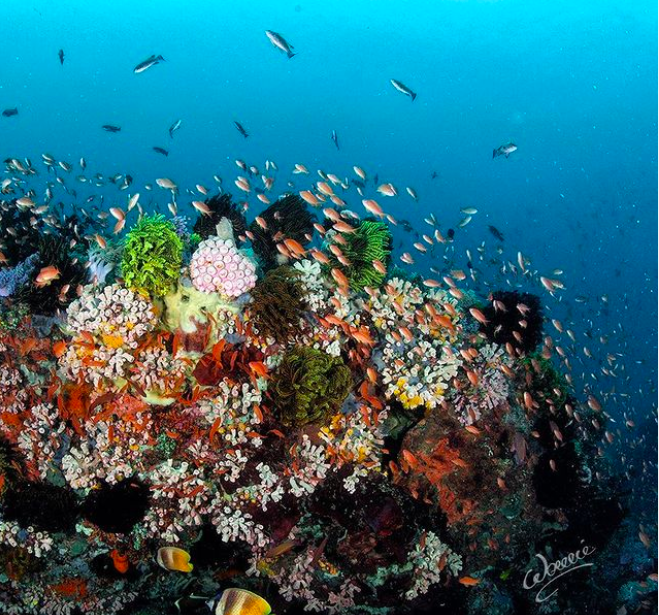 The Pros and Cons of Diving

Though Gerry has overcome his fear of water through diving, he believes that it’s not for everyone. “I don’t recommend it for those who easily panic. The biggest challenge is to trust yourself and your diving companion. In reality, there are some restrictions such as medical conditions. Consult with a physician before pursuing it.”

To prove this point, Kai shares a personal experience. “We were diving in Anilao, and the site looked magical. But suddenly, I started feeling different. I couldn’t breathe, and I kept checking my gauge and my computer. I started removing my gloves, unzipping my suit, and clearing my mask.  Our lead diver signaled to ask if I was ok. I signaled ‘ok’ back but I made sure that I was beside my buddy the whole time. I stretched my arms and breathed properly the best way I could. I didn’t know they were all checking on me the whole time. Later when I told them what happened, I realized that I had an anxiety attack.”

Such is the reason why Gerry recommends surrounding yourself with a good dive group. “You can learn a lot when diving with other people. Find what suits you, and if you find yourself going back to the same group, then you’ve found gold.” Because safety is utmost priority, Gerry emphasizes the importance of discipline. “Diving is a high-risk sport and a bit technical. Conduct safety checks on equipment, practice mindfulness in and out of the water, and watch out for each other before, during, and after a dive. No reason is ever too small to stop a dive.”

Despite her isolated anxiety attack, Kai recommends diving to fellow Filipinos. “They need to experience it and see underwater life with their own eyes to learn how to protect it.”

Wowie echoes this sentiment. “Diving is much more affordable here than in other countries. We’re very fortunate to have the best of the underwater world in our own country. Most of life actually came from the sea. When scientists look at our DNA, relative to what they see in the corals, a lot of commonality suggest that we actually came from there, that we’re connected to them. If the seas die, we all die. I guess it’s hard to explain if you’re not a diver. So, consider being one, and take advantage of what we have.” 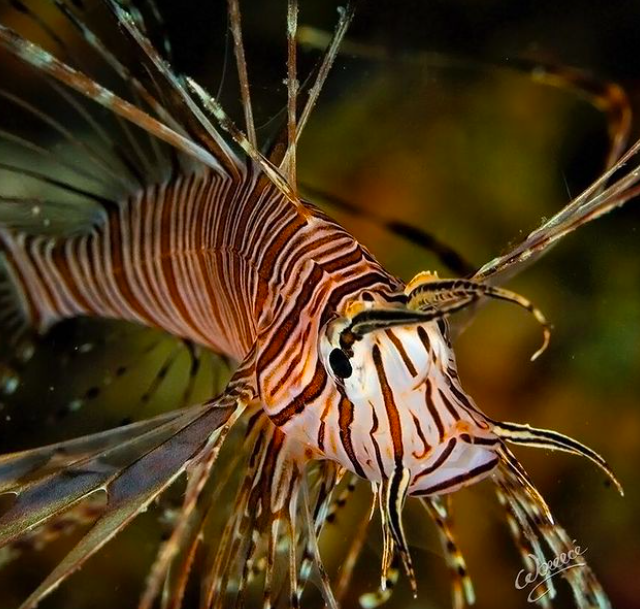 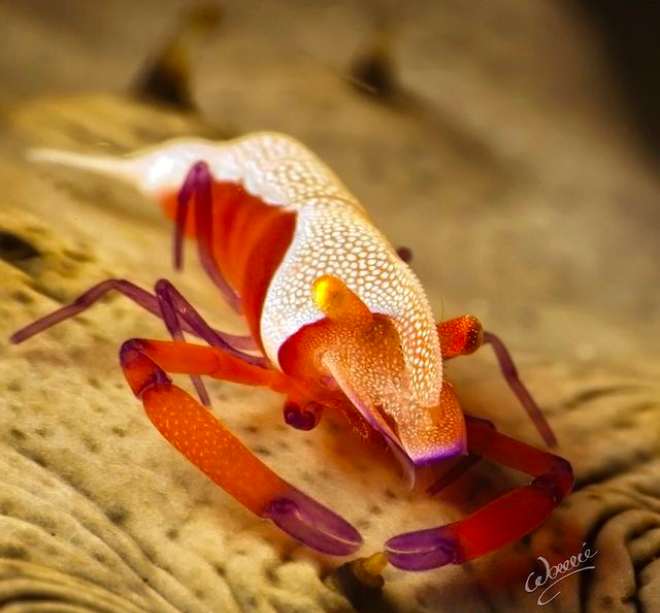 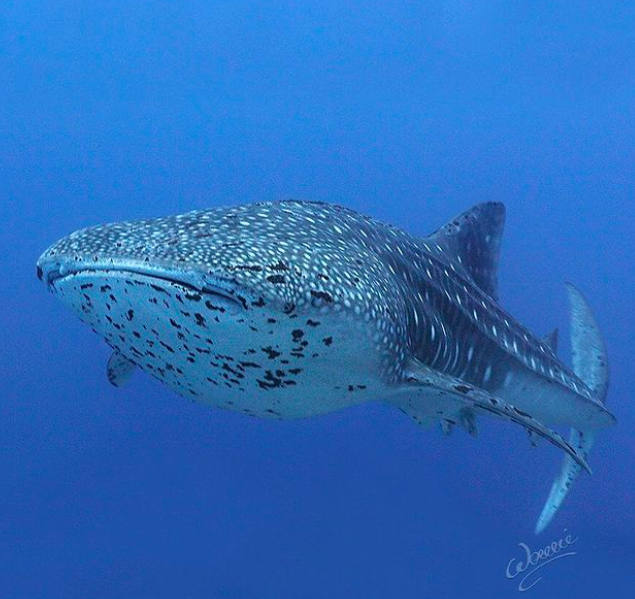 Mission Possible: Say No to Plastic

How Safe Is the Air We Breathe?