“The moon is a loyal companion. It never leaves. It’s always there, watching, steadfast, knowing us in our light and dark moments, changing forever just as we do. Every day it’s a different version of itself. Sometimes weak and wan, sometimes strong and full of light. The moon understands what it means to be human. Uncertain. Alone. Cratered by imperfections.”
– Tahereh Mafi

Nights aren’t not complete without the presence of the moon. Let’s get to know our nocturnal friend better with these fun facts:

1. It’s smaller than the Earth.

The National Aeronautics and Space Administration (NASA) says that the radius of approximately 1,737.5 kilometers. If the Earth were the size of a nickel, the moon would just be as big as a coffee bean.

NASA added that around 30 Earth-sized planets could fit in the distance between our planet and the moon, which is 384,400 kilometers away.

According to NASA, the moon has a very thin and weak atmosphere, which doesn’t protect it from the sun’s radiation or impacts of meteoroids. This is also the reason why temperatures on the moon are extreme, ranging from boiling hot to freezing cold depending on the orientation of the sun.

Astronauts who explored the moon were equipped with spacesuits that had several layers of insulation and equipped with internal heaters and cooling systems.

3. The moon is responsible for the rising and falling of ocean tides.

Around each new and full moon, the pull on the tides increases due to the gravity of the sun that reinforces the moon’s gravity. During these phases, the tides are at their maximum.

Meanwhile, during the first quarter and last quarter phase, the sun’s gravity works against the gravity of the moon. This is when the tide’s range is at its minimum.

4. There may be earthquakes on the moon!

NASA confirmed that the moon may be seismically active. This is based on data gathered between 1969 to 1972, when Apollo astronauts placed seismometers at their landing sites on the moon.

Because the moon is dry, cool and mostly rigid, moonquakes are continuous unlike earthquakes that usually last for half a minute.

5. The moon has its own festival.

The Moon Festival is a holiday in China and several Asian countries. It’s one of the most important celebrations in the Chinese calendar, traditionally held when the moon is at its fullest and roundest.

This event gathers families and friends that admire the bright mid-autumn moon and eat moon cakes. Moon cake is a sweet pastry with red bean or lotus-seed filling. It is believed to be the symbol of completeness and unity among families. 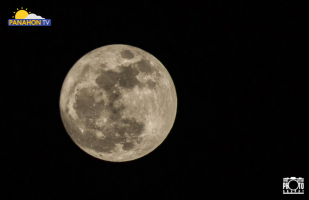 Photo by: Bobs Artajo, one of the Top20 Supermoon Photo Contest winners

6. The full moon has a different name each month.

The names of the Full Moon originated from the Algonquin tribes of Native America which was adapted by some of the Colonial Americans.

January – Full Wolf Moon
It is believed that this full moon appeared when wolves howled in hunger.

March – Full Worm Moon
During spring, the ground softens and earthworm casts reappear. Also known as the Sap Moon, it marks the time when maple sap begins to flow and the annual tapping of maple trees begins.

April – Full Pink Moon
This full moon signaled the appearance of the moss pink or wild ground phlox, one of the first spring flowers.

May – Full Flower Moon
Flowers become abundant during this month.

June – Full Strawberry Moon
The Algonquin tribes consider this moon as a sign of the perfect time to gather ripening strawberries. It is sometimes called as the Rose Moon.

July – Full Buck Moon
During this time, the antlers of bucks are in full-growth mode.

August – Full Sturgeon Moon
Some Native American tribes knew that the sturgeon, or a type of fish that lives in the northern part of the world, was mostly caught during this full moon.

September – Full Corn Moon
This corresponds with the time of harvesting corn.

October – Full Hunter’s Moon
This is the time for hunting as preparation for the long winter ahead.

November – Full Beaver Moon
This is the time when beavers actively build their winter dams in preparation for the cold season.

December – Full Cold Moon
This is the month when the winter cold speeds up.

7. The moon doesn’t have its own light.

The moon merely reflects light from the sun. The light that we see from the moon is an illusion of the reflected light.

Astronomers say it will take hundreds of thousands of moons to get the same brightness of the sun. Even when a moon reaches its full phase, it always shines with a lower magnitude that the sun.

8. The US first conquered the moon.

According to NASA, there were three men who first stepped in the moon. Neil Armstrong, Edwin Aldrin and Michael Collins were the astronauts on the successful Apollo 11 mission in 1969. Armstrong and Aldrin landed on the moon while Collins stayed in orbit around the moon, doing experiments and taking images.

On July 20, 1969, Neil Armstrong became the first human to step on the moon. He and Aldrin were able to walk around the moon for a few hours, picking up bits of dirt and rocks for experiments. They also installed a U.S. flag on the moon.

9. The moon has inspired idioms!

“Once in a blue moon” refers to an even that is rare, seldom or surreal. Blue Moon refers to the second full moon in a month. Normally, there is one full moon each month but there are also rare instances that a second one sneaks in.

This doesn’t literally mean that the moon turns into a bluish color. However, it is believed that during the 1883 Krakatoa Volcano explosion in Indonesia, people noticed that the moon turned blue. Scientists explained that this phenomenon was more likely because of the ash clouds that rose to the top of the Earth’s atmosphere.

10. Some people love staring at the moon!

If you are fond of staring at the moon, you may be a “selenophile” or a person who loves the moon. “Selene” is the Greek name for the Goddess of the Moon while the suffix “phile” comes from the Greek “philos” which means “loving”.

Blueberry is a Mass Communications graduate of New Era University with a passion for music. She has been in the media industry since 2010 and has honed her skills in writing, floor directing and segment producing in a local channel. In 2013 she fulfilled her dream by being an Associate Producer in one of the biggest TV networks in the country. In 2016, she started working for Panahon TV as Live Producer and Segment Producer. Her skills include singing, composing songs and acting.