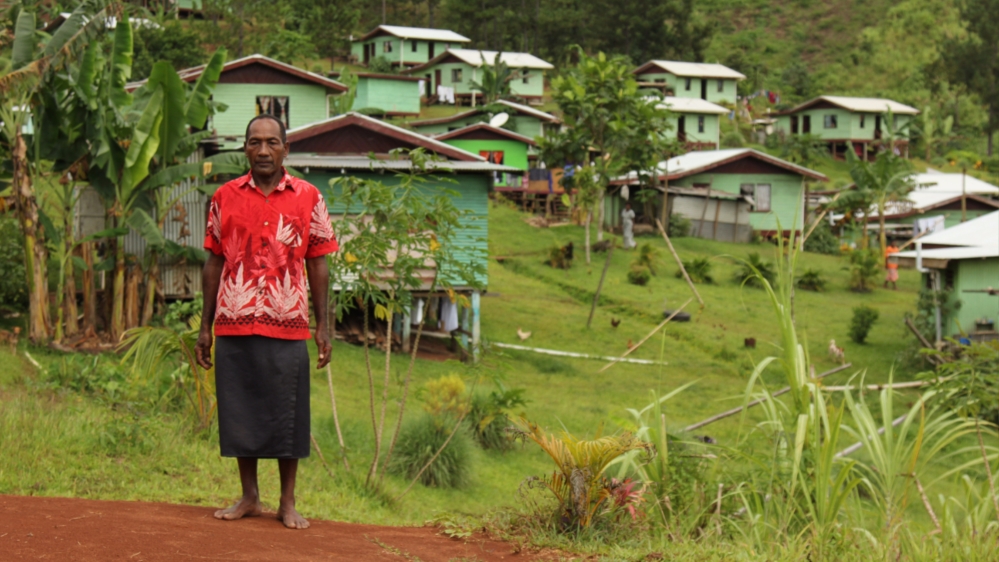 Vunidogoloa, Fiji – Just a few metres from the shoreline, a slab of concrete indicates where Sailosi Ramatu’s home once stood.

The headman of Vunidogoloa village was born here in 1960 on a river estuary in Natewa Bay, on Fiji’s second-largest island, Vanua Levu.

Today, all that remains of his childhood home is the concrete bathroom foundation and three wooden stumps sticking out of the dark, muddy sand. The beach is just a few metres wide, precariously situated between a grassy elevation leading to the main part of the old village and the bay.

“This river was not as wide as this before. It was just there,” said Ramatu, gesturing into the distance.

“When I was eight, I used to cross this river. Now we have to swim.” Before Ramatu was born, previous generations of Vunidogoloans noticed water levels were rising and the mouth of the river was gradually widening.

By the 1950s, they realised the changes were more than an anomaly.

As the decades passed, it got worse. King tides would sweep water into the village, forcing residents to move to higher ground on bamboo rafts. In the 1990s, a young boy drowned after he followed his mother into the river where she was fishing.

“He thought that the river was just on the same level, but it got deep and he couldn’t swim. We just saw the body floating,” Ramatu recalled.

By 2006, regular flooding, soil erosion and the unabated rise of water surrounding their community forced the villagers to ask the Fijian government for help.

In January 2014, Vunidogoloa moved two kilometres inland, becoming the first village in Fiji to relocate because of the effects of climate change.

In Vunidogoloa today, colourful clothes run on lines between identical green wooden houses scattered on a lush hillside, while chickens mill around in the grass.

The 132 villagers are happy here, Ramatu said, as the move has come with new perks.

“We have access to the main road. Children have transportation to school. We’re also close to a health centre,” he said.

But to the headman, these upgrades cannot offset the trauma of leaving the old village.

“Where we were living, we hoped it would be our home forever. We had to leave our beautiful village. It’s painful.”

For much of the world, climate change is a catastrophe unfolding in slow motion, with consequences that can still seemingly be ignored.

But in island nations across the Pacific, climate change has well and truly arrived and is already posing an existential threat to communities.

Rising sea levels have swallowed up five of the Solomon Islands since the mid-20th century.

For Kiribati, a small island nation made up of coral atolls, rising waters pose a threat so dire that in 2014 the government purchased a 20-square-kilometre piece of land in Fiji, to be used to re-settle climate refugees.

Fiji itself has recorded a six-millimetre sea level increase each year since 1993. And that’s just the beginning.

“The worst-case scenario is that we would be looking at one to three metres of sea-level rise [in the next 100 years],” said Elisabeth Holland, director of the Pacific Centre for the Environment and Sustainable Development at the University of the South Pacific.

“We’re looking at significant changes from here on out, so we need to have strong plans in place,” Holland told Al Jazeera.

Tropical cyclones are predicted to increase in intensity in the region. In February 2016, Fiji was struck by the most powerful tropical cyclone to ever hit the country. Cyclone Winston killed 44 Fijians and caused more than $1bn worth of damage.

With nearly one-third of all Fijians currently living in areas prone to these environmental disasters, the government announced last November that 43 villages would need to move to higher ground.

But, said Holland, “What many of these villagers want is to stay exactly where they are, where they’ve been for generations, where their ancestors are buried.

“Many of these villages have been there for the last 100 years. Any time you have to move your home – and this is not a choice that’s in their hands – it’s a terrible challenge.”

Lorem Ipsum is simply dummy text of the printing and typesetting industry. Lorem Ipsum has been the industry's standard dummy text ever since the 1500s, when an unknown printer took a galley of type and scrambled it to make a type specimen book. It has survived not only five centuries, but also the leap into electronic typesetting, remaining essentially unchanged. It was popularised in the 1960s with the release of Letraset sheets containing Lorem Ipsum passages, and more recently with desktop publishing software like Aldus PageMaker including versions of Lorem Ipsum.

At least 5 killed in US Northeast storm

2017 one of the hottest years on record