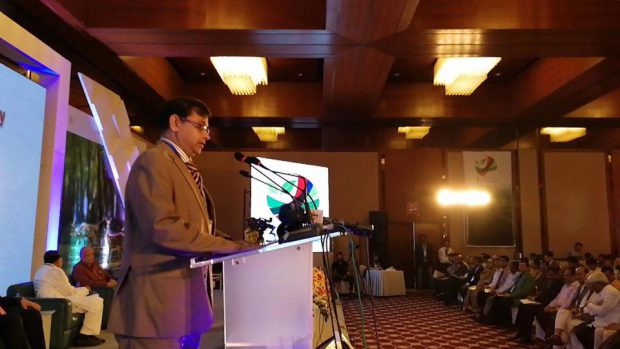 The Asia-Pacific Broadcasting Union, in partnership with Bangladesh TV, gathered Disaster Risk Reduction (DRR) advocates, climate and weather experts, and communication and media practitioners for the Third Climate Change and Disaster Risk Reduction Media Summit in Dhaka in Bangladesh on May 10, 2017. The organizing committee chose to mount this year’s convention in Bangladesh, which is one of the developing countries most vulnerable to natural hazards.

Facing the Challenges of Climate Action

In 2015, three agreements were created to amplify climate change adaptation and disaster mitigation and preparedness. One of them was the Paris Agreement (COP21) whose purpose is to lessen global carbon emission to two degrees, and set five-yearly targets for cutting emissions. Committing the countries that produce the highest carbon to this agreement is the one of its key objectives.

“Change of government in Australia means change of perspective,” agent provocateur Dr. Martin Hadlow shared during the first session of the summit. Australia is one of the countries that strongly support the Paris Agreement, and is on track to meet the targets in 2020.

But despite this positive change, the agreement still faces many challenges. U.S. President Donald Trump, who doesn’t believe in climate change, wants to withdraw from the Paris Agreement. Dr. Hadlow also mentioned that majority of those joining the agreement are developing countries, which are not considered top carbon contributors. To be able to generate bigger funds for the agreement, he said that bigger countries must also ratify the deal.

During the summit’s second session, another challenge was brought up by research investigator Mofizur Rahman. “Health is lagging behind in climate change discussions,” he said, adding that climate actions always include disaster preparedness, recovery and rehabilitation yet seldom discuss the disasters’ impacts on health. This is borne out of the massive gap in information and technology, lack of multidisciplinary approach, and complexity of the problem.

The Role of Media

On the fourth session, Panahon TV Executive Producer Donna May Lina shared the program’s initiatives that reach out to society, such as campus tours, developing citizen correspondents, and internship programs. Through these campaigns, the general public especially the youth, are empowered to get involved in DRR platforms in the Philippines.

Meanwhile, BBC’s Senior Reporter Shihan Zuberi shared the best practices of BBC in disaster broadcasting. “Communication should provide pscho-social benefits.” According to him, BBC believes that effective communication is needs-based, actionable, positive, and responsive. Reporters must also understand that the information they communicate through different media platforms should serve as the voice of calamity survivors, and not just stories about them.

The Asia-Pacific Broadcasting Union is a non-profit, professional association of broadcasting organisations. It currently has over 280 members in 57 countries and regions, reaching a potential audience of about 3 billion people. One of the organization’s thrust is to promote disaster preparedness to lessen casualty when disasters strike. They also conduct conferences among media practitioners to help them improve their climate change and DRR content.

How Safe Is the Air We Breathe?