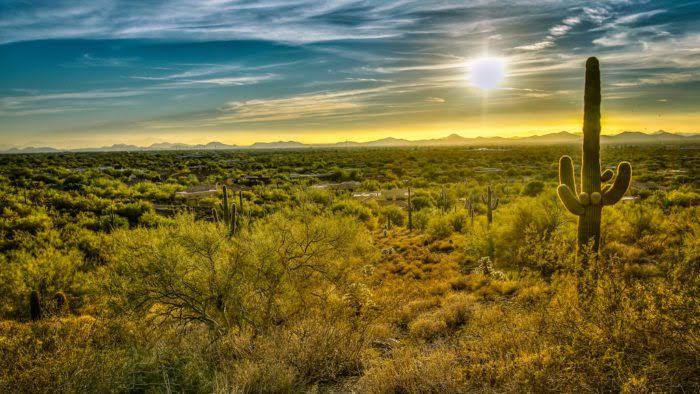 According to Guinness World Records, the “Sunniest City on Earth,” with sunlight and mild temperatures for at least 91 percent of the year is the city of Yuma in Arizona.

Located in southwest Arizona, Yuma experiences an average of 4,015 hours of sunshine per year. The city has roughly 100,000 people and is located between the Kofa Mountain Range and a wildlife refuge, making it a popular destination for outdoor activities.

July is the warmest month on average, with 107 degrees Fahrenheit (42C). Yuma reached a record high of 124 degrees Fahrenheit in July 1995. (51C). The city is the primary transportation station for commodities traveling to and from Mexico, as it is only 30 miles (48 km) from the US-Mexico border.

Yuma only gets three inches of rain per year, so there’s no need for rain boots or raincoats. Yuma reaches a wonderfully pleasant period of the year as September approaches. The nights are incredible, and Yumans can finally break out their cardigans and flannels, while out-of-town tourists may still be wearing shorts due to the lack of extreme cold. You’ll know spring has arrived when the temperatures start to rise again, and the fresh scent of orange blossoms fills the air.

Does this mean that Yuma is the hottest city in the US?

With average temperatures of 90°F for 175 days per year, Yuma may be considered as the hottest city in the US, and Arizona as the sunniest of all states. However, it should be noted that Greenland Ranch, California, also known as Death Valley, had the hottest temperature ever recorded in the United States, at 10 degrees higher.

Why is Arizona so hot?

Residents may be used to the heat in Arizona, but it may be sweltering for tourists and visitors, especially during the summer months. Arizona’s hottest months are from May to September.

People in Arizona are subjected to extraordinarily high temperatures throughout the summer months due to the state’s mainly arid climate. Consider the day of June 16, 2016, when the temperature in the city of Phoenix reached 118 degrees Fahrenheit, and in Tucson City, it earned 115 degrees Fahrenheit.

Even though these temperatures were substantially higher than the summer average (temperatures this day smashed daily heat records across Arizona), they reflect Arizona’s unique situation.

Yuma is not only the sunniest place on earth but also the ultimate escape for outdoor enthusiasts looking for their next big adventure. The city is known for its parks and heritage places honoring its long history. Its vital riverside and several parks and recreation places make it a pleasant destination.

Is a Panahon TV intern who is currently pursuing her bachelor’s degree in communication at First City Providential College (FCPC). She is a freelance photographer for private clients, having worked as a professional photographer for civil events. She is currently part of FCPC’s English and Filipino newspaper publication as Photojournalist and Sports Writer.

WHEN THE LIGHT IS ON | The Unseen Effects of Light Pollution

Is Earth Really Healing? | The Effects of Pandemic on the Environment (Part 2)

Is Earth Really Healing? | The Effects of Pandemic on the Environment (Part 1)