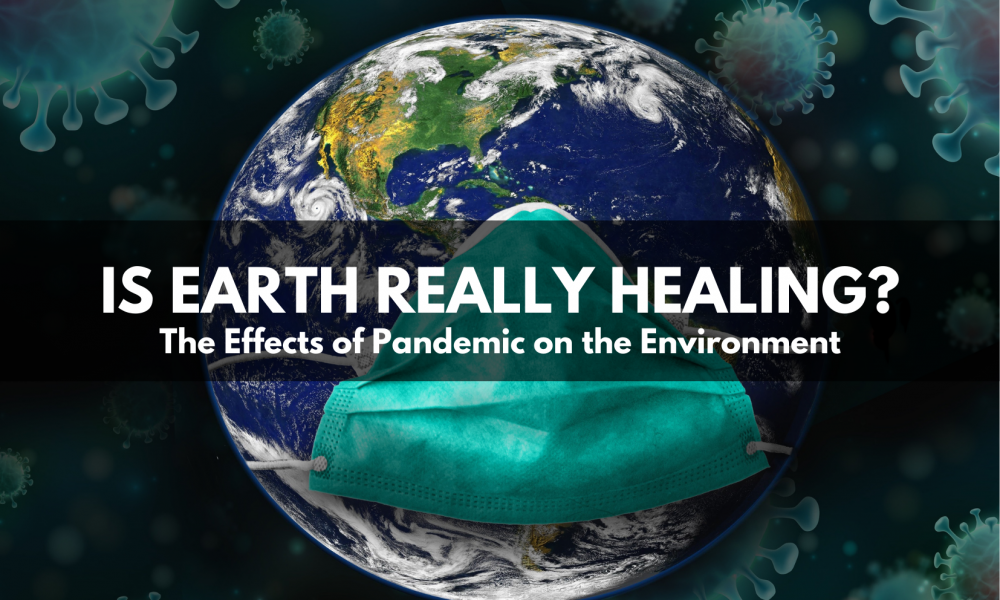 In the span of two years since living through a pandemic, the world has drastically changed. Millions of lives have been lost, hundreds of millions more have been ill, and those who didn’t get infected still had their lives turned upside down. As the effects on human lives are very evident, let’s look at how the pandemic has affected our environment.

As a means to help combat COVID-19, countries have taken necessary remedial measures to reduce face-to-face interaction. This included lockdowns, where human and industrial operations were suspended, which led to several positive impacts on the environment.

NASA and European Space Agency (ESA) pollution monitoring satellites reported a decline in nitrogen dioxide (NO2) over China following its attempt to prevent the spread of the virus via enforced quarantine. Nitrogen dioxide is released when fossil fuels such as oil, gas, or coal are burned. Short-term exposures to this can worsen respiratory illnesses, while longer exposures may contribute to the development of asthma and increase susceptibility to respiratory infections. This gas is also responsible for the acid rain that forms when this gas and other NOx react with water, oxygen, and other compounds in the atmosphere.

According to research by the Center for Research on Energy and Clean Air (CREA), while Metro Manila was under ECQ from March 15 to May 15, 2020, tropospheric nitrogen dioxide (NO2) levels declined by nearly 52% compared to 2019 values. Due to the shutdown of industry and enterprises, the country’s electricity demand has dropped by 40%. Singapore, Indonesia, and Thailand also saw some improvements in air quality.

Transportation is one of the biggest contributors to air pollution. As per the data from the Department of Environment and Natural Resources (DENR), vehicular sources account for 65% of air pollution in the Philippines, primarily in the capital. Globally, driving and flying are responsible for 72% and 11% respectively,  of all transportation-related greenhouse gas emissions. As countries seal their borders, numerous flights were canceled, and those that remained had their maximum capacity reduced. This resulted in a significant decrease in greenhouse gas emissions.

Industrial and domestic wastewater is dumped into rivers and other water sources. Since most industries were entirely shut down during the COVID-19 outbreak, it became a significant factor in the improvement of water quality.

Here in the Philippines, water quality is expected to improve, according to the DENR. The restrictions imposed on restaurants, malls, as well as tourist and recreational facilities, resulted in a reduction in wastewater outflow. This environmental recovery is crucial since the need for clean water has grown in order to avoid infection.

In Ecuador, research showed that residents of Salinas, Manta, and the Galapagos Islands have definitely noted a beneficial shift in the quality of beaches as a result of fewer tourists. Aside from that, there are marine species that came back.

Water pollution has also decreased in the coastal regions of Bangladesh, Malaysia, Thailand, the Maldives, and Indonesia.

An undesirable sound produced by man-made operations, such as the transit of engine vehicles and high-volume tunes, is referred to as environmental noise. Since the majority of the population stayed at home, there was a significant reduction in the utilization of private and public transportation. In addition, practically all commercial activity has ceased. All of these measures have resulted in a notable decrease in noise levels in most cities throughout the world.

According to the National Geographic Society, noise pollution affects millions of individuals every day. Noise-Induced Hearing Loss (NIHL) is the most common health condition caused by it. Loud noise can also lead to excessive blood pressure, heart disease, sleep problems, and stress. Many children who live near noisy airports or streets have been reported to be stressed and to have additional issues such as memory loss, attention deficits, and reading difficulties. Aside from this, animals that utilize sound to navigate, obtain food, attract mates, and avoid predators might have difficulty doing such activities, which has an impact on their survival abilities.

Initially, it would seem that the global economic slowdown has been beneficial to the environment, but the pandemic has had detrimental effects on the environment too.

Medical waste production has surged significantly since the breakout of COVID-19, posing a serious hazard to human health and the environment. This was caused by the dramatic increase in the use of disposable personal protective equipment (PPE) kits, gloves, face masks, medicines, dressing materials, and so on.

During the pandemic, medical waste in Wuhan, China has increased from 40 tons to 250 tons per day, considering the 50-ton per day processing capacity. San Lazaro Hospital in Manila generates 10,000 kilograms of infectious medical waste monthly and nationally, an estimated 280 metric tons of medical waste generated daily, according to the DENR data. To address this, DENR will develop a health care waste management project in collaboration with the United Nations Development Program (UNDP).

It’s not only the hospitals that are producing medical waste. Since everyone has been wearing face masks, face shields, and other safety devices, even ordinary households are generating an increase in medical waste. Most people, however, dump these in open places or mix them with domestic garbage due to a lack of awareness about infectious waste management. Garbage collectors and other waste workers are the first to be exposed to possible infection. Furthermore, the careless disposal of these wastes clogs waterways and contributes to environmental damage.

Regular visitors and locals in Bauan, a famous diving destination in Batangas, have noticed an increase in the number of face masks and other PPE gathered from the bottom. The same can be said about the reefs of Anilao, Batangas, which are covered with face masks discovered by divers.

Face masks contain micro and nano plastics, which not only endanger wildlife but also pollute our waterways. According to researchers, disposable masks may potentially release harmful contaminants such as heavy metals and poisonous dyes.

The implementation of social distancing measures had an effect on the recycling market too, impacting livelihoods. Lower oil demand and prices drive down the cost of virgin plastics, even more, further reducing the competitiveness of recycled plastics. The temporary ban on cross-border movements affected developing countries relying on foreign technology for garbage recycling. Because of this, the majority of the waste generated during the pandemic is disposed of rather than recycled.

The extensive use of chemicals used as disinfectants also had an impact on the ecosystem. This could harm beneficial organisms that aren’t being targeted, causing an ecological imbalance. In China, they requested wastewater treatment plants to improve their disinfection protocols, primarily by boosting chlorine use to prevent the coronavirus from spreading through wastewater. However, there is no indication that the virus can survive in drinking water or wastewater, and too much chlorine in the water can be hazardous to people’s health.

“Is earth really healing?” Given the circumstances, is there a simple answer to this question? One thing we need to realize is that nature can exist without us. But we, humans, cannot survive without her, so we need to be more proactive in saving her, rather than rely on incidental effects brought by our battle against the pandemic.

Is a Panahon TV intern who is currently pursuing her bachelor's degree in broadcasting at the Polytechnic University of the Philippines. She is also a writer in her college's organization for documentary-making.

WHEN THE LIGHT IS ON | The Unseen Effects of Light Pollution

Is Earth Really Healing? | The Effects of Pandemic on the Environment (Part 2)