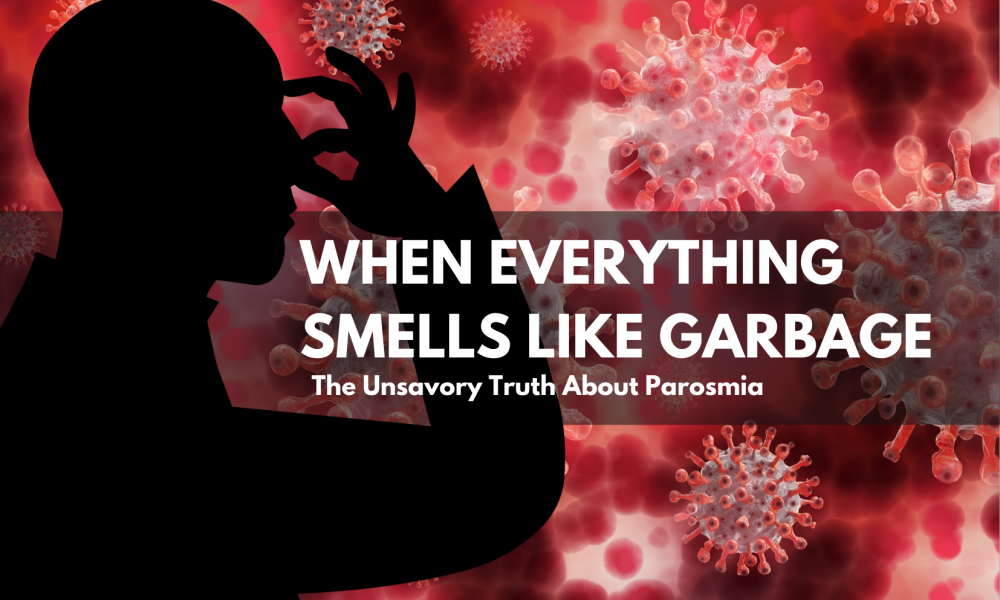 Imagine this: you go to your favorite restaurant and order your favorite dish. You’re all excited. But when the food arrives, something‘s wrong. That delicious aroma you used to love is missing. And when you bite into it, it doesn’t taste anything like how you remember it. Instead, it has a burnt, rotten flavor. Frustrating, isn’t it?

One of the symptoms of COVID-19 is losing the sense of smell and taste. As a person recovers, it is expected that these senses will return to normal. But this isn’t always the case. For some, their sense of smell is still distorted even after a year. This condition is known as “COVID smell”, or parosmia in medical terms.

“I don’t think anyone understands how much it affects your daily life. It’s not just that foods taste rotten, but it’s garbage. It’s sewage. It’s gasoline. It’s ammonia. It’s vinegar. It’s mold. Imagine if all foods taste like your least favorite food. Like imagine the worst smell that you have ever smelled in your life and it’s that, but everything.” This is how 20-year-old Natalia Cano describes parosmia. In her Tiktok video, Natalia shares that she still has to live with this condition even months after recovering from COVID-19. The video went viral, and many who suffer from the same condition shared similar experiences:

“I’ve had it for a year… tonight, I came out to get it (my favorite pasta), and it smells like gasoline to me. I want to cry.”

“My fiancé cooked ham tonight… the whole house smells like the pig carcass is rotting.”

“I can’t bear this smell in my nose. Burnt? Smoky? Rotting? I can’t describe it… It’s making me nauseous all day every day.”

In another video uploaded by Natalia, she mentioned that her disorder has a negative impact on her physical and mental health. She drinks protein shakes and Clif bars as meal replacements since eating is torture for her and even drinking water is disgusting. This led her to lose an estimated 40 pounds. She is also experiencing hair fall and other symptoms that are associated with having anorexia.

Parosmia is defined by the National Institute on Deafness and Other Communication Disorders as a disturbance in the normal sense of smell. It is a condition in which the odors of things in your environment are altered. Fruits and other foods smell like garbage, sewage, or decaying flesh to those with this health condition.

Other terms, including phantosmia, anosmia, and hyposmia are often mistaken for parosmia.

How does COVID-19 cause parosmia?

According to Dr. Liji Thomas’ research released on September 3, 2021, out of 1,468 COVID-19 patients with smell loss for more than 7 days, 620 (23.9%) recovered from parosmia after 11 months, while 848 (63.5%) did not. Parosmia is caused by the virus’ damage to the olfactory sensory neurons found in the nose, which causes them to deliver inaccurate signals to the brain about smells. This is supported by a study conducted by a group of neurobiologists from Harvard Medical School.

Other causes of parosmia include:

Are there treatments for this?

The majority of COVID-19-induced parosmia cases eventually resolve on their own as the damaged neurons heal. However, there are some situations where this becomes permanent. Parosmia has no cure, but some medications can help ease the symptoms. It is important to remember that medications should only be used as prescribed by a doctor and that self-medication is strongly discouraged.

Although further research is needed to confirm if olfactory training therapy, commonly known as “smell training,” is effective, it is also an option to consider. In this procedure, the patient must smell four different scents and spend at least 15 seconds on each one. This activity is repeated twice daily for several months. Aside from medication and training, clinical trials are already being conducted to find more potential treatments.

Parosmia is not a new disorder. But as one of COVID-19’s possible long-term effects, people have become more aware of this condition and how debilitating it can be for those who have to live with it.

For Natalia, it would seem that her sense of smell has been replaced with a sense of regret: “If I could go back to that day and work where I pulled down my mask to grab that sample, I would and I think about it almost every day and I cry because I don’t know why this happened to me.”

Before ending her video, Natalia reminds her viewers of the importance of putting on their masks and getting vaccinated. She also expresses hope that with the help of doctors, her parosmia will eventually improve.

Is a Panahon TV intern who is currently pursuing her bachelor's degree in broadcasting at the Polytechnic University of the Philippines. She is also a writer in her college's organization for documentary-making.

How and When Can We Achieve Herd Immunity

Why Ginger Became Popular During the Pandemic

COVID-19 is airborne. What do we do now?

This Filipino Priest is Developing an Oral Vaccine for COVID