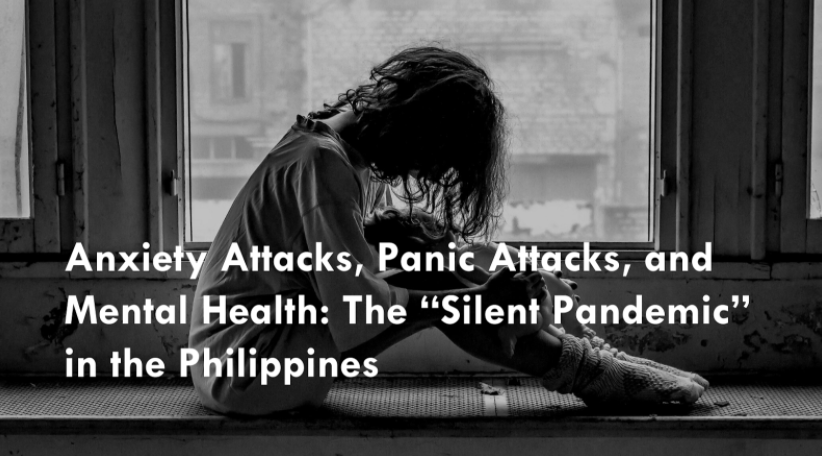 Rachel* has been plagued by these constant emotions, rooted from bullying, personal losses, self-loathing, and problems in school and within her family. These left her weary, hospitalized, and wanting to end her own life, which would have happened if not for the intervention from others.

Mental illness has become the third most common disability in the Philippines, wherein 6 million Filipinos live with depression and anxiety. We now have the third highest rate of mental disorders in the Western Pacific (Martinez et al., 2020, as cited by Maravilla and Tan, 2021).

As COVID-19 continues to spread and disrupt people’s lives, a ‘silent pandemic’ has also emerged. However, the latter existed long before COVID and has only been brought to light in recent years.

This problem lies from the prevailing stigma. Some people still use derogatory terms like “abnoy” and “baliw” even in casual conversations. The Department of Health (2008) identifies the lack of programs to promote mental health as one of the reasons.

To address this need, groups such as the Masters Psychological Services (MPS), an organization that offers cost-effective psychological services to Filipinos, have been formed.

According to MPS founder Christian Jasper Nicomedes, RPm, MPsy, there may be some progress towards erasing the stigma, but sustainable education for all sectors of the society is still needed.

In a 2018 report by DOH, Filipinos’ major forms of mental health disorder between 2000-2015 are schizophrenia, bipolar disorder, major depressive disorder, dementia, and epilepsy.

A new set of data is expected to be released this year. According to Nicomedes, if the number of cases go up, it means higher awareness.

Mental health struggles differ from person to person as their dysfunctions may come from various causes, as explained on the “Causes of Mental Illness” by Smitha Bhandari:

With so many considerations that could lead to mental health struggles, there are no big or small issues when it comes to understanding a person’s distress, so it’s important to exercise sensitivity and caution.

Panic attacks and anxiety attacks are some of the mental disorders that can harm anyone and everyone as it comes in unexpectedly. These are often triggered by fear, and if left unattended, they can lead to more severe conditions.

Andrew* is a “complex person” for casual bystanders. He doesn’t socialize a lot and seems to prefer to stay in his own circle. To friends who knew him, they saw a fun-loving and passionate person who speaks how he truly feels.

His headstrong and fiery persona hides a painful memory. Last year, he was diagnosed with anxiety, a disorder that stems from the death of his parents and other troubles, including issues with his former lover, which worsened his situation.

He confided that it became debilitating to the point that he’s unable to socialize properly because he no longer trusts himself and has become an “unreliable friend” to others. There were also moments when he suffered quick bouts of fear that intensified his condition and left him exhausted and scared.

What Andrew went through was an anxiety attack. Sheryl Ankrom (2020) described it as “a sudden and intense episode of fear and anxiety that can sometimes occur unexpectedly for no apparent reason, but they can also be linked to specific triggers”.

While anxiety attacks are not officially recognized as an actual disorder by the Diagnostic and Statistical Manual of Mental Disorders (DSM-5), the leading book for mental health diagnosis; they can, however, comorbid with other common psychiatric disorders so it is imperative to be addressed.

Symptoms of Anxiety Attacks:
Strong fear
Easy to get irritated
Dryness of lips and mouth
Difficulty to stay focused
Pain in joints and muscles
Easy to get tired
Difficulty sleeping
Distress

Three years ago, Peter* was a jolly and easy person to hang out with. He prided himself on getting along with just about anyone. But he found it hard to be honest with his feelings. Despite the heartbreaks, disappointments, and mistakes, he insisted that he was okay, even though he was not.

As the years passed by, this dishonesty became detrimental to his mental well-being. He became snappish, irritable, and emotional especially during the pandemic as the lockdown further aggravated his situation.

Everything came crashing down when he suffered a panic attack. He cried uncontrollably in his bathroom after a simple argument with his mother for simply putting a hot rice bowl in a plastic mat.

He described the feeling as a twisting knot in his chest and stomach. There were moments when he also felt like blacking out as he screamed. But it became a wake-up call for him to be more open with his struggles and to let go of his demons for his wounds to heal.

The DSM-5 defines a panic attack as “an abrupt surge of intense fear or intense discomfort that reaches a peak within minutes.”

Similar to anxiety attacks, they can occur instantly and can be prompted by certain triggers.

It must be understood that the role of treatments is to help improve the person’s overall well-being, and not to completely remove the illness. It is also crucial to find a method that suits the person’s needs. Some interventions recommended by Nicomedes are:

Identify triggers – Identifying one’s triggers includes asking these questions: What happened? Where did it happen? Who saw you? What was happening around you? What usually happens when you suffer from anxiety attacks/panic attacks? What do you feel before, during, and after your attack?
Cognitive behavioral therapy – This therapy helps a person to see things that worry them in a new way. By helping them pinpoint, reframe, and neutralize the negative thoughts that trigger their disorder, they would be able to manage them better.
Biofeedback therapy – In this therapy, they monitor one’s heart rate, sweating rate, breathing rate, and then provide them with triggers to show them when they rise and fall to help them become more aware of them.
Mindfulness Technique – The mindfulness technique is a mental health exercise that helps a person to observe and focus his / her thoughts, emotions, and sensations. This can be done anywhere for as quick as 5 minutes to as long as 30 minutes.
Mindfulness Technique Procedures
Look around and choose an object to focus on.
Clear your mind.
Take deep breaths.
If there are passing thoughts, acknowledge it and let it through.
After the exercise, look back at all of the passing thoughts because those are the things that needed your attention.

Mental health issues in the Philippines are rooted in decades of indifference and stigma. We may have made strides in raising awareness about it, but there’s still a long way to go.

A great step towards this direction is the enactment of Republic Act 11036, the Philippine Mental Health Law.

According to this law, the state is committed to:

The battle against this silent pandemic is long and hard. But the key to winning it, everyone — including the person who has it and the people around him — is taking that first step of acceptance.

####
*The names indicated in the anecdotes were altered to protect their identities.

The Art of Mindfulness

Keep an Eye on Your Eyes

Huwag Mahihiyang Magtanong: The Difference Between Branded And Generic Medicines