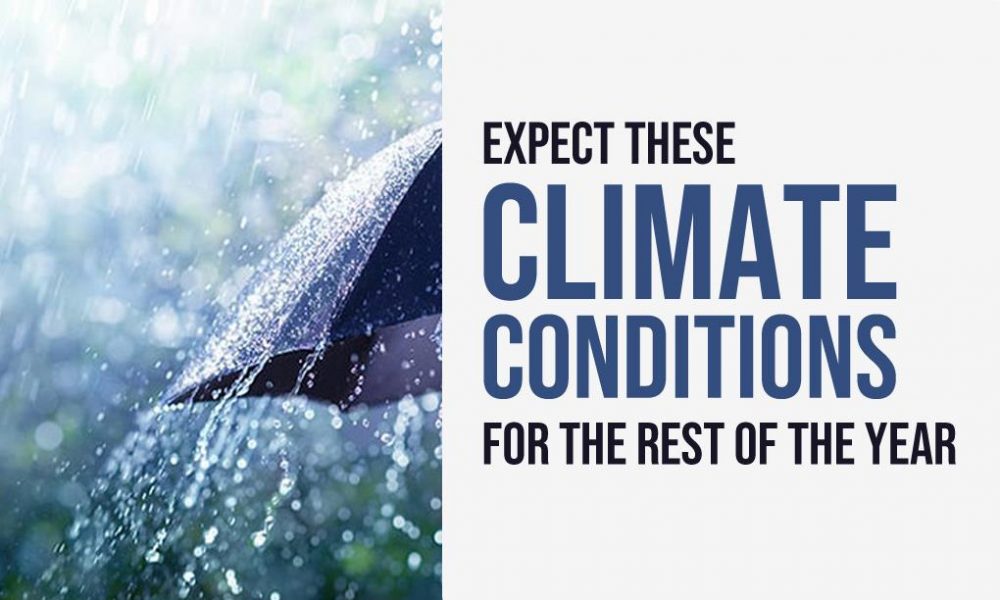 Tropical Storm Jolina, the country’s 10th Tropical Cyclone for year, may have already exited the landmass, but not before making landfall nine times. According to the National Disaster Risk Reduction and Management Council (NDRRMC), the storm left 3 people dead and 31 missing last Sept 8, 2021.

Now, the country holds its breath for the approach of Typhoon Kiko. PAGASA has already declared Tropical Cyclone Wind Signals (TCWS) for areas in Luzon such as Cagayan and Batanes. Meanwhile, PAGASA says that both Kiko and Jolina are intensifying the Southwest Monsoon (Habagat), predicted to bring rains in Luzon and Visayas. 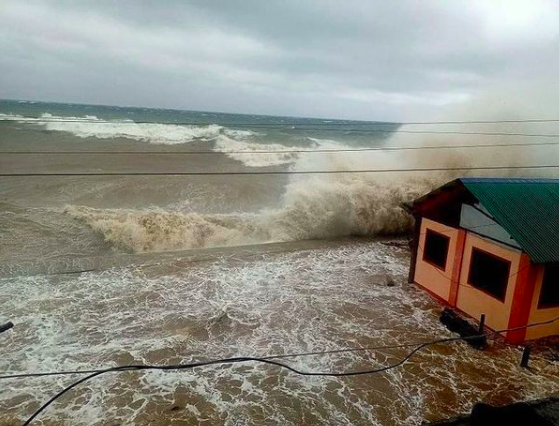 Weeks before these weather disturbances, PAGASA held its monthly climate outlook forum to discuss climate conditions for the rest of the year. “For the past months, we witnessed localized thunderstorms especially in the afternoon and at night,” said Senior Weather Specialist Rusy G. Abastillas in a mix of Filipino and English. Localized thunderstorms are short-lived storms that happen when temperatures on the ground are at their peak, usually during the late afternoon and early evening.

According to Abastillas, these weather systems may also affect the Philippines in the next 5 months (September 2021 – January 2022): 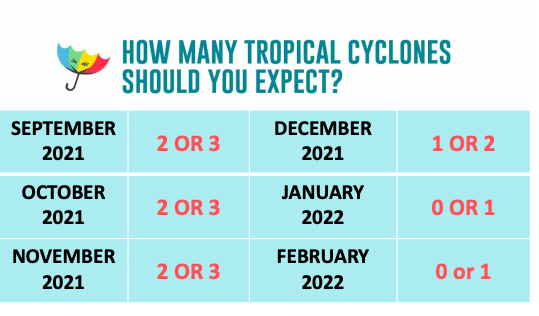 Number of Tropical Cyclones we can expect until November this year (source: PAGASA)

Atmospheric conditions are dynamic, which means they may change any time. While the World Meteorological Society (WMO) announced the end of La Niña last June, it released a new report stating the possible re-emergence of weak La Niña later this year.

La Niña, which refers to the cooling of ocean surface, brings above-normal rainfall. Its harmful impacts include floods and landslides. “There are some models saying that La Niña is likely to persist during October, November, December, and January,” said PAGASA Assistant Weather Services Chief Ana Liza Solis. “Currently, we declared a La Niña Watch. This means that conditions are favorable for the development of La Niña within the next 6 months, with the probability of around 55%. La Niña is more likely to start in the October, November, December season. It is predicted to persist not long enough to constitute a La Niña event.” Nevertheless, Filipinos need to brace for the impacts of increased rainfall.

Weak La Niña was also observed from October 2020 to March this year. Solis stressed that back-to-back La Niña events are not uncommon. Moreover, historical data indicates that the second cycle usually produces weaker rainfall. However vigilance is still needed. “We need to keep monitoring. We can’t discount the possibility of a Super Typhoon, so we have to be prepared at all times.”

The fact that La Niña brings increased rainfall should already be cause for heightened preparation. “We still need to take caution. It can still be potentially dangerous. Hopefully, we won’t experience strong cyclones like what happened during Yolanda. There was no La Niña at the time, but the effects were devastating. These events can happen at any given time,” warned Solis.

She added that from 1948 to 2020, data shows that disastrous tropical cyclones usually pass the PAR from September to December. 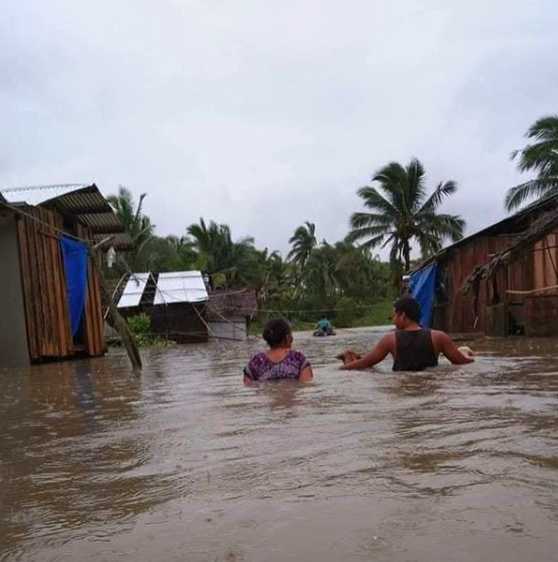 Massive flood in Samar due to #JolinaPH (photo by RMN Tacloban)

According to Solis, the Southwest Monsoon is likely to transition into the Northeast Monsoon (Amihan) or the cool northeast wind this October. “During this time, rains will be more frequent in the eastern section of Luzon,” she explained. “Still, areas in Isabela, parts of Central Luzon including Metro Manila, and most parts of MIMAROPA and Bicol are likely to experience above-normal rainfall conditions. This is probably due to the occurrence of tropical cyclones.”

For the rest of the year, it is possible for the country to experience temperatures from near average to above average. But it is important to note that last July, many PAGASA stations broke their extreme temperature records. “Clark, Pampanga recorded 35.4˚C last July 2,” said Abastillas. “This surpassed the former highest temperature of 35.2 ˚C in July 2017. The rest of the record-breaking temperatures are from Mindanao.” These areas include Cotabato City, El Salvador in Misamis Oriental, Malaybalay in Bukidnon, Davao City, Hinatuan in Suriago del Sur, and Zamboanga City. “Last July, Mindanao-PAGASA Regional Services Division issued a warning because of the extreme heat. Areas experienced more than 35 ˚C for almost five consecutive days,” said Abastillas. 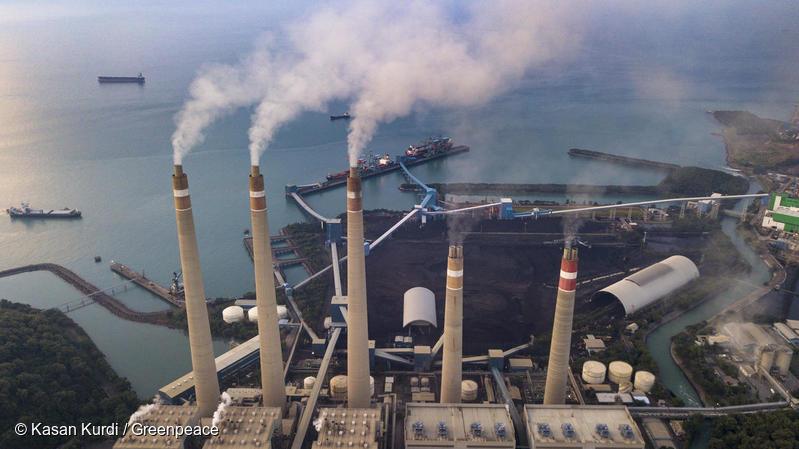 Coal power plants like this one in Indonesia are driving global warming.

When Panahon TV Executive Producer Donna May Lina asked if the alarming temperature rise is due to greenhouse gasses, Solis quickly replied in the affirmative. “Global warming significantly impacts this upward trend in temperatures. Anthropogenic or man-made greenhouses gases have greater impacts than natural greenhouse gases,” she explained

Even La Niña patterns are changing. “The gaps between stronger La Niña and El Niño episodes are getting shorter. If we look at our historical records, more back-to-back La Niña events are happening, which shortens the cycle of its stronger episodes.”

However, La Niña’s cooling effect will do little to curb the global temperature rise. According to the WMO report, “temperatures over land areas are expected to be above average between September and November, especially in the northern hemisphere.”

Abastillas echoed this observation. “The frequency of flooding last July didn’t happen just here in the Philippines. China also experienced it, as well as in Europe including Germany.”

Climate change is wreaking devastation all over the world, a fact confirmed by the  6th report from the Intergovernmental Panel on Climate Change (IPCC) released last August 2021. The need to reduce greenhouse gases is more pressing than ever. The message rings loud and clear: improved disaster risk management may save lives, but more lives can be spared if we all act now to save the planet.

Heat Waves, Climate Emergency, and the Race for Human Survival

Why Water Has Been Bringing the World’s Most Disastrous Events