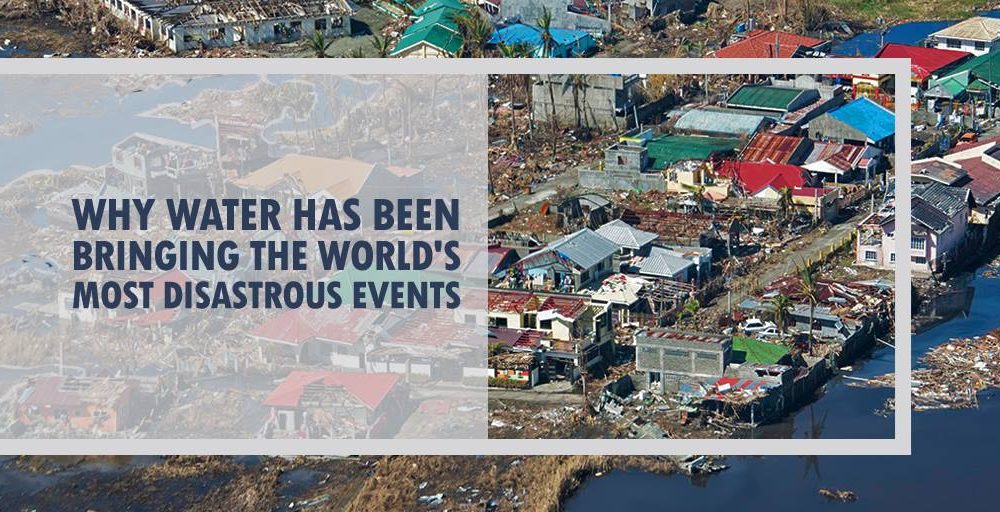 To say that water is life is an undisputable truth. While the human body is 60% water, the ocean covers about 70% of our planet. But the ocean does more than providing food, livelihood and transportation means, it also supplies about half of the oxygen we breathe.

However, water can also destroy life. In July, the World Meteorological Organization or WMO reported that in the last 50 years, water-related disasters have been causing the largest economic and human destruction all over the world.

Water-related disasters that led to the most deaths

In both Asia and Europe, storms and floods caused the biggest economic losses. In fact, data from the last five decades show that over 70% of the world’s financial damage are due to water hazards.

Water-Related Disasters in the Philippines

Floods, storms, landslides and other water-related disasters are no strangers to the Philippines. In the same month WMO released its report, Luzon experienced non-stop rains due to the combined effects of Typhoon Fabian and the Southwest Monsoon. The Department of Agriculture pegged the agriculture damage at almost ₱70 million, the National Disaster Risk Reduction and Management Council (NDRRMC) reported 80 million people affected.

But according to Rosalie Pagulayan, a hydrologist at the Philippine Atmospheric, Geophysical and Astronomical Services Administration (PAGASA), floods have always been part of our country’s history. “There are flooding reports as early as the 1600s during the Spanish rule. So, we can say that flooding in Metro Manila or in our country is nothing new.” The reason for this is that the Philippines is the most typhoon-visited country in the world. “We experience about 20 typhoons in a year. We have two kinds of monsoons, and other weather systems that also produce rain,” says Pagulayan.

Aside from Super Typhoon Yolanda in 2013, which was considered as the “strongest tropical cyclone to make landfall in recorded history”, Pagulayan mentions some of the water-related disasters that have made a mark on our history:

It might sound like a scene from the Bible’s Old Testament. But much like what Noah experienced after building an ark, Central Luzon grappled with rains that continued for 40 days in 1972. “It was one of the worst disasters in terms of magnitude. According to eyewitness accounts, it seemed like the Pampanga River Basin and the Agno River [in Pangasinan] merged to create a water world,” shares Pagulayan. “The rains weren’t strong, but they were continuous.”

The rainfall was caused by a chain of weather disturbances—a tropical storm, 2 typhoons and a tropical depression, all enhanced by the Southwest Monsoon. Almost 600 died, while damage to agricultural and property amounted to ₱2 billion. “Crop devastation was huge, especially since Central Luzon is considered as the rice granary of the Philippines,” says Pagulayan. The disaster was even cited as one of the reasons why former President Ferdinand Marcos declared martial law two months later.

In the realm of public service, the great flood prompted PAGASA to establish its first flood forecasting and warning system. “Because of a grant aid from the government of Japan, we set up a Pampanga River Basin Flood Forecasting and Warning System. Later on, similar systems were established to cover Agno, Bicol and Cagayan.”

Before Super Typhoon Yolanda, the 1991 Ormoc Tragedy in Leyte held the record for causing the most number of deaths due to a weather disturbance. “There were almost 6,000 casualties,” recounts Pagulayan. “Typhoon Uring brought strong rains, which swept away logs, rocks and sediments blocked by Cogon Bridge. Due to this damming effect, the bridge gave way, releasing water that directly flooded Ormoc City.” According to a Manila Observatory report in 1992, the flood reached a peak height of 7 feet.

U.S. Marines brave a river on their way from search and rescue operations in Guinsaugon.

Floods are not the only danger brought by heavy rains. In 2006, non-stop rains over a two-week period plus a minor earthquake caused a massive landslide in Guinsaugon at past ten in the morning. More than half of the population of the Leyte town, which housed about 1,800 residents, were wiped out. This included around 246 students who were still in school at the time. “The released rainfall was equivalent to almost a month’s worth of rain,” says Pagulayan.

The Role of Climate Change

Despite the fact that the Philippines is prone to tropical cyclones, Pagulayan believes that the effects of climate change are clear. “Its impacts are very glaring on the frequency, magnitude and severity of tropical cyclones. Typhoons are stronger. Extreme rainfall events happen more frequently. Floods are higher and more widespread. Places that used to be safe from floods now experience flooding.”

In the WMO press release, WMO Secretary-General Prof. Petteri Taalas echoed this observation. “Weather, climate and water-related hazards are increasing in frequency and intensity as a result of climate change,” he said. “But, increasingly, heavy rainfall episodes also bear the footprint of climate change. As the atmosphere gets warmer it holds more moisture, which means it will rain more during storms, increasing the risk of floods.”

According to Pagulayan, although climate change is a significant driver of catastrophic events, human activities are also a main contributor. “The changes we’ve made in our landscape and environment has increased disaster impacts. Human intervention has worsened these disasters.”

Why the PH Is Especially Vulnerable

Because of this, data from the Philippines is crucial for other countries’ disaster preparedness. “The WMO Global Telecommunication System (GTS) lets us exchange data with other countries. If you recall, the damage and casualties in Vietnam caused by Yolanda weren’t as severe as in the Philippines. I think Vietnam only had less than ten casualties. This was because of the information we sent, which became the basis for their preparation. This is our valuable contribution to the WMO when it comes to information exchange. Other countries use our data for analysis and preparation,” said Pagulayan.

What We Can Do Against Water-Related Hazards

Disasters may wreak havoc, but we are not entirely powerless over them. We can do the following to strengthen preparedness:

Professor Taalas stressed the urgency to act on climate change. “No country – developed or developing – is immune. Climate change is here and now. It is imperative to invest more in climate change adaptation, and one way of doing this is to strengthen multi-hazard early warning systems,” he said.

Pagulayan admits that because of unpredictable patterns caused by climate change, weather conditions and impacts are getting more and more difficult to forecast. “However, PAGASA is constantly improving its forecasting methodologies and products so they can tailor-fit the needs of different LGUs (local government units).”

PAGASA and government agencies constantly release a wealth of information. Still, these need to be laymanized to be better understood by the public. According to Pagulayan, Filipinos must also be educated more on disaster effects. “We regularly issue warnings on floods, rainfall and thunderstorms. But the public needs to understand their impacts. For example, we experience thunderstorms almost every day now, but what are their impacts when I’m outside? Inside the home or in school? We need to better teach Filipinos the impacts of these weather systems.”

Tropical Storm Ondoy in 2009 opened our eyes to the severe garbage problem in Metro Manila. Trash clogged river systems, impeding the flow of flood water from the continuous rainfall. As a result, parts of NCR were submerged, affecting over 4 million individuals according to NDRRMC.

“For me, learning proper waste disposal is doable,” says Pagulayan. “We need to be self-disciplined. Environmental efforts like tree planting may seem small, but when they all add up, they can make an impact.” She adds, “Sometimes, we’re so busy looking for a grand plan that we overlook the little components. Practical but doable acts like environmental restoration and management are very important.”

How Environmental Care Protects Us From Disasters

Expect these Climate Conditions for the Rest of the Year

Heat Waves, Climate Emergency, and the Race for Human Survival